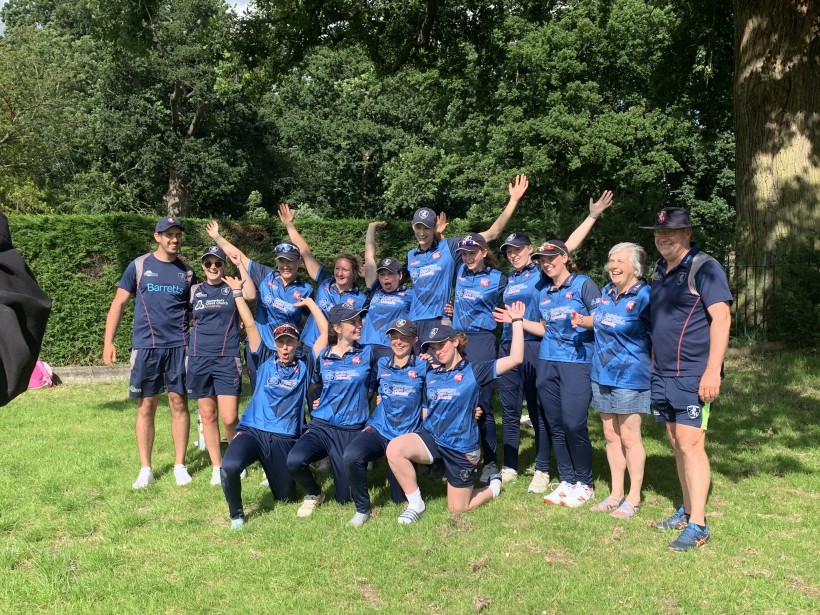 Two innings-anchoring scores of 43 and 48 from opener Maxine Blythin and wickets from Alice Davidson-Richards steered Kent Women to two wins in their final two matches of the season in the Vitality Women’s County T20.

In the first of three scheduled T20s hosted by Hampshire at Aldershot CC, Kent Women first took on Hampshire and after winning the toss and choosing to bat, looked to score quickly and efficiently.

Opener Blythin lost her first-wicket partner Kirsty Dymond who retired not out on 13, meaning number three Alice Davidson-Richards took up the mantle as an ‘opener’.

The pair took Kent up to a score of 95 before Blythin’s wicket fell, departing for 43 from 45 balls with five fours.

‘ADR’ continued to work hard squeezing out runs from Hampshire’s bowling attack and when she was out, caught Fi Morris bowled Providence Cowdrill, only eight of her 34 runs came from the boundary rope.

T20 skipper Tash Farrant scored 13 in nine deliveries faced, before a flurry of wickets saw Kent reduced to 125/5 after 20 overs – three wickets falling without gaining a run in a process.

Alice Davidson-Richards came into the attack fresh from taking the wickets of Australia stars Meg Lanning and Ellyse Perry for England Academy Women this weekend and struck again, this time dismissing Samantha Betts for two (caught by Kalea Moore).

Jelfs was again at hand to contribute to wickets, taking the catch to dismiss the dangerous Maia Bouchier who had scored 42 runs with four fours and a six from Chelsey Rowson’s right-arm medium delivery.

What happened next could arguably have been called “The ADR Show” as Davidson-Richards had a hand in four of the next five wickets to fall.

She dismissed Fi Morris for eight, again the catch taken by Hannah Jelfs, before switching roles to provide the safe hands as she grabbed an uppish shot from Katie George to give Tash Farrant her first wicket.

Grace Scrivens was then at hand to provide the role of fielder for Davidson-Richards’ second wicket, Emily Windsor suffering a golden duck in the process.

Davidson-Richards dished out another golden duck, this time bowling Charlotte Taylor, after Maxine Blythin had run out Lucia Kendall for 10.

The Horses came out victorious by seven runs and went straight into their next game against Cricket Wales Women.

Aldershot’s morning sunshine had been joined by rolling clouds going into the second game of the day and Kent’s last of the season, this time Cricket Wales choosing to field after winning the toss.

Blythin again asserted her authority at the crease, although she was unable to find a consistent batting partner as she made 48 runs from 54 balls with six fours and was Kent’s eighth wicket to fall.

Kirsty Dymond was dismissed for two, before Tash Farrant and Alice Davidson-Richards both departed without scoring.

Chelsey Rowson only made six runs before being bowled by Alexandra Griffiths, who then struck again to get Grace Scrivens out for one, caught by Rachel Priest.

Coco Streets made two on debut for the Horses after coming up through the Kent County Age Group squads, and Megan Belt only made one from two balls before being caught out by Claire Nicholas, bowled by Ffion Wynne.

Kalea Moore (12) and ‘keeper Lauren Griffiths (15) were the only two Kent batters other than opener Blythin to score double figures, and Kent ended up all-out after 19 overs for 91.

Cricket Wales’ bowler Gabby Basketter suffered an injury that required a hospital visit in the first innings which meant that Cricket Wales only had nine wickets in the second.

The Horses made the perfect start defending 92 when Tash Farrant led her team by example, trapping Cricket Wales opener Lauren Parfitt for a second-ball duck, the third ball of the innings.

Davidson-Richards got back into her wicket-taking groove by bowling Parfitt’s opening partner, Rachel Priest, for seven; and when Farrant struck again to bowl Alexandra Griffiths for another duck from four balls, Cricket Wales at one stage were 9/3.

After Danielle Gibson was run out for three to leave Cricket Wales on 12/4 and Lydia Clements bowled Rowson caught Farrant to make it 18/5, Claire Nicholas and Bethan Gammon were the first pair to put up resistance to Kent’s rampant bowling attack.

The pair put on a partnership of 31 before Gammon was bowled by Hannah Jelfs for 14.

As the match started to draw to a dramatic climax, Cricket Wales started to pick up runs before Nicholas finally fell LBW to Megan Belt for a top score of 24.

With Cricket Wales needing more than a run a ball on a difficult track, risks were taken running between the wickets and Naomi Davies was run out by Farrant, just before Chelsey Rowson removed Sara Jenkins, caught Jelfs two balls later for none.

Cricket Wales would’ve needed 20 more runs from the last three overs with one wicket remaining, but due to Basketter’s injury, Kent were declared winners by 19 runs.

The two wins cap off what has been a fantastic season for Kent Women, after having already won the Royal London Women’s County Championship and having now secured a third-placed finish in the Vitality Women’s County T20.