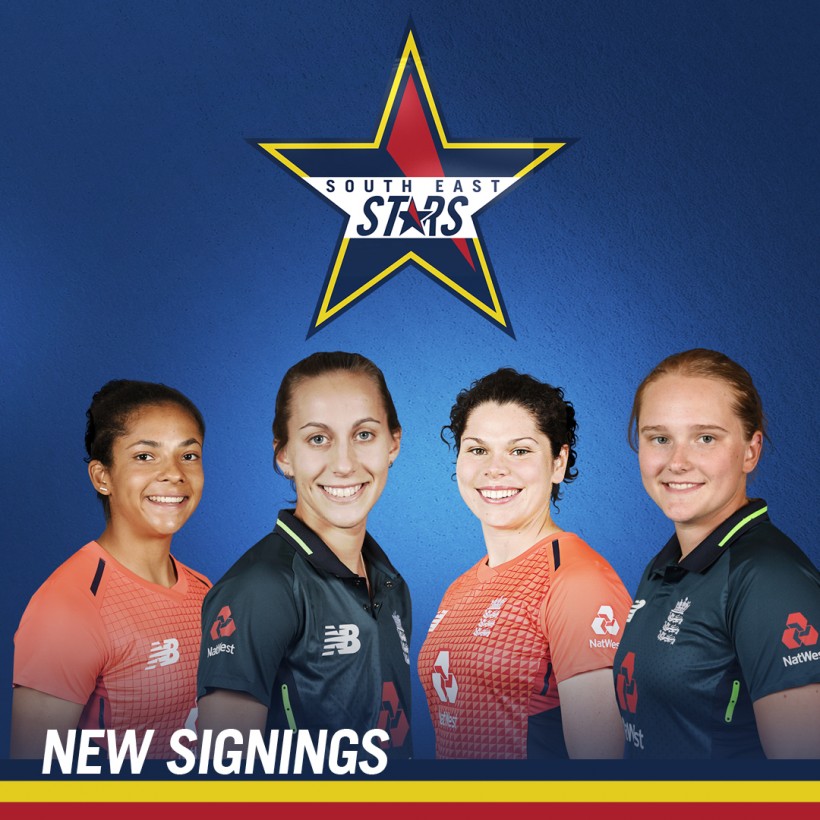 Operating in partnership with both Kent & Surrey County Cricket Clubs, with Surrey acting as the regional host and Beckenham as the regional performance centre, South East Stars is to be the official name of the first XI and academy teams at the centre of excellence that covers the two counties.

This historic occasion sees the four players named as part of the first cohort of domestic professional cricketers in the female game in England and Wales.

Today also sees the launch of the region’s identity in the form of its logo; a five pointed star comprising of red, yellow, white and dark blue.

While it remains to be seen whether the effects of COVID-19 will allow the Stars to begin a match programme in 2020, all eight regions have continued to make plans in preparation for the return of performance level cricket.

All-rounders Smith & Dunkley, who play their county cricket for Surrey, will be contracted with South East Stars until October 2021 as will Davidson-Richards, who has represented Kent throughout her career.

The three players, currently on England rookie contracts, are actively involved in the England Women’s return to training programme and will become full-time cricketers at the South East Stars once the ECB transition them across from their current deals.

England and Kent seamer Farrant will be on a retainer contract which will switch to a full-time deal come the end of the 2020 season.

It is hoped that a final fifth full-time contract can be allocated following the 2020 season to conclude the signings of the South East Stars’ group of domestic professionals.

Introduced as part of the ECB’s plans to transform women’s and girl’s cricket, the new structure sees the formation of eight regionalised centres of excellence for both established players and talented youngsters with the support of traditional counties, who will continue to operate separate sides at county level and age-group pathway programmes.

In addition to providing year-round training programmes and the first ever domestic professional contracts for up to 40 players up and down the country outside of those with an ECB central contract, this new structure will see regions face each other in regional competitions to best prepare players for international cricket.

South East Stars’ home matches are likely to be staged at numerous grounds in both Surrey & Kent with exact locations, dates and times to be finalised once a start date has been agreed.

Regional Director of Women’s Cricket Richard Bedbrook, who is responsible for both the elite senior team and academy programme in the area, said: “I’m delighted to have secured the services of four excellent international cricketers on full-time contracts with the South East Stars.

“It’s such an exciting initiative to start building the first professional Women’s cricket teams outside of the International area in England and to have four players at this stage, all of whom have the ability to knock on the International door, is really pleasing and provides some real drive for this region to help these players develop to realise their ambitions.

“It’s important that everyone can be prepared for cricket this summer and the retainer contract for Tash in particular provides her with some peace of mind to be able to focus on keeping fit and ensuring she’s ready to go when we get the call.

“As well as playing for the South East Stars, the professional players in the setup will have some responsibility towards helping to grow the game and inspire girls in the region to pick up a bat & ball.

“These four have all demonstrated a positive attitude in terms of growing women’s cricket in London & the South East and I can’t wait to start working with them, whenever that may be possible.”

A right-arm seamer and top-order batsman, Davidson-Richards has won five Women’s County Championships and three National T20 titles to date with Kent. After making her debut in 2010, ‘ADR’ has represented Kent Women for ten seasons, as well as featuring for Yorkshire Diamonds in the Kia Super League and was selected by Northern Superchargers in The Hundred.

A top order batter and skilful leg-spinner, Dunkley joined Surrey from Middlesex this winter after playing alongside a number of the county’s regulars, including Smith, in the Kia Super League side Surrey Stars. The 21-year-old has played in 10 T20Is since making her England debut in November 2018 and had been signed by Southern Brave for The Hundred.

Left arm seamer Farrant made her Kent Women debut in 2012, taking figures of 5/9 in her first appearance. She has won five major trophies in her Kent Women career to date, and was one of the first women players to receive an ECB central contract in April 2014. Farrant was also a part of the England squad during the 2018 ICC Women’s World T20. In The Hundred draft, Farrant was selected by the Oval Invincibles, after starring for the Southern Vipers in the Kia Super League since 2016.

Big hitting 22-year-old Bryony Smith has been a focal point at the top of the Surrey order for a number of years, making three white-ball centuries in the last two summers alone. She has played in three T20Is and one ODI for her country and was due to feature for Welsh Fire in the first edition of The Hundred this summer. As well as a top order batsman, Smith is a highly effective off-spinner.

Keep your eyes peeled across both Surrey’s & Kent’s existing channels for more announcements on the South East Stars in the coming weeks.

The Spitfire Sessions: Kent in the 70s