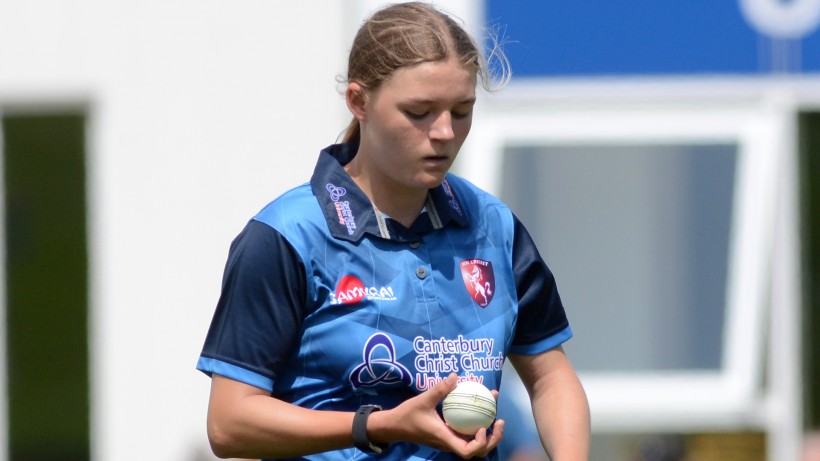 Surrey Women defeated Kent Women by eight wickets to take bragging rights away from The Nevill Ground in Tunbridge Wells on the first day of the new Women’s London Championship.

Kent won the toss and chose to bat, giving a Kent debut to Scotland international ‘keeper-batter Sarah Bryce, amongst what was a talented young Kent line-up, including 50-over debutant Coco Streets and Kent debuts for Indigo Gentry and Sydney Gorham.

The Horses’ opening partnership of Grace Scrivens and Sarah Bryce was worth 35 runs, before Scrivens was given out caught by Kira Chathli from the bowling of Beth Kerins.

Kent’s 2019 Women’s Player of the Year Maxine Blythin could only open her 2020 batting account with two runs before departing with Kent on 44/2, bringing Susie Rowe back to the crease on her first Kent appearance for eight years – a Club record gap between matches.

Disaster struck for the returning Rowe as an injury picked up while batting forced her to retire not out on just 11 runs, with only Ryana Macdonald-Gay’s score of 28 and Tash Farrant’s 18 the only double figure scores of the batters in the middle and lower order.

Surrey’s Alice Capsey was the pick of the visitors’ batters with an unbeaten score of 70, as Surrey only lost two wickets on their way to surpassing Kent’s total of 138 all out in just 27.2 overs.

Kent next welcome cross-Thames rivals Essex to The Mote CC in Maidstone on Thursday 6th August.