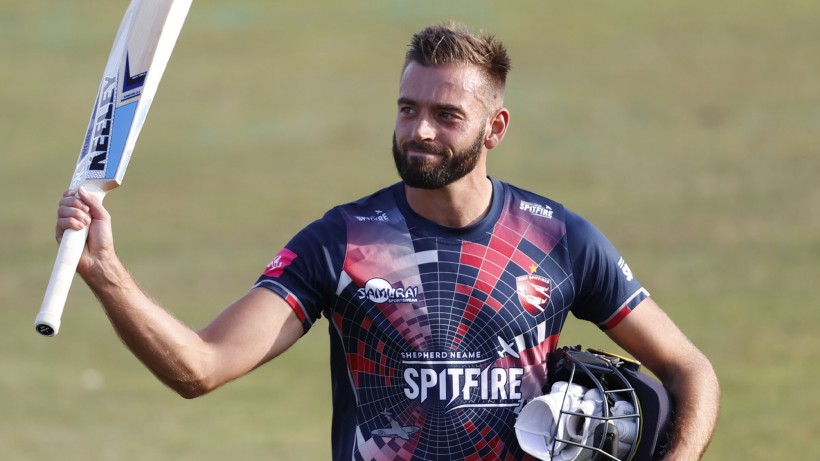 One of Kent’s newer recruits and record-breaker Jack Leaning has told the Club that he feels settled in his new home in the county, and can’t wait to compete wearing the White Horse once more in 2021.

The Yorkshireman the county in the midst of the first lockdown back in the Spring of 2020, although he says that that situation may have actually helped his move: “If anything it’s certainly let me settle in well to where I’m living in Kent.

“I already knew a few of the lads from playing against them and I’d met up with Daniel Bell-Drummond in Sydney a couple of times, too.

“It felt like a seamless transition, really. It’s quite an easy dressing room to come into as well, everyone’s been very welcoming.”

But who has he got on with the most since joining? “To start with I got on with Adam Rouse and Sean Dickson quite a lot.

“We played a lot of golf together and I still see a lot of ‘Dicko’ when he’s back down from Durham but I get on really well with everybody to be fair.

“I also play a lot of Call of Duty online with Jordan Cox!” We’re then assured that their partnership ‘in Verdansk’ isn’t quite as effective as it is on the cricket field…

“As I’ve said, it’s a really easy dressing room and I think I’ve made quite a few close friends already.”

Leaning’s unbeaten partnership of 423 with Cox broke every partnership record in Kent’s history books, but the 27-year-old didn’t know the gravity of their achievement until the evening after their success: “I knew we were probably going to be up there in a few records.

“But it wasn’t until that evening and the next day that I went on social media, spoke to a few of the guys, and found out that we’d actually set the highest partnership record.

“I was quite keen to make an impression early on in my Kent career, but I didn’t think it would be as sizeable as that one!”

And after some strong performances during the 2020 Vitality Blast, Leaning is looking forward to playing for Kent in three forms of the game this season: “Last season was good for me but it was almost like a little bit of a ‘taster’ – we got going and then it felt like it was all over again.

“Hopefully this year we can get a full season in and I can get to play in all three formats, have another good year and build on what I’ve started.”

As with the majority of Kent’s playing squad, golf seems to be the second sport of most of the players. When asked who he would pick to win a golf tournament to save his life, Leaning soon made it clear that: “I think ‘Stevo’ [Darren Stevens] would probably want me to say him!

“I’ve played quite a lot with Stevo, although Zak Crawley isn’t far away from him. They’re both pretty good and I’d feel in pretty safe hands with either of those two.”

Aside from golf and video games, Jack has also taken his fitness work seriously over the Winter period.

“I’ve tried to keep my fitness up and I’ve dived into that quite strongly. It’s always been something I’ve enjoyed doing, but lockdown has been a chance to do my own stuff and to get out and explore the streets where I live.

“There’s probably not a road in four square miles of my house that I haven’t run down now I don’t think.”

“As well as running, I’ve also tried to work my way through a few different series on Netflix. My Mrs. is also home-schooling early years kids – I’ve probably learnt a fair chunk of their syllabus too over the last couple of months whilst she’s been teaching them!”

And following the announcement that Channel 4 had secured the rights to England’s Test series in India starting on Friday, Jack hopes that this will spark renewed national interest in cricket.

“I think it’s brilliant because it means that more people are going to be watching our game.

“I think I’m right in saying that the first real Test series that I remember watching probably was the 2005 Ashes that was also on Channel 4 back in the day. I could still go back and watch that series now – it still gets goosebumps going up the back of my neck.

“That’s really what inspired me when I was growing up, wanting to play for England and do the same things as these guys are doing on TV.

“Hopefully more kids and families will be able to watch the sport that I love and it will have the same impact on them as it had on me when I was younger.”