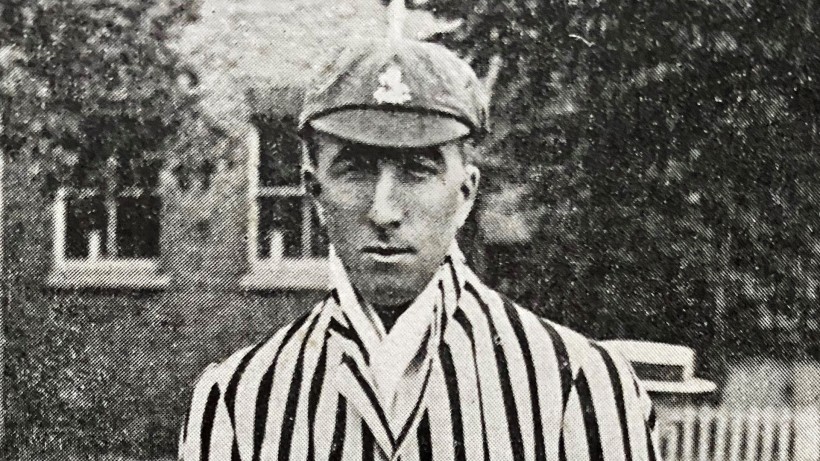 Over the many years when it was considered de rigueur for a county team to be captained by an amateur, Kent were more fortunate than most in that only rarely were they obliged to call upon someone as skipper who would not have otherwise been able to justify a regular place in the side.

Equally important perhaps, he played a major role in the career of ‘Tich’ Freeman, guiding and encouraging him, placing his field, and teaching him to detect and exploit weaknesses in opposing batsmen. Although difficult to prove one way or the other, it has been suggested that ‘Tich’ Freeman was never quite the same bowler under any other captain.

Lionel Troughton was in the Eleven at Dulwich in 1897 and played his first game for Kent Second XI, against Sussex at Tunbridge Wells, in 1900. Over the next half dozen seasons he continued to make intermittent Second XI appearances and in 1906 hit his first hundred, 105 v Middlesex Second Eleven at his home ground, Gravesend.

In 1907, following successive scores of 82 v Middlesex Seconds at Lord’s and 90 v Sussex Seconds at Hove, he got his chance in the first team, hitting 46 against Essex at Leyton and sharing a 108-run fifth-wicket partnership with Wally Hardinge.

When Dillon stood down as captain at the end of the 1913 season, quality amateurs able to spare time for a season’s cricket were a rarity and, although in the words of the 1915 Wisden, ‘not up to the requisite standard as a batsman’, Troughton, as Second Eleven captain, was the obvious choice.

He led the side in 30 matches and, all things considered, his first year went well. Kent won 17 Championship matches, losing seven with six draws and finishing third behind Surrey and Middlesex in what, overshadowed by the imminence of War, turned out to be a fairly meaningless season.

At the end of the season, Troughton enlisted as a private in the 18th Battalion Royal Fusiliers (the Public Schools Bn.) and five months later was commissioned as a Temporary Second Lieutenant in the 10th (Service) Battalion Rifle Brigade, the requisite references provided by two County colleagues – William Sarel, an officer in the Battalion, testifying to his character and Lord Harris to his education.

In July 1915 the Battalion arrived in France, part of 59 Brigade, 20th (Light) Division. The Division took part in the later stages of battle of the Somme and in August/September 1916 suffered very heavy casualties in the Battle of Guillemont where Troughton, one of only two officers to emerge unscathed, was awarded a Military Cross for conspicuous gallantry in action.

‘He led his men with great determination, reforming at each objective and then leading them on. Between the first and second objective he took a rifle and rushed forward, firing into the enemy trench. Finally he found himself in command of the Battalion and consolidated the objective under heavy fire’.

In March 1917, when his Commanding Officer was wounded in a training accident, Troughton, now a Temporary Lieutenant Colonel, was formally appointed to command of the Battalion and in April was awarded the Legion d’Honneur.

Under his command the Battalion made a successful attack on Metzen Courtureng, took part in the Third Battle of Ypres and in the capture of Bourlon Wood. In November 1917, by now tired, understrength and containing a high proportion of under-trained reinforcements, they participated in the Battle of Cambrai.

In the closing phase, on 30th November, the counter-attacking Germans employed for the first time on a major scale the infiltration tactics which they would later use to such effect in their March 1918 offensive

By the end of the day 20th Division had lost almost half its strength in killed, wounded and prisoners. Troughton’s Battalion, like several others was overrun, his headquarters surrounded and he, together with seven surviving members of his staff, joined more than 6,000 British prisoners taken that day.

Troughton’s obligatory official account of his capture written after he was repatriated in December 1918 makes poignant reading and, on first returning to civilian life, he was reputedly reluctant to socialise for a while.

Fortunately he was able to carry on where he left off as Kent captain and in 1919 came agonisingly close to winning the Championship.

He ended his County season with 388 runs (avge.25.86). Kent remained in contention for the Championship until the last match of the season.

Matches in 1919 lasted only two days and the title was decided on percentage of wins to matches played. With Yorkshire playing 26 matches and Kent (and five other counties) only 14 the method had obvious faults. When the last round of matches began, Yorkshire had 12 wins in 25 matches, Kent six in 13. If both sides won, the title would be shared; if only Yorkshire won they were Champions, if Yorkshire failed to win and Kent won, Kent were champions.

The first day of Yorkshire’s game at Hove was rained off making a draw inevitable. At Lord’s, Kent made Middlesex follow-on but when stumps were drawn the home side were 12 runs ahead with one wicket standing. Yorkshire were Champions with 46.15% to Kent’s 42.85 %.

Kent never again came quite so close between the Wars but, despite an unbalanced attack relying largely on spin, during the remaining four years of Troughton’s captaincy they were never out of the upper reaches of the table – fourth in 1921 and 1922, fifth in 1920 and 1923.

Their most successful season was 1922 when they won 16 and lost only three. Gloucestershire, Sussex, Warwickshire and Worcestershire were all beaten twice and two of the defeats were at the hands of Champions Yorkshire, at the time easily the strongest team in the country.

In 1925 he married Gwendeolen Henderson (1893-1968) in Canterbury and settled at Court Lodge, Bishopsbourne. There was one son. While at Bishopsbourne he did much to encourage local cricket and, partly through cricket, renewed his friendship with the author Alec Waugh whom he had first met in Karlsruhe while they were POWs.

Troughton was involved in Kent Cricket’s administration almost from the beginning.

He was still Manager when he died in Guy’s Hospital, like his predecessor, dying ‘in harness’. At his funeral service in Canterbury Cathedral the address was given by the Essex batsman Canon FH Gillingham.

At 11:00 on Wednesday 11th November, Kent Cricket joined up with the 3rd Battalion, Princess of Wales’ Royal Regiment to pay respects to those from the Club and beyond that made the ultimate sacrifice.

A short video of the socially distanced Remembrance Service at The Spitfire Ground, St. Lawrence can be found below.

Bell-Drummond signs for Colombo Kings in the LPL