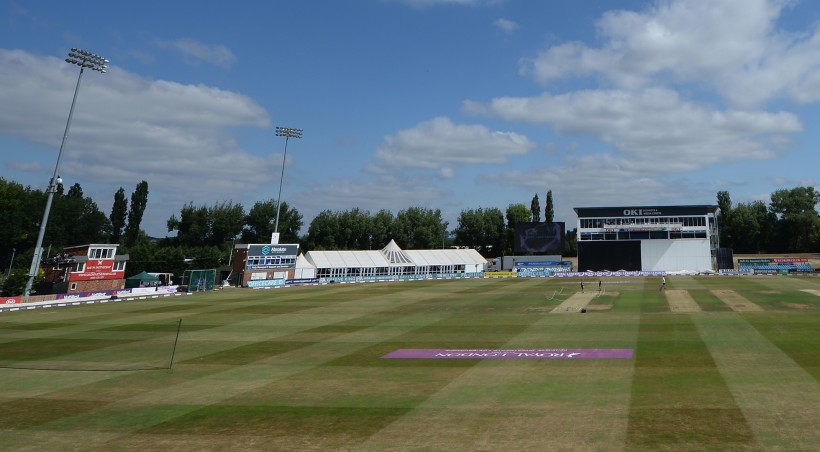 Kent’s away match at The Incora County Ground is their final trip of the 2021 LV= Insurance County Championship, taking on Derbyshire.

Kent completed a hat-trick of LV=Insurance County Championship victories when they beat Derbyshire by 130 runs in the Division Three match at Derby.

After Kent declared on 211 for 2, setting Derbyshire an unlikely 341 for victory, the home side were bowled out for 210.

Only an eighth wicket stand of 70 between Anuj Dal,58 not out, and Ben Aitchison,36, spared Derbyshire from complete humiliation

Kent batted on for nine overs in the morning, adding 64 with Jordan Cox falling for 81 attempting a big shot against Matt Critchley.

Daniel Bell-Drummond dispatched Critchley for six on his way to an unbeaten 51 and the declaration set Derbyshire a target that was purely notional given their batting woes this season.

A more realistic target was to bat out the day but once again, the top order crumbled and by lunch, Derbyshire were facing defeat.

Harry Came was the first to go when he followed one from Stewart that moved away and Leus du Plooy bagged a pair when he was pinned in front first ball by a full delivery.

Billy Godleman denied Stewart a hat-trick but after a brief recovery, two more wickets fell before the interval.

Wayne Madsen played across a swinging delivery from Harry Podmore and was lbw for 13 and Godleman followed him to the pavilion in the next over.

The Derbyshire captain miscued a pull at Nathan Gilchrist and was caught at square leg for 27 to leave his side in disarray on 67 for 4 at the interval.

It was now just a question of how long Derbyshire could delay Kent but the visitors were soon back in business.

Tom Wood lost his off stump as he played forward to Jas Singh and Gilchrist claimed his second wicket in the next over when Critchley edged to second slip.

Gilchrist found late movement to have Brooke Guest caught behind but Dal and Aitchison finally offered some resistance along with a few muscular blows before the latter miscued to mid off.

Sam Conners, batting with a runner after turning an ankle, helped Dal take the game to tea but Gilchrist sealed victory with the fifth ball of the final session.

Kent head coach Matt Walker said: “We certainly made a point of trying to get the lads to make a statement in these last four games of the season and three from three is exactly what we ordered.

“All three games have been well won, we’ve dominated most of those games if not all of them.. We lost the whole day to rain yesterday so to still win fairly comfortably shows we’ve played some good cricket this week.”

Kent’s advance towards a third LV=Insurance County Championship victory was held up when the third day of the match against Derbyshire at Derby was washed out.

Rain throughout the morning prevented any play before lunch and with no sign of the weather improving, it was no surprise when the umpires decided to call the game off for the day at just after 2pm.

But with better conditions forecast for tomorrow (Wednesday), Kent are still well placed to complete a hat-trick of wins in Division Three.

They are currently 276 runs in front on 147 for 1 in their second innings and will fancy their chances against a Derbyshire side who are the only team in the country without a victory in the championship this season.

An incisive new ball burst from Grant Stewart has put Kent firmly in charge of the LV=Insurance County Championship match against Derbyshire at Derby.

The all-rounder ripped through Derbyshire’s top order to take 4 for 6 in nine overs and ended with 5 for 23 as the home side were bowled out for 156 with fast bowler Sam Conners scoring a career-best 39 off 28 balls.

That gave Kent a lead of 129 and when bad light ended play early, they were 276 in front on 147 for 1 with Zak Crawley scoring his second 50 of the match and Jordan Cox an unbeaten 58.

Derbyshire’s frail batting was again exposed by Stewart who exploited overcast conditions to take four of the first five wickets to fall.

Leus du Plooy went to the second ball of the morning which he edged to third slip and Wayne Madsen was the next to go after taking 26 balls to get off the mark.

He edged Nathan Gilchrist to third slip where Jack Leaning leapt to hold the second of four catches and although Billy Godleman and Matt Critchley briefly counter-attacked, the slide continued in Stewart’s second spell.

The pair plundered five consecutive fours off Gilchrist and Jas Singh but Critchley was caught behind driving expansively at Stewart who then brought one back sharply to bowl Tom Wood.

Derbyshire began the afternoon session just as badly with Brooke Guest lbw to the second ball from Harry Podmore and when Anuj Dal became Stewart’s fifth victim, Derbyshire were in danger of following-on.

Billy Godleman fell to a breathtaking diving catch by Leaning at gully for an obdurate 31 off 109 balls but some uncomplicated blows by Conners and Ben Aitchison spared Derbyshire from being asked to bat again.

Despite limping after turning an ankle, Conners struck four fours and two sixes before he swung Podmore to deep midwicket but it was the seventh time in 13 matches this season that Derbyshire had failed to register a batting point.

With Conners unable to bowl, Kent built steadily against a depleted attack before Crawley was caught at mid off for 68 and they closed in a commanding position although rain could hold them up on Day Three.

Kent all-rounder Grant Stewart said: “It’s always good to get five-for personally but I was well supported by the other boys and we caught and fielded really well so it was a pretty good all-round performance in the field.

“It’s always a pleasure taking the new ball. It’s a good problem to have with a lot of us queuing up to take the new ball so to get an opportunity to do that I was glad to show what I could do.”

Kent batsman Jack Leaning on his catch to remove Billy Godleman said: “I can’t really explain it, it was just reactions and it stuck. I was pretty happy about it so decided I’d do half a lap around the pitch.

“It was one of those days where it followed me around in the field but I’ve not had that many catches in red ball cricket this year and then they’re like London buses they all come at once!”

Kent took a valuable wicket to end the first day after earlier posting 285 against Derbyshire in the LV= Insurance County Championship at Derby.

Zak Crawley passed 50 for the sixth time in the championship this season but three figures again eluded him as Derbyshire recovered from a poor start.

Jack Leaning scored an unbeaten 82 after Daniel Bell-Drummond made 69 and Crawley 53, but Derbyshire took 7 for 48 after Tea to bowl Kent out for their 285.

Ben Aitchison took 4 for 83 but Derbyshire lost Harry Came to close on 1 for 1.

Derbyshire’s decision to put Kent in was undermined by poor bowling in the first session which allowed the visitors to pass 100 by Lunch.

Two catches also went down with Crawley the batsman on both occasions and the only success for Derbyshire in the morning was the wicket of Jordan Cox who played on as he tried to leave a ball from Aitchison.

But Aitchison and the other seamers offered up to many loose deliveries with Bell-Drummond driving and clipping him for three consecutive fours in the 19th over.

Crawley was missed on 41 by wicketkeeper Brooke Guest who failed to cling on to an edge off Anuj Dal as he dived to his right and the England batsman was dropped six runs later when he drove Matt Critchley to short cover.

Bell-Drummond reached his 50 from 60 balls in the last over before lunch and Crawley completed his in the first over of the afternoon session when he swept Critchley for his seventh four.

But he added only two more runs before he aimed a cut at Dustin Melton and was caught behind.

Bell-Drummond also failed to go on when he prodded Dal to slip but Leaning emerged from a scratchy start to play with increasing assurance.

He took three successive fours off Melton and with Sam Billings, added 95 in 27 overs before Derbyshire hit back after Tea.

Dal clung onto a fierce return catch to remove Billings for 36 before Guest pulled off a smart stumping when Ollie Robinson pushed forward to Critchley.

The last three wickets fell in six balls before Stewart bowled Came in a dramatic end to the day.