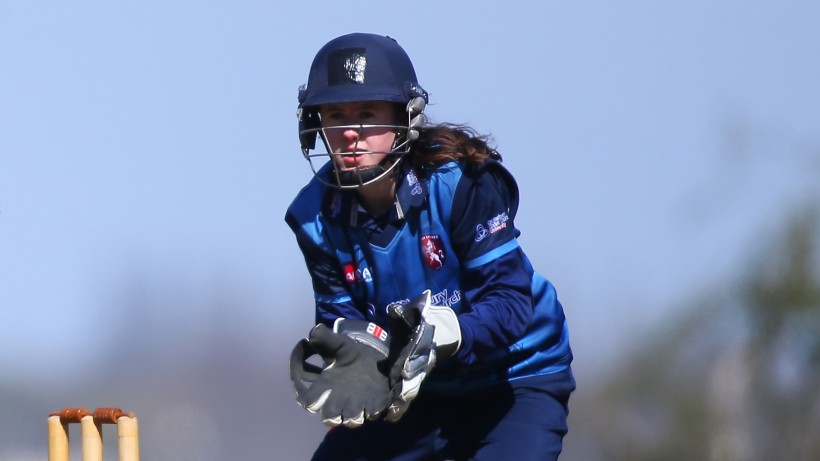 Kent’s Women’s London Championship campaign began with the best possible start as The Horses defeated Essex by 46 runs at Chigwell on Saturday 1st May.

Essex Women won the toss and elected to field in South East Essex on what was a green-top obviously suited to bowling.

Kent handed a debut to young seamer Sydney Gorham, the latest product of Kent’s fabled Female Talent Pathway, whilst England international Kirstie Gordon made her 50-over debut for The Horses.

Captaining the side for the first time, ‘keeper-batter Sarah Bryce opened the batting alongside another Kent youth product, Megan Sturge, and the pair forged a partnership of 55 runs despite difficult batting conditions.

Kent lost Sturge in the 15th over, bowled by Gardner for 17, and worryingly for the visitors, skipper Bryce fell for 32, via the same method two overs later.

If Maxine Blythin, in at three, looked to protect her wicket as Kent looked to rebuild, her new batting partner, the experience Susie Rowe, took a different approach. Rowe continued her mentality from Kent’s two T20 matches against Surrey last week by playing in an aggressive manner, finding the boundary rope twice in the 19th over, upping what was a slow run rate as the Horses went into the middle of their innings.

Rowe and Blythin shepherded Kent past the 100 mark by the midway point with the bat, until Blythin was caught by Hughes form the bowling of castle for 18.

Kalea Moore was out cheaply to a stumping off Macleod’s bowling, but Susie Rowe kept the charge going, reaching her first half century in 50 over-cricket for Kent since September 2011 after 52 deliveries. She eventually lost her wicket in the 29th over, and departed for 63 from 65 balls.

Kirstie Gordon made 14 on 50-over Kent debut and Hannah Jelfs added 19 valuable runs from 19 deliveries but late wickets for the hosts saw Kent post 203 all out from 47.5 overs.

Essex’s reply got off to a good start. Openers Harmer and Macleod put on 58 together before Kalea Moore made the breakthrough, dismissing Macleod LBW for 28.

Trademark sharp Kent fielding helped shift momentum further to the visitors in the next over, when debutant Sydney Gorham and Sarah Bryce behind the stumps combined to run out new batter Bird for one.

If Kent’s dynamic fielding is a trademark, then one of the best proponents of that skill soon chimed in. Hannah Jelfs added another run out to her impressive career tally to send Harmer back to the pavilion for 34 runs.

Essex found themselves 85/3 after 20 overs, above the required run rate, and their rebuilding job seemed to be going at a steady rate of knots until Megan Belt struck – Sarah Bryce with great glovework to stump Castle, the Essex batter departing for 27 off 31.

Then, on 50-over debut for The Horses, Kirstie Gordon struck with her first ball. After dismissing Brown LBW, Gordon then dismissed her replacement, Speed, without scoring in the same over. After another over from Megan Belt, Gordon then struck again wit hthe first ball of her second over – Gardner bowled for six.

Now at 114/7, Gordon’s devastating spell with the ball became clear as a positive result for Essex looked more and more uncertain. Kalea Moore’s off spin got the better of Dalton who was bowled for 18, and Gordon was then also responsible for the dismissal of Poole, caught by Hannah Jelfs for seven, and Essex were 151/9 in only the 39th over.

Moore sealed victory for the Horses against their cross-Thames rivals by bowling Hughes at the end of the 40th over, and Kent picked up all the points on their 50-over ‘WLC’ season opener.

After the match, Kirstie Gordon said: “I’m really pleased to get a win on my first 50-over game for Kent.

“I think it was a really good performance from start to finish – Susie Rowe was excellent with the bat and that set a real platform for the girls to keep that momentum going on a very green, tricky wicket.

“To get what we did was a good score, and we didn’t let them get away with it with the bat. It was a good, clinical performance.”

Kent Women will face Middlesex Women on Bank Holiday Monday (3rd May) as part of Women’s County Cricket Day, but unfortunately under current UK Government and ECB regulations, spectators are not allowed. 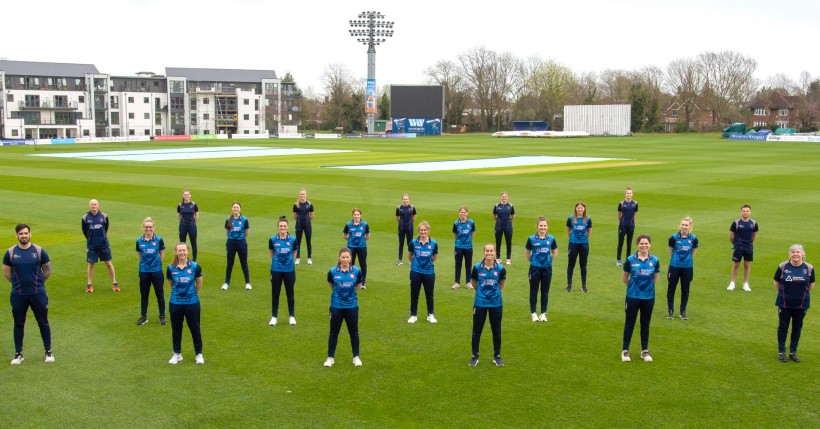