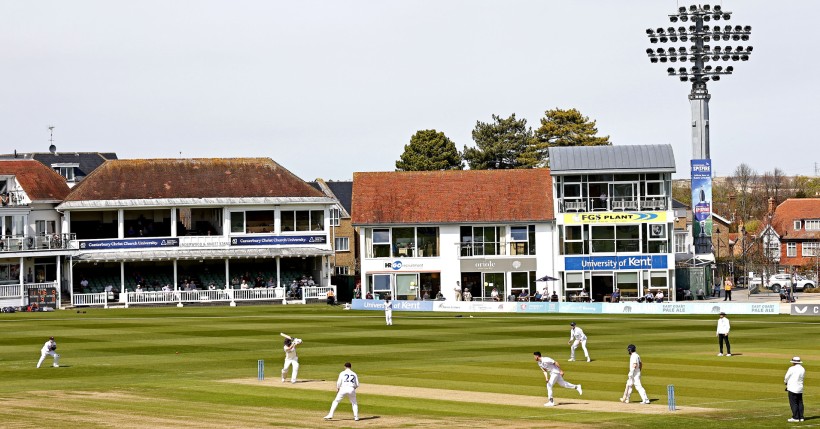 A Kent side with a mixture of youth & experience welcomed Sri Lanka Development XI to The Spitfire Ground, St Lawrence for a four-day, first-class match.

Marcus O’Riordan’s maiden hundred in first-class cricket was a suitable end to a match dominated by the bat as Kent and Sri Lanka Development XI played out a high-scoring draw at The Spitfire Ground, St Lawrence.

The visitors resumed on 573/6 on a sunny Monday at The Spitfire Ground, and Darren Stevens struck twice early on in the day to see the visitors eight wickets down after the first hour.

Thilakaratne edged Stevens to Jack Leaning at slip for 5, and four balls later, and Nipun Malinga was struck on the pads trying to defend an inswinger.

Sri Lanka Development XI decided to declare nine wickets down with a lead of 63, and it was tasked to Muyeye and Marcus O’Riordan to open the batting.

Both batters reached their half century in that over – Muyeye followed by O’Riordan, and both seemed to look assured facing Sri Lanka Dev.’s bowling attack.

The breakthrough for the visitors arrived after 27 overs of Kent’s innings – Muyeye playing the wrong line to try and block Dilum Sudeera’s left arm spin to be hit on the pads and depart for 56.

O’Riordan was joined by Joe Denly as he entered into the 70s, and announced his arrival by coming down the pitch to Sudeera to hit him into the off-side for four. At Tea, Kent were 144/1, leading by 61 runs.

In the evening session, O’Riordan scored quickly as the sight of his maiden first-class hundred drew nearer.
After an hours’ play, the right-hander found himself on 98*, and Kent on 196/1.

He bought up his three figures for the first time in this format in style – emphatically pulling Sudeera to the rope for four runs and sparking handshakes all round as the match ended in a draw.

Maduska and Laseeth Croospulle picked up where they had left off at the start of Day Three, and reached their 200 partnership in the seventh over of the day – Croospulle still a few runs short of his century.

On 99, Croospulle attempted a flamboyant leg glace to be hit outside the line by Podmore, but would bring up three figures two overs later with a push into the off-side for a single.

At 12:30, Madushka bought up his 150 off Hamid Qadri, and would back up reaching the milestone by hitting Qadri into the offside for four.

Agonisingly for Kent, Madushka was dropped at slip in the three balls later, and was then put down again off Jas Singh’s next over from the Nackington Road End.

Singh would be the Kent bowler to end the partnership that had put on 294 runs – Croospulle attempted another aesthetically pleasing lofted on-drive but mistimed for Max Luckett to take the catch at mid-on.

New batter Nuwanidu Fernando looked to assert himself quickly at the middle, and helped build up a quick 50 partnership after only facing 34 deliveries himself – despite Joe Denly coming on to bowl his leg-breaks in his 158th first-class appearance – surpassing the 157 Kent first-class matches played by Lord Harris.

The new ball was taken by Harry Podmore at 14:10, but Fernando bought up his half century in 69 deliveries half an hour later – putting on another impressive partnership for the visitors.

Madushka made the first double century of his burgeoning first-class career by emphatically cutting George Linde to the rope for four, well surpassing his previous best of 169 for Ragama against Tamil Union in 2020.

The 22-year-old’s batting partner Fernando was also searching for three figures when was bowled by George Linde, agonizingly on 99 chopping on, to signal the Tea break.

19-year-old Dartford native Max Luckett picked up his maiden first-class wicket as Dhananjaya Lakshan tried to play off his legs but couldn’t the pace of the delivery to turn round and see his leg and middle stumps uprooted.

Marcus O’Riordan would find Ashen Bandara’s edge for Tawanda Muyeye to reel in for 9, as Madushka looked for a steady batting partner – bringing up his 250 from 366 deliveries at 17:15.

But it was the double centurion that would fall with only 2.2 overs left in the day – pushing at a George Linde left-arm delivery for Billy Mead to take the catch behind.

He had made 269 in 392 deliveries with 37 fours and two sixes – and received a richly deserved standing ovation from everyone at The Spitfire Ground, St Lawrence as he left the field.

A century on first-class debut for Billy Mead preceded an impressive partnership from Sri Lanka Development XI as both sides impressed with the bat on Day Two at The Spitfire Ground, St Lawrence.

Resuming on 418/6, Hamidullah Qadri and Billy Mead were met with an aggressive bowling and fielding attack from the Sri Lankans to begin the day, and Qadri was hit on the helmet by Madushan as he tried to evade a short delivery five overs into the day.

The duo would reach their 50 partnership after an hour of Day Two, but would only find the boundary rope 16 overs into the day as Mead cut Nipun Malinga for four.

After Qadri was dismissed caught-behind off the same bowler for 34, Harry Podmore was the witness of Mead’s half century on debut, coming from 114 deliveries just before the Lunch break.

Podmore & Mead picked up the scoring rate in the afternoon session to around 4.2 an over, and the former reached his fourth first-class fifty in just 66 deliveries.

The two would reach their hundred partnership in 131 deliveries at around 14:25, but Podmore top edged a pull shot for Laseeth Croospulle to reel in, departing for 56.

With Jas Singh now in support, Mead bought up three figures in his first match of first-class cricket in 185 balls with seven fours and one six, and the Kent batters were ushered back to the pavilion for a declaration at 595/8.

The home side made an early breakthrough in the fifth over of the second innings when Sri Lanka Dev. skipper Nipun Dananjaya edged to Tawanda Muyeye at third slip.

Croospulle looked assured in the crease as he scored freely alongside Nishan Madushka, and the pair raced to a 50-run stand with successive boundaries in the 18th over.

He hit debutant Max Luckett back over his head for six in an on-drive fit for the Louvre, before bringing up his half century with an expertly timed cut from the bowling of George Linde for four.

Taking the game to Kent’s bowling attack, both Croospulle & Madushka with over 85 runs apiece to put the impetus back on Kent to take wickets.

Madushka impressively slog swept Linde for six to bring up not only his hundred in 119 balls, but Sri Lanka Dev.’s 200, as the visitors finished the day 201/1.

Century stands from Darren Stevens & George Linde would propel Kent from 95/4 to 418/6 at Stumps on Day One against Sri Lanka Development XI at The Spitfire Ground, St Lawrence.

With Tawanda Muyeye and Marcus O’Riordan opening the batting, the latter making his first first-team appearance of 2022, Kent would make 9 runs for their first wicket partnership, before Muyeye tickled behind for 5 off the bowling of Yasiru Rodrigo in the fourth over.

Joe Denly returned from injury to smash a cut for four to get off the mark, and would make 35 before mistiming a lofted drive to Santhush Gunathilake off the bowling of Dhananjaya Lakshan.

O’Riordan would depart five balls after Lunch, trapped LBW by Lakshan, and in the next over, a further breakthrough came for the visitors – Kent skipper Leaning also rapped on the pads by Udith Madushan to go for 22, Kent finding themselves on 95/4.

46-year-old Stevens would bring up his 34th first-class hundred for the county in only 96 deliveries after the break, as the Stevens/Linde partnership passed 172 runs in only 181 deliveries.

A stand of over 200 was achieved after 64 overs, as Linde & Stevens continually looked to score quickly and took Kent past 305/4.

The partnership would be ended in dramatic fashion as Madushan bowled Stevens, but not before the all-rounder had scored 168 runs in 142 deliveries – evading an attempted cut shot to remove off stump.

Stevens & Linde had put on 265 runs together in quick time – and were only 28 runs short of setting a new record partnership for Kent’s fifth wicket in a first-class match.

Linde would soon see the fruits of his labour after being in the middle for over three hours, with a century on home debut for Kent coming in 133 balls with 10 fours and two sixes – he would fall for 107 but certainly earned the adulation of the home crowd as he left the field.

Debutant Billy Mead would steer the hosts to Stumps alongside Hamid Qadri, and Kent finished the day on 418/6.

On scoring 107 in his first outing at Canterbury, George Linde said: “I’m really pleased to score a century in my first match at Canterbury.

“Hopefully it’s the first of many!”

The oldest rivalry in world cricket resumes as Kent welcome Surrey to The County Ground, Beckenham. 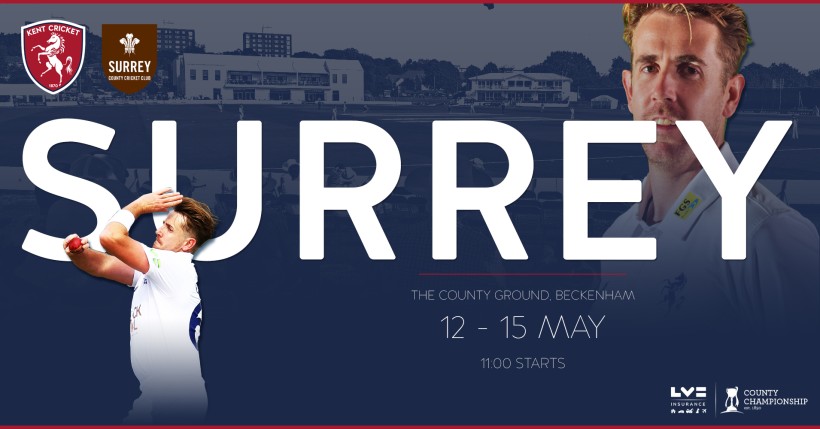