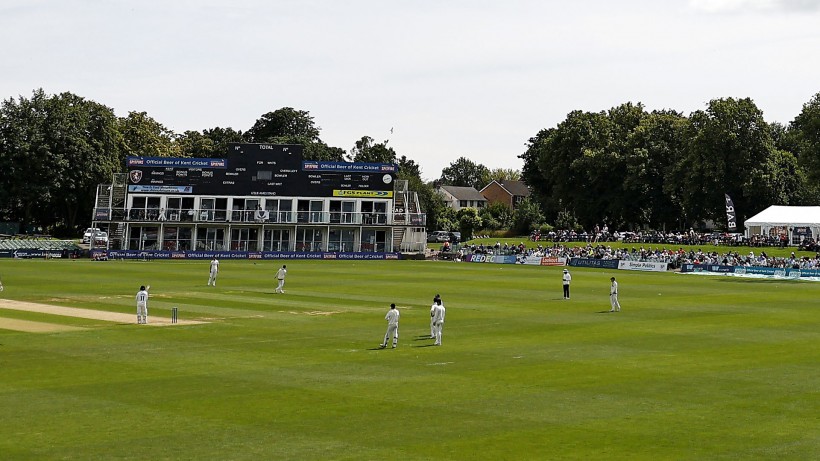 Kent have beaten Worcestershire by an innings and 56 runs on Day Three of their LV= Insurance County Championship match at Canterbury, after dismissing the visitors for 204 in their second innings.

Joe Leach showed some defiance with 49 not out after Ed Barnard had hung around to make 44, but the visitors were left to rue their failings on the first two days, when Kent dominated throughout.

The St Lawrence ground was drenched in sunshine at the start of day three and Kent fans unfurled a “Stevo is God” flag before the start of play, in honour of 45-year-old all-rounder Stevens, the county’s leading run scorer and wicket taker this season.

Worcestershire resumed on 91 for six, still 169 behind and Ben Cox was the first man to go, LBW to Matt Milnes for two in the fourth over of the morning session.

Barnard and Leach put on a partnership of 56 for the eighth wicket, but after holding out for 92 balls the former was LBW to Grant Stewart.

Josh Baker made just a single before Stevens sent his off stump cartwheeling and despite a last-wicket stand of 36,  the victory was confirmed when Dillon Pennington edged Gilchrist to Zak Crawley at first slip for three, five minutes from the scheduled end of the morning session.

Worcestershire are facing an uphill challenge in their LV= Insurance County Championship match at Canterbury, having reached 91 for six at the end of day two, trailing Kent by 169.

Grant Stewart, Nathan Gilchrist and Darren Stevens claimed two wickets each to leave the visitors in deep trouble, after Kent had earlier been dismissed 393, a first-innings lead of 260.

Jack Leaning top-scored with 97 and Sam Billings made a stylish 72 as a substitute after being released by England, while Dillon Pennington claimed four for 80.

Ed Barnard and Ben Cox were the not out batter at Stumps, on ten and two respectively, and with just the tail to come Kent are heavy favourites to conclude victory within three days.

Kent began day two on 184 for four and Darren Stevens was the lone victim in the morning session caught for 66 at midwicket by Barnard off Adam Finch. Kent moved to 265 for five when the new ball was taken and were 274 for five at lunch.

Billings, who was allowed to bat but not keep wicket, produced a high-class innings and brought up his 50 by pulling Pennington for six over square leg, as Kent scored more freely after lunch.

However, Leaning fell three short of his hundred when a Pennington delivery looped off the shoulder of his bat to Barnard at mid-off and Billings skied Josh Baker to the cover boundary, where he was pouched by Pennington.

Grant Stewart was then stumped by Cox off Baker for a punchy 24, Gilchrist was caught behind for eight off Finch and Baker bowled Logan for 12 to leave Matt Milnes stranded on 27 not out.

Worcestershire’s second innings suffered an early blow when Stevens sent Daryl Mitchell’s off stump flying for 14 and after recovering to 51 for one, they lost three wickets for as many runs. Jake Libby was LBW to Grant Stewart for 23, before Gilchrist took two wickets from successive balls. Tom Fell was LBW for 11 and Brett D’Oliveira went for a bizarre golden duck after edging to first slip. Wicket-keeper Ollie Robinson dived across Zak Crawley but failed to grab the ball cleanly. Crawley flicked it in the air and Robinson dived to complete the catch.

Jack Haynes hung around for 68 balls but was LBW to Stevens for 26 and Finch made just one before he was caught behind off Stewart in the penultimate over.

Kent Members in attendance for Day Three of Kent’s LV= Insurance County Championship match against Worcestershire are invited to the first in-person Members’ Forum since 2019 in the Cornwallis Room at The Spitfire Ground, St Lawrence.

The panel, including: Chairman, Simon Philip, CEO, Simon Storey and Director of Cricket, Paul Downton, will be answering pre-submitted questions from the Club’s Members during the Lunch break (scheduled from 12:30) or 20 after the end of play on Tuesday 7 September, whichever is sooner.

Kent lead Worcestershire by 51 runs in their LV= Insurance County Championship match at Canterbury, reaching 184/4 at Stumps on Day One.

Nathan Gilchrist took a career-best five for 39 and Matt Milnes four for 35 as Worcestershire were all out for 133, Ben Cox their top scorer with 41 not out.

Darren Stevens and Jack Leaning were unbeaten on 56 and 52 respectively at the close, after Ollie Robinson hit 50.

Dillon Pennington took three for 39, but after reducing Kent to 22 for three, Worcestershire’s bowlers toiled.

The hosts won the toss and chose to bowl in broad sunshine, a decision instantly vindicated as Milnes removed Daryl Mitchell with the fifth ball of the morning, caught by a diving Jordan Cox in the slips for four.

Milnes then bowled Jake Libby for two before he had Tom Fell caught behind for three and Brett D’Oliveira LBW for one. When Nathan Gilchrist bowled Jack Haynes for eight the visitors were reeling on five for 32 and although Ed Barnard looked well set, he was caught behind off Stevens for 25.

Joe Leach and Cox steered Worcestershire to 91 for six at lunch, during which Milnes became the 220th Kent player to be awarded a County Cap.

The visitors made a steady start to the afternoon session only for Gilchrist to take the final four wickets for 14 runs. Leach’s off stump was pinged back for 38 and two balls later Josh Baker was bowled for a duck after a hideous leave. Pennington was then LBW for three and Adam Finch bowled for two, giving Gilchrist his first five-wicket haul in red-ball cricket.

Kent’s reply started shakily with Pennington removing both openers cheaply, Zak Crawley caught behind for four and Jordan Cox caught by Baker for one. Joe Denly was then lbw to Leach for 9 but Leaning and Robinson put on 75 for the next wicket before the latter was caught behind off Pennington.

Stevens joined Leaning and steered Kent past Worcestershire’s first innings total before reaching his 50 from with a single off Baker. Leaning cut Finch for four to reach his half-century, putting Kent in a dominant position at the end of day one.

Following the conclusion of India’s second innings at The Oval, Sam Billings has been released from England duty and will be able to bat, replacing Marcus O’Riordan.