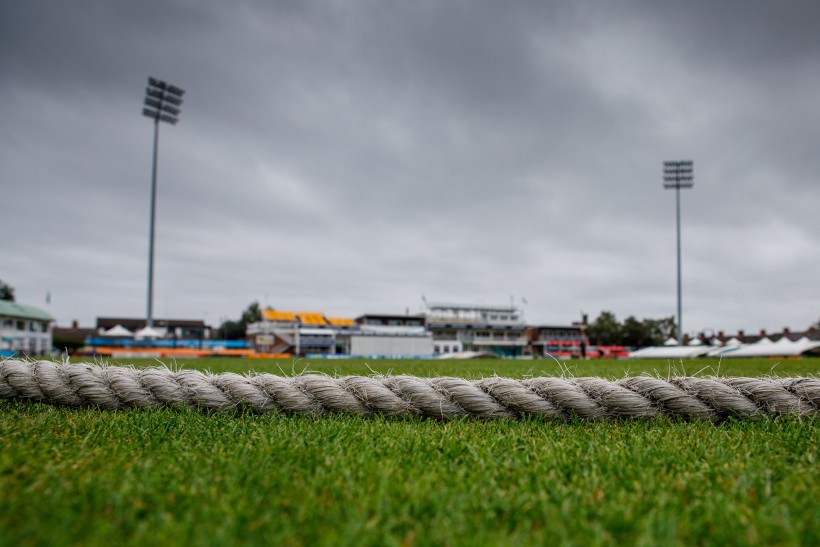 Kent registered a first LV=Insurance County Championship win of the season as Leicestershire were beaten by 132 runs inside three days at the Uptonsteel County Ground, after an extraordinary afternoon that saw the home side avert humiliation with a defiant rearguard action.

Darren Stevens had completed a superb unbeaten century against his former county, pace bowler Matt Milnes finished with a career-best six for 53, but that told only half the story of two sessions of play.

Needing to score an unlikely 386 to win on a pitch aiding spin and in swing-friendly overhead conditions, Leicestershire slumped to 20 for six at lunch.

But an aggressive Ben Mike hit 70 off 52 balls to set off a vigorous wag of the tail that saw Ed Barnes match him with an unbeaten 70 and Will Davis make a career-best 42 as the last four wickets added a scarcely credible 233.

Stevens lit up the early part of the day, transforming his 55 overnight into an unbeaten 107 off just 28 deliveries before Leicestershire were able to winkle out his final partner.

The veteran lofted Mike swept Callum Parkinson for four sixes over the short boundary on the popular side and as he celebrated his 37th career first-class century, Leicestershire  needed no reminding that he should have been out on the second evening on 40 when he hit Barnes in the air to midwicket but neither of two converging fielders made the catch.

What was always a daunting target then soon looked impossible for Leicestershire.

Milnes made his first breakthrough in his third over as Hassan Azad was trapped in front and he could not have imagined he would have a five-for under his belt 21 balls later.

He had Ackerman caught at second slip off a yorker-length ball, bowled Louis Kimber, celebrated a fourth success as Harry Swindells misread the line and a fifth when Lewis Hill was caught behind down the leg side, sending Leicestershire to Lunch at 20 for six from 12.1 overs, Stevens picking up the other wicket with an inswinger to Sam Evans.

But Mike began the afternoon by driving, hooking and pulling three fours in an over to see Milnes removed from the attack and continued apace as he and Parkinson added 77 in 10.3 overs before the introduction of Logan’s spin saw the latter caught behind.

Mike ultimately sliced Logan to wide long off and though the result never looked in any doubt Barnes delayed it with an impressive second first-class fifty, adding 33 with Chris Wright, who was unlucky to be given out caught behind from a ball that appeared to come off his helmet as he went to hook Milnes, and 92 with Davis before the latter slashed at one from Nathan Gilchrist and Kent could celebrate.

Kent’s Matt Milnes, who took a career-best six for 53 in the second innings, said: “It was almost a feeling of relief to get the win in the end. Darren’s hundred gave us the lead and for us then to come out and take early wickets as we did put them on the back foot and pretty much killed the game.

“But credit to their lads, they batted pretty well. Barnes played well and Ben Mike very well but from our point of view we have a bit to learn from that last hour if we want to go to the next level.

“We were creating chances but they seemed to not go to hand. They are allowed to have partnerships and we had enough runs on the board for it never to really be an issue but we maybe need to learn when to go hard and when to sit in a little bit, although nobody bowled badly.

“But what can you say about Stevo? I would say he surprises me every time but he doesn’t any more. I’ve been playing with him for three years and he just keeps doing it. He is just a freak and when and if he retires I don’t think anyone can replace him.”

Kent are in a strong position to secure victory at the halfway stage of their opening divisional LV= Insurance County Championship fixture against Leicestershire.

On a turning pitch, Callum Parkinson, the Leicestershire left-arm spinner, took five for 41, yet at 210/9 in their second innings when bad light curtailed the second day with 22 overs unbowled, Kent had built a lead of 333.

Chief contributor was all-rounder Darren Stevens with a masterful unbeaten 55 after Jack Leaning had added 34 to his first-innings 75 not out and Jordan Cox made 38.

Earlier, Leicestershire had been dismissed for 109, the wickets shared mainly between seamers Grant Stewart (3-20) and Matt Milnes (3-24) and another left-arm spinner, 23-year-old James Logan, who returned three for eight from 8.1 overs in his second first-class match for Kent.

Five down for 66 overnight, Leicestershire achieved their objective of avoiding the follow-on but lost the remainder of their wickets within an hour and a half.

Milnes dismissed Louis Kimber and Ben Mike in his first two overs, both LBW. Logan claimed his second and third successes as Leicestershire lost their last three wickets in the space of 12 balls, Parkinson given out leg before and Chris Wright top-edging a paddle-sweep gently to second slip. In between, Will Davis edged Stewart to third slip.

Ed Barnes was Leicestershire’s top scorer with 22 not out, an innings interrupted by a bang on the head from a short ball by Milnes that saw him leave the field for concussion checks. Happily, he was cleared to return at nine wickets down, confirming his well-being by hitting Stewart for back-to-back fours.

With Zak Crawley looking in good touch, Kent added 49 to their lead in 15 overs without loss but the introduction of Parkinson’s at the pavilion end brought an immediate dividend for the home side as a beautiful delivery to take the England batter’s off stump. Joe Denly was leg before to Ben Mike and Parkinson quickly picked up a second wicket as Cox edged to slip.

As Parkinson changed ends, Barnes had Sam Billings caught behind with his first ball and bowled Ollie Robinson, reducing Kent to 142 for five but by the time rain forced an early tea the lead was 271.

The final session brought two more wickets each for Parkinson and Barnes but 45-year-old Stevens drew on all his experience to hit a six and nine fours in an innings of controlled positivity that may be decisive in the match.

Kent all-rounder Darren Stevens said: “We felt we should have scored a few more runs in the first innings but we executed our bowling plans well. We wanted four wickets on the first evening and we ended up getting five and we felt this morning that if we were patient the wickets would come and that’s what happened.

“There is something in the pitch for the spinner but if it hit that area that turned it generally turned a bit too much, so if you nicked it you were a little bit unlucky. Don’t get me wrong, Parkinson bowled nicely and it was easier against the seamers but with a lead of 120-odd we could go out and bat with intent and we did that well.

“From this position if we bowl anything like we have a good chance, although it is generally a good pitch and if we bowl poorly they will score runs.

“Myself, I was pleased that I stuck to my plans. I love getting down the pitch to a spinner and hitting over the top and I love sweeping, but I didn’t feel I could do that. I looked to play on the offside and it worked well for me.”

A last wicket partnership of 68 helped Kent recover from 116/7 before the visitors picked up five wickets in the final session to finish firmly on top after an entertaining first day.

Kent captain Sam Billings’ decision to bat first raised eyebrows given the solid cloud cover, and Foxes’ seamer Chris Wright certainly found plenty of movement through the air during a testing first spell, dismissing Jordan Cox in his first over with an out-swinger that the Kent opener edged to Colin Ackermann at second slip.

Zak Crawley and Joe Denly responded positively, getting forward as much as possible and putting away the bad ball in compiling a partnership of 76 for the second wicket.

Crawley was particularly impressive off his legs against the seamers, but having reached his 50 off 68 deliveries, the right-hander went back to pull a shorter delivery from Calum Parkinson over midwicket only to find it was a quicker delivery that hurried on to him, beat the stroke and bowled him off his back leg.

Having made the breakthrough, Parkinson followed up, first by producing a delivery that turned sufficiently to take Denly’s edge, Ackermann taking a fine one-handed catch low to his right at slip, and then bowling Billings through the gate to send Kent in to lunch on 96-4.

Three more wickets followed quickly after the break. Ollie Robinson top-edged an attempted sweep at Parkinson to give Lewis Hill a catch at backward square leg, before Wright had Darren Stevens caught at second slip without scoring and then won a leg before decision against Grant Stewart with a full delivery.

However, the Kent lower order dragged the innings back from the brink. Matt Milnes gave Jack Leaning solid support in a partnership of 42 for the eighth wicket before losing his leg stump to Ed Barnes, and although Nathan Gilchrist was run out without scoring James Logan saw Leaning through to his half-century and beyond before he too was run out.

A score that looked no more than competitive looked positively formidable by the close.

Sam Evans was caught by Leaning at third slip after chasing a widish delivery from Milnes before Stewart took the key wicket of Ackermann with a fine delivery which moved away just enough to take the edge.

In gloomy light Stewart followed by bowling Hill off the inside edge, Stevens had Hassan Azad caught behind and left-arm spinner Logan capped off the day by having Swindells leg before with his first delivery.

Kent batter Jack Leaning said: “It didn’t go quite the way we wanted after being 79/1 with Joe Denly and Zak Crawley going nicely, but credit to them, they bowled quite nicely and there were a couple of good wickets in there.

“But the pitch is a tricky one, there’s a lot in it for the seamers and an incredible amount for the spinners, the way they’ve put sand in and dusted the ends, and it’ll be interesting to see how it breaks up over the next couple of days.

“We just tried to dig in at the bottom end and build a few partnerships, and we managed to do that before picking up a few wickets of our own in the final session.”

Get to Finals Day with Bayliss Executive Travel