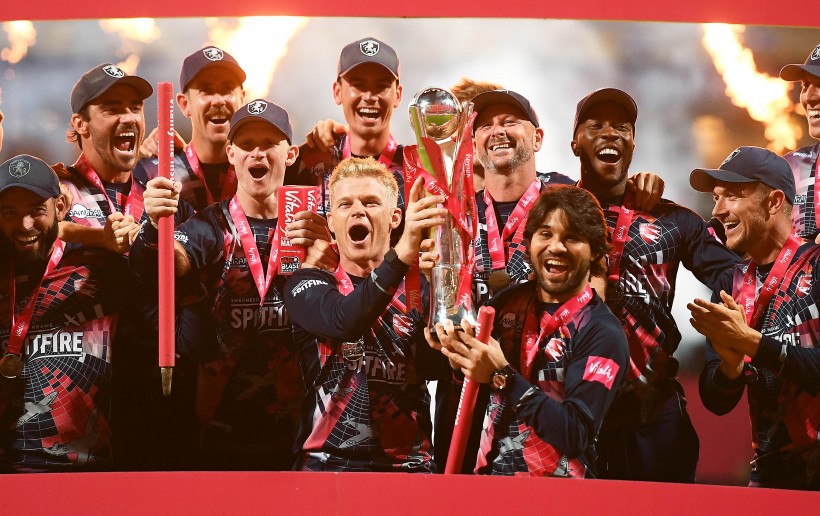 Kent Spitfires ended their 14-year wait for a piece of silverware as they beat Somerset by 25 runs to win the Vitality Blast 2021.

Homegrown 20-year-old Jordan Cox smashed 58 in 28 balls to fire the Spitfires over par with 167 for seven.

The Spitfires looked in control throughout the Powerplay, having been stuck in, before Daniel Bell-Drummond and Joe Denly both fell to Roelof van der Merwe in consecutive deliveries.

Bell-Drummond’s pull to midwicket was a regulation catch but Tom Abell’s sprint back off the ring 20 yards towards the boundary before pulling out a full stretch over the shoulder dive was mind-blowing.

A slowing Edgbaston pitch made going tough for the batters as a large total looking almost out the question when Jack Leaning clubbed a slower ball to square leg to leave the Spitfires 111 for five with four overs to spare.

But Cox, who had fallen first ball in the semi-final, flared up in sensational style.

Having been 20 off his first 17 balls, before cutting Craig Overton to the boundary, he reached his half-century in 26 balls following a swivelled and then flicked sixes.

He rounded off the innings with pyrotechnics going six-four-four off Josh Davey to lift 56 in the last four overs, and Kent to just one fewer than their 168 vs Sussex earlier in the day.

The chase couldn’t have started much worse for Somerset as Tom Banton was stumped second ball and Lewis Goldsworthy skied to point – leaving them three for two.

Tom Abell and Will Smeed rebuilt with a risk-free 58-run stand and although the former was snared at backward point.

The latter continued but earned a life in bizarre circumstances; Cox completed a catch on the boundary but slide tackled by Bell-Drummond, who had slid into the boundary cushion. Third umpire Neil Bainton adjudged it not out and a six, although three balls later Cox caught Sneed for 43 without controversy.

Cox was back at it with an outrageous scurry around the raucous Eric Hollies Stand boundary, leap and palm off to Matt Milnes to affect the wicket of Lewis Gregory before van der Merwe pinged to cover – Somerset losing five wickets for 34 in the middle overs.

Somerset, for the 24th time in all competitions and fourth time in the Blast, were confirmed as runners-up when they failed to knock off an impossible 48 in the last over.