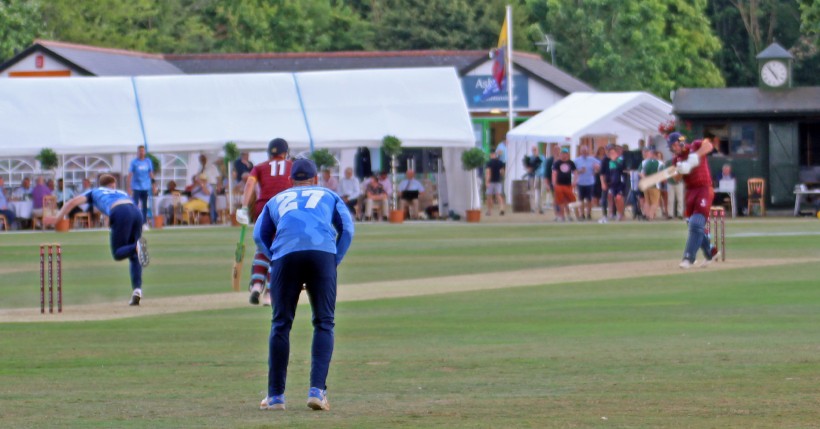 Suffolk hosted Kent Spitfires at Woolpit CC near Bury St Edmunds for a 50-over National County match ahead of the start of the Royal London Cup.

Overcast overheads greeted the sky-blue Spitfires for their National County Match encounter with Suffolk, with rain in the air during the morning.

Alex Blake, who was skippering Kent in place of a rested Joe Denly, put faith in his batters by winning the Toss & electing to bowl second on a deck that looked primed to bat on.

Despite a bright start from Tawanda Muyeye & Ben Compton opening the innings, Muyeye was run out coming through for a quick single from the non-strikers end by Suffolk wicketkeeper Jacob Marston in the fifth over.

At 17/1, in came Ollie Robinson, who had posted on social media the night before his excitement of the return of 50-over cricket.

The pair of Compton & Robinson proved to be perfect foils for each other – with Compton playing his own game of sure defense & putting away the bad deliveries, & Robinson looking to score quickly.

Sidcup-born Robinson raced to his half century in a 31-ball stand that included four sixes, & the partnership was worth 100 runs after 74 balls, 61 of those from the bat of Robinson, after Compton had also reached a half century from 52 deliveries.

Robinson bought up the Spitfires’ 150 with a nicely timed late cut inside 20 overs, with Kent batting at a strike rate more accustomed to T20 cricket.

Easily surpassing his previous 50-over best of 75, Robinson showed no signs of slowing up as he continued to find the boundary rope.

With the partnership nearing 150, the right-hander bought up three figures in only 59 deliveries after targeting Suffolk’s spinners – hitting Josh Cantrell to the off-side boundary to bring up his first century in Kent’s one-day colours, albeit not a List A match.

Anchoring the other end & allowing Robinson the freedom to strike at will, Compton was nearing a century of his own when Robinson was caught at cow corner trying to hit Suffolk skipper Tom Rash for six.

Rash would then find himself on a hat-trick, pinning Blake lbw as he tried to nurdle the ball into the onside first ball, but Darren Stevens would see out the over to see Kent on 237/3.

With Stevens batting in his characteristically aggressive manner, Compton also looked to change gears – & after reaching a century of his own in 98 deliveries by reaching the boundary, he would go on to make 133 from 119 with 17 fours & two sixes before being bowled by Matt Allen.

In came Joey Evison on Kent debut after joining on loan for this season’s Royal London Cup with a permanent deal in place from 2023, & he & Stevens would make 56 together before Stevens was caught in the deep for 34.

Evison made 15 from 12 before being dismissed by Luke Froggatt caught-behind, & after a short rain delay, South Africa’s George Linde took charge with two batting partners in Hamid Qadri (12) & Nathan Gilchrist (22* from 10) to ensure Kent passed the 400-mark.

With a required run rate of 8.64 before their reply even started, Suffolk were right up against it.

But Jack Beaumont & Darren Batch kept the hosts’ heads above water by playing two assured innings at the top of the order – seeing off first spells from the likes of Nathan Gilchrist, Jas Singh, Darren Stevens & Matt Quinn to both make half centuries & see Suffolk to 134/0 after 25 overs.

Despite their stubbornness in the middle, the required rate continued to rise, and it was debutant Evison who made the breakthrough for Kent – Beaumont top-edging to Muyeye at deep point.

Five overs later, Ben Claydon was back in the hutch, rapped on the pads by Evison for five.

Looking to hit out, Ben Parker was squared up by a Matt Quinn short ball for Ollie Robinson to take the catch behind the stumps, & Qadri struck again to see the end of Josh Cantrell for 23. Suffolk were 213/5 inside the final ten overs.

Darren Ironside made a quickfire fifty actively trying to hit big against Kent’s death bowling – his 53 coming from 42 deliveries, but ultimately it wasn’t enough as the Spitfires won by 140 runs.