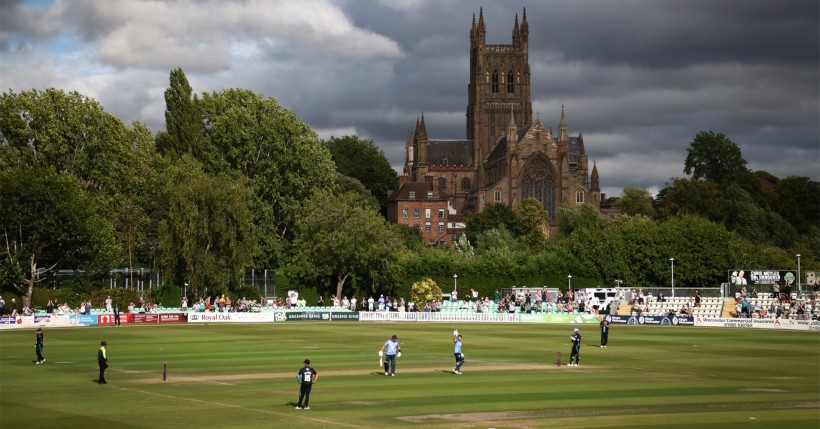 Worcestershire Rapids vs. Kent Spitfires was one of the opening day fixtures of 2022’s Royal London Cup, at New Road, Worcester.

Double century-maker Ollie Robinson hit Kent’s highest individual score in List A cricket as they chased down a 352 target with 5.1 overs to spare in their opening Royal London Cup encounter with Worcestershire at New Road.

He surpassed the previous best Kent performance in 50-over cricket of 150 not out by Joe Denly against Glamorgan at Canterbury four years ago.

A lofted cover drive for four against Josh Baker took Robinson to his double ton from 130 balls and was the cue for a standing ovation all around the ground and he ended on 206 not out.

Former Kent Academy player, Kashif Ali, had scored an impressive 114 on his List A debut for Worcestershire who recovered from 36-4 to post what looked like a formidable total.

But Robinson received superb support from Ben Compton during a stand of 204, Kent’s highest second wicket partnership against any county in this form of the game.

It was a reversal of what happened in last Summer’s corresponding fixture when Worcestershire chased down a 323 target.

Matt Henry, in his only match in the competition before linking up with New Zealand, struck a treble blow as the home side slumped to 36/4 after opting to bat.

Ed Pollock edged the first ball of the innings to second slip, captain Brett D’Oliveira picked out square leg and Jake Libby was taken at short extra cover in an opening spell by Henry of 6-20-3.

With Azhar Ali lbw working to leg off Grant Stewart, Kent were very much in the ascendancy before Kashif and Barnard began their rescue act.

Runs flowed at a rapid rate once Henry had been removed from the attack and it is testament to Kashif’s rapid elevation that he looks completely at home at this level.

He completed a 49-ball half century and then a regal back foot drive square of the wicket off Hamid Qadri took Barnard to that milestone from 56 deliveries.

No-one was able to stem the stream of boundaries and the fifth wicket pair had plundered 175 from 28 overs when Barnard, on 79, fell to a head high catch at mid-off against Matt Quinn.

It surpassed Worcestershire’s previous best fifth wicket List A partnership of 169 by Ben Cox and George Rhodes against Yorkshire at New Road in 2019.

Kashif went onto complete his century with a clip through mid-wicket in the same over and had moved onto 114 from 99 balls when he drilled Hamid Qadri to mid off where Quinn took a fine low catch.

But there was no let-up for Kent with Ben Cox, on his return to action after taking a break for mental health reasons, and Joe Leach adding 74 in just 7.5 overs.

Leach had made 48 off just 28 deliveries when he lofted Quinn to deep mid wicket but Cox went onto a 43 ball half century with two sixes and three fours in a vintage knock.

But then the dominance of bat over ball then resumed after Ollie Robinson and Ben Compton came together.

Robinson was in particularly destructive form against seam or spin and he reached three figures when lofting D’Oliveira for his 13th four in addition to striking three sixes.

The partnership of 204 in 28 overs ended when Compton, on 75, pulled D’Oliveira down Barnard’s throat at deep mid wicket.

Alex Blake was strangled down the leg side off Dillon Pennington but there was no let-up from Robinson.

He reached his double hundred with a lofted off drive against Baker from just 130 balls with six sixes and 26 fours.

Kent double century-maker, Ollie Robinson, said: “At half-way, we thought we were up against it and they probably got 50 more than they should have.

“We knew it was a good pitch and having them 36/4, and then getting 350, is a bit of a paradox. The momentum was with them at half-time.

“But in one-day cricket, you can back yourself to chase anything if you get going especially on a ground like this where the ball races away to the boundary.

“I carried on from against Suffolk (scored 139 on Sunday). I was chatting to Joe (Denly) before the game and said ‘I’m going to get 162 today!’

“I haven’t played much one-day cricket. I just thought I’m going to play with freedom and see where it takes me.

“When you are in one of those ‘everything is going for you’ type of days, you can take a bit of a gamble as well and just play good shots.”

Evison: “I just had a great feeling about the place”