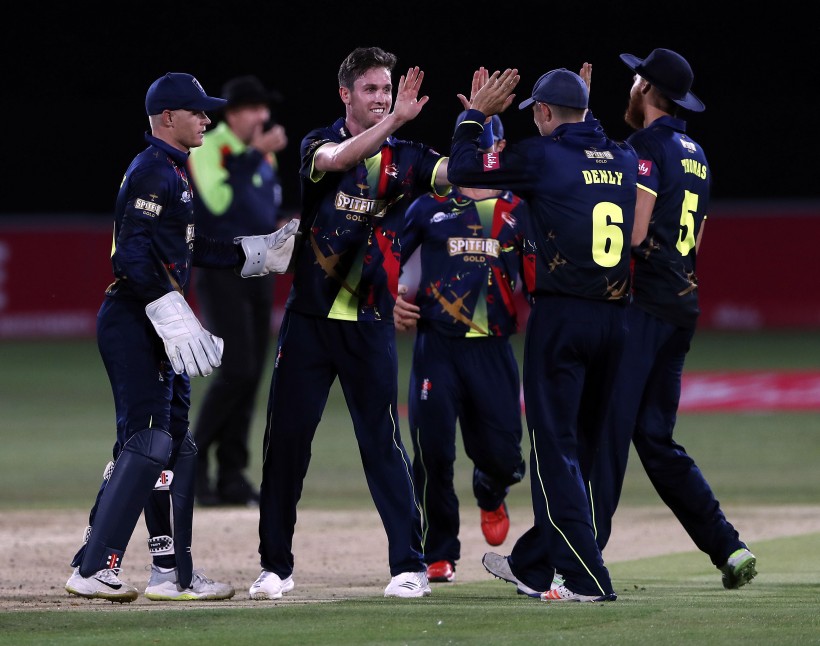 The skipper won the toss and his 35-ball 50 helped the hosts to 191 before Milne’s 4/15 off four superb overs at the Spitfire Ground.

Kent moved to the top of the South Group table and face second-placed Gloucestershire on Sunday in a top-of-the-table clash.

A match-defining 106-run partnership by skipper Sam Billings and new T20 signing Marcus Stoinis set Kent up for victory, and excellent bowling by Denly, Haggett and Milne saw them over the line.

A solitary change for Kent saw Ivan Thomas come in for Mitch Claydon, who was suffering from a back twinge. Spitfires’ skipper Sam Billings won the toss, and his decision to bat first on an excellent batting pitch and in even better conditions was an easy one.

Joe Denly and Daniel Bell-Drummond were tasked with setting up a dominant first innings, but were met by the tricky test of Jamie Porter, fresh from the England fold, and wily Australian Peter Siddle.

Bell-Drummond hit his stride against former Kent man Matt Coles, who was withdrawn from the attack after his first over went for 15. The leg-spin of Australian international Adam Zampa proved harder to face, and Dan Lawrence’s acrobatic fielding on the boundary saw Bell-Drummond dismissed, caught for 19.

Heino Kuhn wasted no time getting settled at the crease. Spitfires reached 51-1 after the six over powerplay, then the South African punished new bowler Ravi Bopara with two consecutive sixes over cow corner in an over that saw 18 runs.

Spin was proving far more effective for the visitors – Simon Harmer claiming Denly (22), caught Paul Walter, in his first over. Zampa, back in the attack, found the edge of Kuhn (26 off 14 balls) looking to sweep and Adam Wheater made no mistake with the gloves.

Spitfires’ last three Vitality Blast fixtures had been disrupted by rain, and even on a glorious summer’s day in Canterbury the elements conspired against Kent, as low sun led to an interruption.

Billings and Stoinis were not to be distracted though, as they patiently set up their partnership, then began to express themselves. The latter was clearly relishing his first proper outing in a Kent shirt, even losing a ball over the Pavilion End! Indeed, the 16th over proved crucial in the course of the match, as Stoinis hit two sixes and was dropped within six balls.

Siddle remained an economical thorn in Kent’s side, but Billings    capitalised against Coles in the 18th, displaying his customary technical flair and flexibility as he reached his half-century from 35 balls (six fours, one six).

It took a last-over run-out to break up the formidable 106-run partnership, Stoinis dismissed for an impressive 47 off 33 balls. Some solid death-bowling from Porter saw Blake and Billings get Kent over the line for 191-4 (Billings 59*, from 39).

Eagles were set a target of 192 to chase under the floodlights. Denly struck with the ball after just two deliveries, finding some good turn and bowling a bemused Wheater for a duck. Denly’s excellent start continued in his second over, as Varun Chopra chipped to Alex Blake at cover. Adam Milne was typically accurate from the Nackington End, and the visitors found themselves just 24-2 after their first four overs.

Walter and Eagles captain Ryan ten Doeschate imposed themselves on the innings to good effect, increasing the run-rate and pressure on Spitfire’s attack. Calum Haggett proved the exception, however, his first over going for just five, and his second beginning with the wicket of ten Doeschate, bowled for 34.

Walter (40) followed his skipper in the next over, Kuhn catching ably off the bowling of Thomas, and the balance of the game tilted back in Kent’s favour.

Haggett claimed his second wicket of the innings in the 14th over, Kuhn showing his prowess in the field once again as he caught Lawrence in the deep for eight.

Denly, too, proved too awkward a customer for the visitors to deal with all innings, and after his second spell he closed with figures of 2-24 from his four overs.

Harmer was ran out for eight after good work in the field by Bell-Drummond, and suddenly Essex were under immense pressure, six wickets down and the required run-rate increasing steadily.

Some uncharacteristically poor fielding let Eagles off the hook in the 16th, and denied Haggett from adding to his tally. Finally a chance was held, and Milne picked up his first wicket in the shape of Bopara, whose quick-fire innings could have otherwise meant for a tight finish. Milne bowled Siddle first ball, and any underlying tension evaporated.

Milne bowled Coles, then dismissed Zampa (caught Dickson) in the last over of the match, to cap an excellent team victory of 28 runs, and personal bowling display. The New Zealander concluded with brilliant figures of 4-15 from four overs.

Next up for Kent in the hunt for qualification is a trip to Hampshire on Friday before a top-of-the-table clash with Gloucestershire, on Sunday.

Stewart shines with bat and ball for Second XI

Second XI miss out on Finals Day on run rate