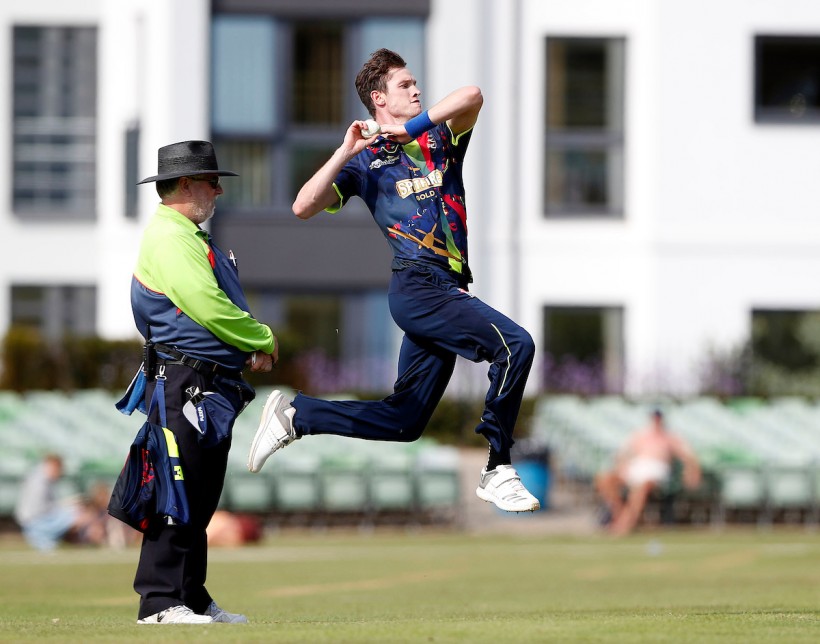 New Zealand paceman Adam Milne marked his return to the Kent Spitfires with two decisive wickets in the penultimate over to seal a dramatic six-run win at The Oval in the Vitality Blast.

The 26-year-old took a club-record 5/11 last summer and followed it with two wickets in two balls in the opening South Group match.

The Black Caps star: “It was incredible. We didn’t bowl well at the start. Ben Foakes was striking it beautifully and it looked like we were going to lose the game until Joe Denly came in and got a hat-trick and completely changed the game.

“We were then able to keep continuously taking wickets around Ben Foakes at one end and then in the penultimate over, I knew we needed dot balls or wickets.

“I managed to sneak one through [Gareth] Batty and then a wide one was nicked through to Sam, who moved beautifully to his right to take a good catch.”

He paid tribute to Joe Denly who achieved a unique double of a century and a hat-trick, the first ever in professional limited overs cricket.

“He continues to blow me away. I think he just world class. As a batsman, he plays some beautiful, proper cricket strokes.

“His bowling is just as good. He hits a good line and length and makes the batsman do something. He changed the game today with bat and ball – hell of a match from him.”

Milne said the team spirit was vital to pulling off an unlikely win against their oldest rivals.

“The vibe in the changing rooms coming from the Championship and one-dayers was really good where the lads have been playing some fantastic cricket.

“They’ve got themselves out of some holes which gives you belief in those sorts of situations and change the game.

“In Twenty20, it only takes a few wickets to change the game and we showed that with our belief and attitude which was amazing.”

Denly: One of my finest days of cricket