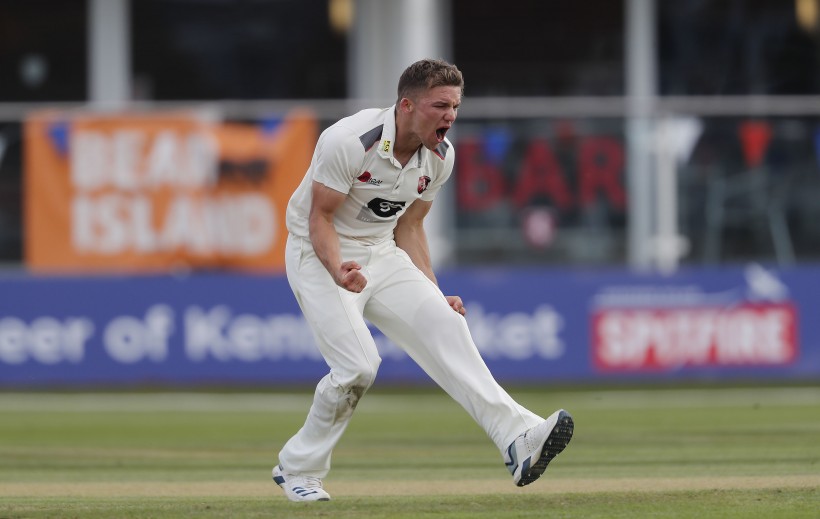 Kent strengthened their grip on the penultimate round Specsavers County Championship clash with Yorkshire after five wickets from Matt Milnes helped bowled out Yorkshire for 269.

Both counties may be out of the title running in Division One, but they are in a three-way battle for third place in the table alongside Hampshire, with Yorkshire currently holding that position.

Kent declared their first innings on 482 for eight immediately before the start of day two before chipping away at the wickets on an excellent batting surface, with the hosts bowled out shortly before close.

With a lead of 213, the visitors opted not to enforce the follow-on and reached close at two without loss from two overs in their second innings.

Matt Milnes ended the day with figures of 5 for 87 from 21 overs, whilst Day One’s double centurion Darren Stevens claimed two wickets along with Harry Podmore.

Milnes and Podmore have now reached 50 wickets apiece in this year’s Championship, and both remain neck-and-neck as to who will finish atop of Kent’s bowling charts at the end of the season.

Early on each day has been the best time to bowl, with Kent 39 for five on day one before recovering, and Yorkshire 36 for three. Matt Fisher top-scored for them with a career best 47 not out.

Stevens did the initial damage to back-up his sensational career best 237.

He struck twice in five balls in the eighth over, getting Adam Lyth caught low down at second slip by Francois du Plessis before trapping Gary Ballance lbw the ball after he had been dropped at third slip by Zak Crawley.

That left Yorkshire at 17 for two before teenage debutant Matty Revis, dropped on nought and eight, edged Milnes’ fourth ball behind in the 18th over for nine.

Lyth and Ballance had also fallen for single-figure scores.

While day one was helter-skelter, day two was hard-fought, with both sides working hard for reward.

Either side of lunch, Tom Kohler-Cadmore and Harry Brook, who made 36 apiece, shared 59 for the fourth wicket before falling inside five early afternoon overs as the hosts fell from 95 for three in the 33rd over to 106 for five after 37.

Both men fell to Milnes, with Brook first to go lbw to one which kept low. Kohler-Cadmore then lost his off stump as he tried to leave alone.

Kent struck again in the 47th over, this time through Stevens’ new ball partner Harry Podmore, who had Jonny Tattersall (27) caught at third slip by Crawley as the score fell to 141 for six.

But batting recovery has been a theme of this fixture, and seventh-wicket Tim Bresnan and Fisher continued the trend either side of tea to take their side to the cusp of 200 and a first batting bonus point.

They calmly chalked up a half-century stand inside the opening 10 minutes of the evening session, only for it to end on 53 when Milnes uprooted Bresnan’s off stump for 39 – 194 for six in the 69th.

Podmore struck again in the first over with the new ball as he bowled Steve Patterson, leaving the score at 220 for eight after 81.

Milnes then claimed his fifth when Duanne Olivier was trapped lbw with Yorkshire six runs short of 250 in the 87th over.

By this time, Fisher had topped his previous career best score of 37, and Ajaz Patel edged a boundary to secure a second batting point.

Patel was bowled for 20 sweeping at Rayner’s off-spin to wrap up the Yorkshire innings.

Kent’s Matt Milnes said: “I think it was quite a good day for us. We stuck to the task pretty well throughout.

“We started very well through Darren Stevens and Harry Podmore. Podders bowled exceptionally well today and didn’t get his rewards. Then Mitch Claydon and Ollie Rayner were economical.

“We maybe got a bit more out of the pitch than they did yesterday, which is promising for the second innings.

“I’m delighted with that (50 wickets for the season). If you’d have offered me that at the start of the season, I would have snapped your hand off. I’ve exceeded all expectations with that. I was aiming for about 30.

“Podders must have got seven chances for wickets today with nicks falling short.

“I said, ‘No chance because you’ll get it with the new ball’. He claims he’ll give me a meal, but I can’t take it off him because I declined his offer.

“We want to bowl last on that pitch. That will give Ollie Rayner the best chance as well because I thought he bowled really well.

“Hopefully he can get some poles in the second innings. It was also a good chance to get the feet up for a little bit.”

Kent to sit down with Stevens after Yorkshire match