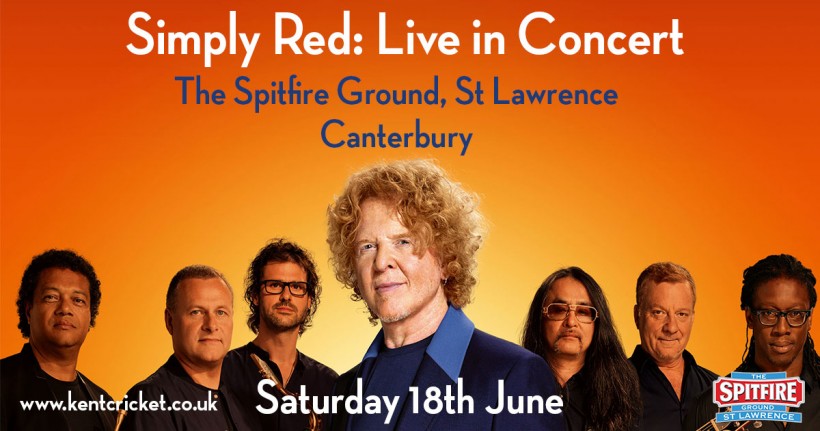 LHG Live, promoters for Simply Red’s Big Love concert in Kent this summer have announced that new General Admission tickets have now been released for the band’s performance at The Spitfire Ground, St Lawrenceon Saturday 18June.

Premier View tickets for the concert, which is part of the iconic band’s 30thAnniversary Big Love tour, went on sale at the end of 2015 and the response from fans has led to the introduction of£32.50 General Admission tickets (plus booking fees).

In line with this new ticket price, all those holding General Admission tickets will be upgraded to a Silver ticket and will now enjoy an enclosed viewing area situated closer to the stage.

Liz Doogan-Hobbs MBE, CEO of concert promoters LHG Livesaid: “We wanted to offer additional tickets to fans as we are seeing such huge demand. The response has been fantastic.

"We are fortunate that the venue has the flexibility to allow us to create a new section immediately behind the existing General Admission ticket holders that will still provide a good view of the stage but offer a new price option and ensure that many more fans can attend the concert.

"It is also a great upgrade opportunity for existing General Admission ticket holders. We are excited to make this announcement to the many fans in Kent.”

Tickets for the concert including Premier View (£60), Silver (£45) and General Admission (£32.50) options are now on sale, plus booking fees.

Simply Red singer-songwriter and frontman Mick Hucknall said: “We are looking forward to performing in Kent and to seeing all of our loyal fans.

The Spitfire Ground is such a revered and historic venue and we are delighted to be able to include it within our tour.”

Having sold over 50 million albums worldwide since the 1980s including number one singles on both sides of the Atlantic, Simply Red are back and more popular than ever before, with their Big Love tour selling out at venues throughout UK and Europe since it began in 2015.

As well as performing classic hits such as Holding Back the Years, If You Don’t Know Me By Now, Money’s Too Tight To Mention, Fairground and Stars, Simply Red will be delighting fans with tracks from the new album, Big Love – their first album since 1995’s Life to feature only original songs.

Fans thought they had seen Simply Red for the last time when the band played what was to be their final concert at the O2 Arena in 2010.

The opportunity to mark 30 years since their iconic debut album Picture Book, was one Hucknall couldn’t resist.

Hucknall said: “Thirty years! It's incredible. What a great thing to celebrate. Once I began wondering how Simply Red were going to sound, I started writing songs and that is how the album ‘Big Love’ came about.”

Tickets for the concert are now on sale, including Silver (£45) and General Admission (£32.50) options, plus booking fees.

Tickets are all standing and hospitality packages from £75 are available from Kent Cricket by calling 01227 456 886, option 0 or e-mail alan.hilliker.kent@ecb.co.uk