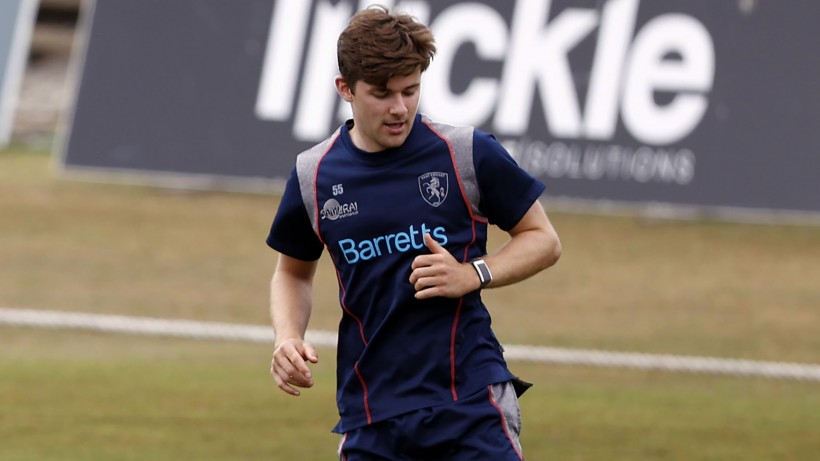 Kent all-rounder Marcus O’Riordan is relishing the prospect of playing his in second full year as part of Kent’s First XI, after strong showings in 2020 and taking on more responsibilities over the Winter.

The 22-year-old was named Kent’s inaugural Emerging Player of the Year at the 2020 Spitfire Kent Cricket Awards, but he’s adamant that there is more to come from everyone in the squad in 2021.

“2020 wasn’t quite a full season, but it was great to play all in all five Bob Willis Trophy matches and I had a bit of success with bat and ball in the competition, too.

“I suppose we all made the most of wasn’t really an ideal first year as a professional cricketer for me personally.”

After scoring his maiden first-class half-century against Hampshire in September, O’Riordan sees himself as a flexible member of the team and he’s happy to be utilised for his skills bat and ball: “I’m definitely aiming to contribute with both.

“You’ll see from my stats in 2020 that my batting was in bits and pieces – I’ve batted at eight, seven, five and even opened a couple of times!

“With bowling, in some games I played it just so happened with the state of the wicket and the way that our seamers were bowling that I didn’t actually get to bowl! It’s definitely kept me on my toes and I quite enjoy it.

“There’s no reason why I wouldn’t want to be batting up the order and bowling lots of overs so that would be the aim for me.”

“Clearly, in this coming season I’d imagine things will be quite different to last year. There’s a higher chance of more overseas players playing at different counties and there’ll also more fixtures in as many formats as 2019.

“We’ll be playing against some different teams this year in the Championship so there’s some exciting challenges ahead for me. I don’t know if you can base things too much on what happened last year as things were so out of the ordinary, but those matches have definitely given me some confidence which can’t hurt.”

Lockdown has also presented its own challenges, and as well as becoming the players’ new representative for the  Professional Cricketers’ Association, Marcus has kept himself busy over the winter before diving into pre-season training.

“You try and get some sort of routine or plan for the day. I’ve never really been that much of a gamer or anything like that. Ironically I’ve started reading a lot more over lockdown compared to when I was actually meant to be studying at school!

“I’ve also been looking ay various online courses – the PCA did a very good programme in November during the period without training, with guest speakers every week, which gave me a few hours of doing something productive.

“I haven’t actually found it too hard to keep myself busy. I’m aware that a lot of people will have struggled just being at home but I’ve found it manageable.”

“I inherited the role of players’ PCA rep from Ivan Thomas just by chance, really. He mentioned it would be up for grabs as he was leaving us and I volunteered to do it.

“It’s something I find quite interesting, seeing how professional game is run not just from a playing prospective and so far I’ve actually quite enjoyed it, with a lot of help from Matt Milnes.”

Kent stars confirmed for The Hundred

Women Capped Players to take part in The Spitfire Sessions