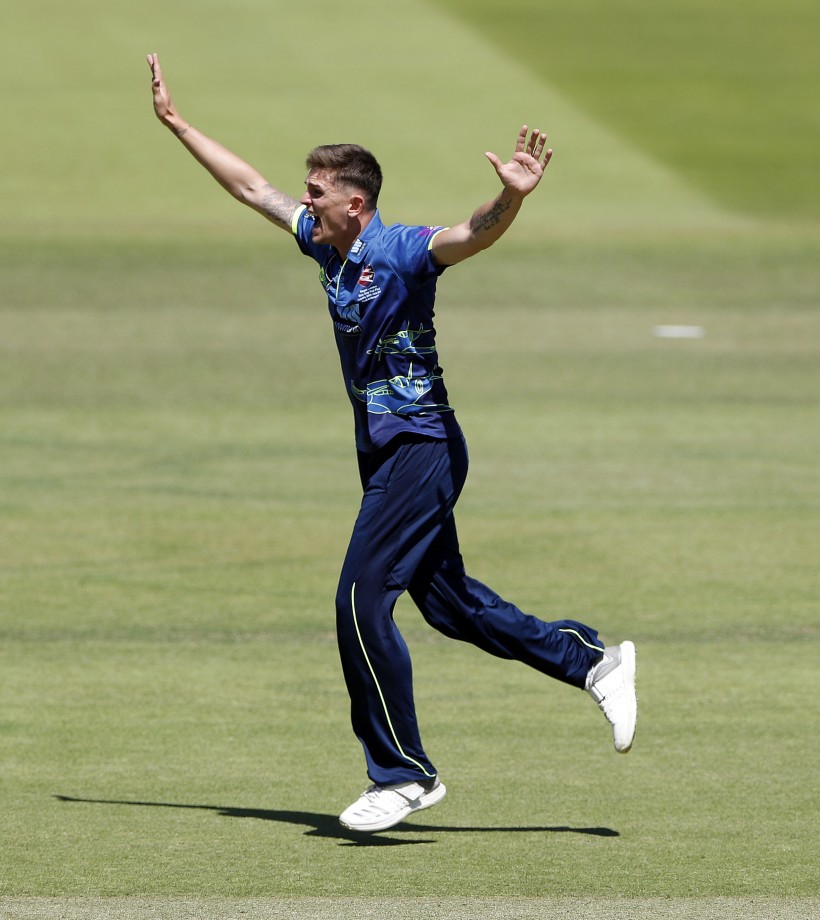 Kent paceman Harry Podmore is looking to establish himself in the side as a genuine all-rounder and has already made a big impact since his move to the county from Middlesex, writes Peter Burrowes.

He has taken 27 Specsavers County Championship wickets this season at an average of 19 including a five wicket haul and a career best bowling performance of 6 for 36 against his former side in Kent’s massive 342-run victory over Middlesex.

His batting has also proved important in Kent’s success this season with a top Championship score of 53 in the lower order, and also hitting the winning runs in the Royal London One-Day Cup semi-final  victory over Worcestershire which propelled the county to their Lords final against Hampshire.

He knows he needs to become more consistent in his batting but was delighted to score his second career century, his first for Kent, in the recent Second X1 four day friendly also against his former club Middlesex at Southgate hitting 111 with sixteen fours and one six reaching his ton off 98 balls.

His aim is to be regarded as a competent all-rounder in the side because of their value to the team.

“It gives the captain more options if he has someone who he can rely on to score runs and take wickets. I think I am on the right track to achieving my goal but I am not there yet. It would obviously be great to score a century in the first team which must be my next aim”.

Harry feels he has boosted his career with his winter move to Kent. “I am loving every minute of it. Everybody has been very friendly and supportive and there is a real family atmosphere about the place.”

Podmore was never a regular in the Middlesex team although he enjoyed his spell at Lords but feels his confidence has been boosted in his new environment helping him to improve his game.

“It is nice to know you have the backing of the coaches and the captain. With a run of games in the team I have been able to show what I can do performance-wise, although there is always room for improvement and learning.”

Harry has benefitted from the advice and encouragement given to him by Kent’s assistant coach Allan Donald, especially on how to approach the game from the mental and mindset side of things.

“Allan was one of the greatest ever fast bowlers and you listen to what he tells you”.

Although he has played in all three formats for Kent this season, Harry prefers championship four day cricket. “It is the ultimate test for players to show their quality” he said,

What did Harry think about scoring a century against his former county, albeit in a Second team match?

“It was bittersweet in some ways as a couple of the players bowling at me are good friends so it was a bit unreal but still special.”

Harry is delighted that he made the move to the Hop county and feels he has settled in well helped by living in Canterbury in a house share with three other Kent players, making him feel very much part of the family.