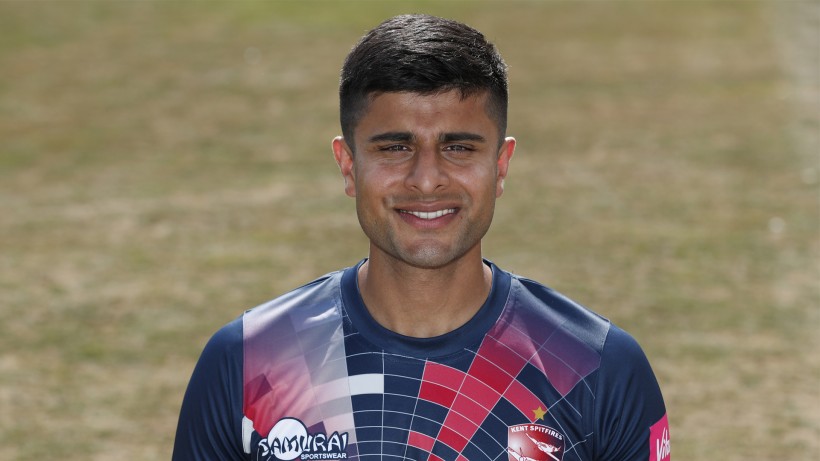 Kent’s left-arm spinner Imran Qayyum bowled the most overs for the Spitfires in 2020’s Vitality Blast, and the 27-year-old is looking forward to carrying on improving going into the 2021 season.

“I think we had quite a young attack last year. Out of all the bowlers, I was potentially the most experienced – Timmy [Groenewald] came in and played a few games but out of the settled starters with the ball I think I was one of the most experienced.

“It’s a good feeling to be given the ball so often and I want to carried that on and perform, leading the attack. That’s the focus and I’m looking forward to doing that.”

New recruit Hamid Qadri and the emergence of Marcus O’Riordan mean that the spin department at Kent has now changed – with Head of Talent Pathway and former Spitfire Min Patel also helping with spin coaching, Qayyum thinks the future is bright with spin options at Kent.

“We had the likes of ‘Treddy’ [James Tredwell] and Adam Riley beforehand and they were very experienced bowlers.

“Hamid and Marcus are still young and learning, much like myself. We’re definitely in a better place for the future because they have years of cricket still to play, and they look like great talents. Hopefully we see some good stuff from them. It’s looking very positive in the spin department.”

The left-arm spinner also has a former slow left armer and T20 World Cup winner in Batting Coach Mike Yardy to aid his development: “In terms of the mentality of left-arm spin bowling he does help with that.

“It’s a different take on things and it’s always good to see things from a different angle. It’s just great to have another voice in the changing room and another person you can go to and talk bowling with when times are tough during matches and you need to find a way through them. As it is in England, spin bowling remains difficult, so the more help you get, the better.”

Qayyum also has aspirations of landing a Wildcard spot in The Hundred if he continues to perform well for Kent in white-ball cricket: “Last year not getting picked up by the Oval Invincibles was tough to take – but I use that as a motivator to do well in T20s and really push for a place in one of the franchises.

“There’ll be a lot of changes with the Kolpak agreement changing and potentially a lack of overseas players coming over so it’s 100% a focus of mine to try and get a contract in The Hundred through my performances. Everybody wants to be part of a new exciting competition and the more Kent players that are playing in it the better it is for us improving.”

January saw the first-team squad return to fitness work in the Indoor School at The Spitfire Ground, St. Lawrence and ‘Immy’ has enjoyed getting into the groove before the season starts.

“We’re all getting fitter and stronger. Everyone’s running faster and longer and looking stronger as well.

“Rob Chave [Kent’s Lead Strength & Conditioning Coach] is also helping me shed a few pounds which is good. I’m trying to get off any excess winter weight from just sitting around!

“It’s good fun and S&C is a massive part of the game; if we can get all this work done now, hopefully come March/April time we can start focusing on our cricket skills and getting ready for our first game at Northants.

And with people struggling to keep busy during lockdown over the Winter period, Qayyum has also used the time to focus on his other passion: watching his beloved Liverpool FC and becoming a force to be reckoned with in the Club’s Fantasy Premier League (FPL) League.

“Football being on 24/7 at the minute is really good! I’m a massive FPL player and I’m top of the table currently in our Kent Cricket League. The plan now is to stay there!

“I love my football and watching all the games is my main hobby currently. I’ve also had a baby so now I’m busy at home all the time – it’s like a second job for me really.

“Spending time with the family during lockdown is a positive instead of being away so taking the positives out of lockdown, it hasn’t been the worst time for me.”