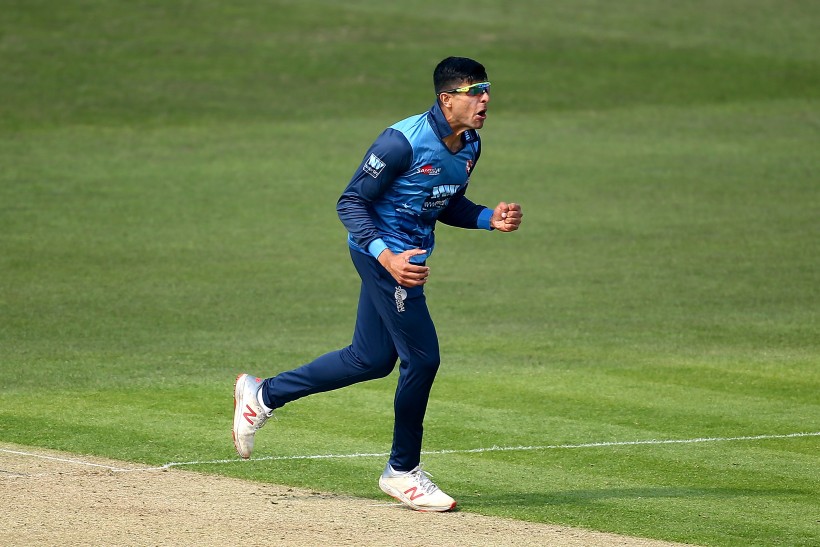 Kent’s Imran Qayyum is still on “cloud nine” following his four for 45 bowling return against Pakistan at The County Ground, Beckenham last week.

The 25-year-old left-arm spinner admitted afterwards that his performance against the tourists was the highlight of his rookie career to date and said that he hopes the four-wicket return will help to progress his game in general.

“Although I was born in Middlesex, I come from Pakistan origin so to even share the pitch with the national side felt really good,” he said.

“Playing against Pakistan felt a bit weird for me at times, but with all my family and friends watching, it was exciting and rewarding.

“Making my first-class debut was a big thing for me personally, I was working toward that for a very long time, but to play against Pakistan and put in that sort of performance was right up there for me.”

Despite the bitterly cold conditions and a blustery wind blowing down the New County Ground in Beckenham, Qayyum mastered the conditions superbly to send down one of the best while-ball stints of his fledgling career.

“Barring pre-season, I reckon those were the hardest conditions I’ve ever had to bowl in, but if anything, that increased my focus because I knew that, with them being international batsmen, I’d be punished if I went slightly off my line or length,” he said.

“You could tell just how difficult it was because Yasir Shah, one of the world’s best spinners, struggled when he had to bowl into the wind.

“The wind did help with my first wicket [Babar Azam] because the ball into him drifted and then gripped off the pitch to turn and hit the stumps. My favourite dismissal was that of Shoaib Malik, it felt great and visually.

“It’s the way I want to get a right-hander out, drift in, spin away, beat the defensive push and hit off stump. I’m a massive fan of Shoaib’s, so to get him out felt really good.”

Qayyum ensured he made the most of the opportunity by also visiting the Pakistan dressing room to pick the brain of fellow slow-bowler, Imad Wasim.

“Imad’s a left-arm spinner like me and a very good one too,” he said.

“He’s a top one-day bowler, so I wanted a chat just to see how he goes about his business. I wanted to gauge how he thinks his way through his white-ball spells and ask about his change-up deliveries.

“I think he has one of the best arm-balls in world cricket, so I was happy to get a few tips off him. He came across as a very nice guy.”

Qayyum admits to some frustration during the season to date, but believes he and Kent have the mettle to push on to greater things.

He added: “I’ve played most of the Royal London Cup games but haven’t lit-up any of them in terms of personal performance. On top of that, as a team, we haven’t put in the type of performance that we’ve wanted to.

“I hate losing, I can’t bare the feeling, so yes, it’s been a difficult start for us. But we aren’t the type of group to drop our heads, we keep moving forward as a group.

“The potential for bad runs like this can happen in sport, especially if you’re playing five games in a couple of weeks with very few training sessions in between.

“The injuries haven’t helped us either, but we’re a young side and this experience will only make us stronger.”