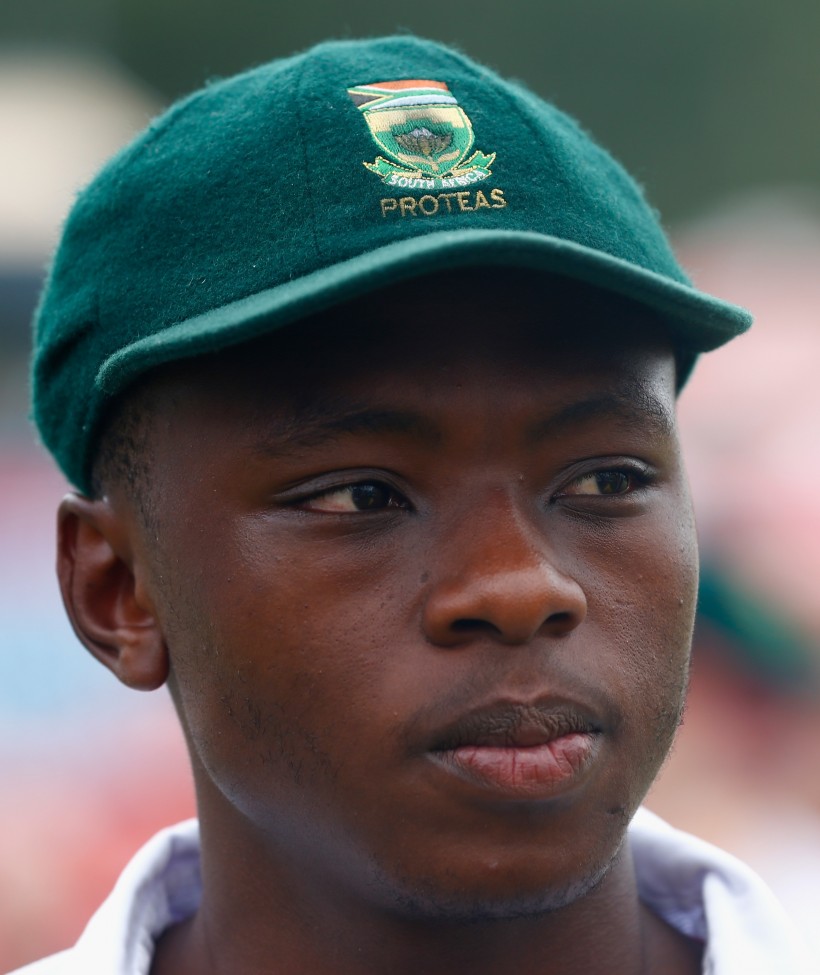 South Africa fast bowler Kagiso Rabada will follow in the footsteps of several of his countrymen this summer, writes Richie Browne.

With the Proteas touring England next year, it is conceivable their first choice pace attack will consist of Rabada, Morne Morkel and Vernon Philander, all of whom have spent time at The Spitfire Ground St Lawrence.

When you add the names of Ryan McLaren, Charl Langeveldt, Fanie de Villiers, Andrew Hall, Justin Kemp, Wayne Parnell and Makhaya Ntini, then it quickly becomes clear that Kent has been well served by the Rainbow nation.

An early representative from Africa’s southernmost country comes from the Hearne family, second only to the Graces in terms of fame in the cricketing dynasties of the Victorian and Edwardian era, were a mixture of Kent and Middlesex men.

Frank Hearne did play for Kent though and well enough to tour South Africa with the MCC in 1888-89.

However blighted by ill-health and sensing an opportunity he opened a sports store in Cape Town and was very soon representing Western Province.

With qualification rules for new territories such as South Africa relaxed, he was soon called up to the South African national side and perversely on his debut for his adopted country two men were debuting for England.

George and Alec Hearne, his two brothers and all Kent players, causing the highly unusual scenario of brother playing brother in international cricket.

The Hearne boys were all born in Ealing, which by the strict laws of the day meant that they should have played for Middlesex, but the fact that their father who played for Middlesex was the groundsmen of Kent’s first headquarters, the Private Banks Sports Ground at Catford, must have helped.

A South African also had a huge part to play in the development of mercurial leg-spinnerDoug Wright, one of Kent’s greatest playerswho took more than 100 Test wickets for England and played for Kent for 25 years until 1957.

Auberry Faulkner was a superb all-rounder for South Africa and one of the first to master the new spangled googly in the years leading up to WWI. After the war he set up a cricket coaching school in Hammersmith having emigrated and it was here amongst others similarly blessed that Wright added the guile to his god given talent.

Wright is on record as saying ‘I owe Auberry Faulkner everything’.

Sadly Faulkner would later kill himself in the changing rooms where a young Wright would change. He is considered to be the founding father of modern cricket coaching.

Left-hander Sid O'Linn played for Kent between 1951 and 1954 before returning with the touring South African side in 1957.

He made 26 appearances as a deputy to the great gloveman Godfrey Evans and also turned for Charlton Athletic FC during his stint in the UK.

He scored more than 16,000 runs in 20 years at the club as well as representing England Under-23s at football.

Roy Pienaar from Johannesburg played with distinction for Kent for three years in the late 1980s as a batting all-rounder, and helping his adopted county to come an agonising second in the 1988 championship under Chris Cowdrey’s captaincy, where they failed to get the title by just one point.

It was during this stint that the blonde South African started his own biltong business, the cured meat that is synonymous with South Africa, which grew and grew until it was sold to a listed company, enabling Pienaar to retire in his forties.

He retired with a persistent knee injury, which couldn’t stand the remorseless grind of a county season and caused him to cancel his contract.

The great stylist Daryl Cullinan played one season for Kent in 2001 and the prolific Martin Van Jaarsveld notched up nearly 13,500 runs in all forms of the game for the county between 2005 and 2011.

Fanie De Villiers must be one of the very few Kent cricketers to ever be asked to judge a Miss World pageant and perfected his off-cutters during his season with Kent in 1990.

South Africans seem to enjoy the garden of England, Vernon Philander put his arrival down to a glowing assessment from Justin Kemp to life at Canterbury.

Bowling all-rounder Wayne Parnellscored his maiden first class fifty on his debut for the county in 2013.

Johannesburg-born batsman Sean Dickson joined Kent last summer after impressing coaches with a string of superb scores in the second XI and has a UK passport thanks to his Kentish mother.

Kent's latest recruit Rabada has all the tools to join the great Proteas fast bowlers.

Specsavers is the new title sponsor of the County Championship