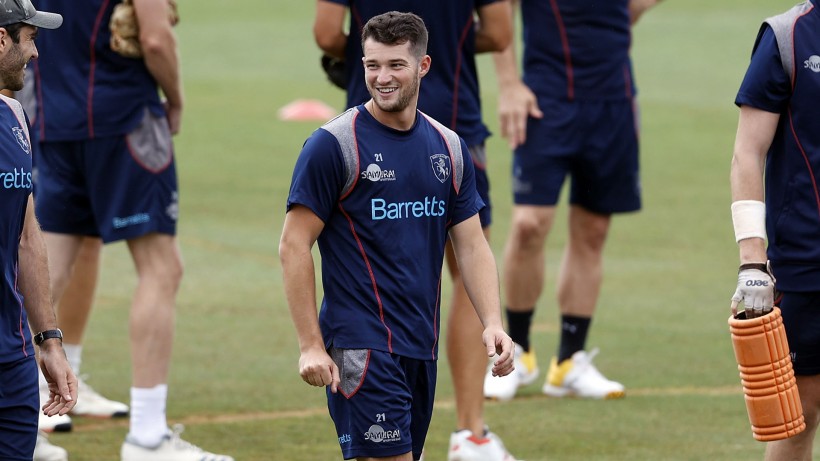 Kent’s Ollie Robinson has spoken about the importance of improving on his batting and wicketkeeping skills ahead of the 2021 season.

The 22-year-old finished top of the catches table in the last County Championship of 2019, and also was at the top end of that measure in 2020’s Bob Willis Trophy.

“I’ve always prided myself on my ‘keeping and really enjoyed doing it. I never used to see it as my sole role, and I was always happy if I got runs, that’s how I used to judge my performances.

“But as I’ve got older, I’ve really understood the importance of ‘keeping, and ‘keeping well. I can live with not scoring many runs and ‘keeping really well now, which I think is nice, to have two personal performance measures.

“Seeing the likes of Ben Foakes in the latest England Test and the reaction people had, raving about how well he’s been ‘keeping, has made that sort of public interest in that skill a real aspiration for me now.”

“But of course, part of a good ‘keeping performance is me and part of it is the bowlers.”

And ‘Robbo’ has to deal with a plethora of bowlers at Kent – with Matt Milnes’ speed, Harry Podmore’s swing and gile, and Darren Stevens’ deceptively difficult bowling, the Sidcup native enjoys the challenge of adapting to each Kent seamers’ styles.

“Sometimes ‘keeping to ‘Stevo’ is a lot harder than it seems. He’s not the quickest, so sometimes you have to stand a lot closer, but he still gets that zip off the pitch that keeps it challenging to ‘keep to. It’s almost like ‘keeping to a spinner.”

With Sam Billings and Jordan Cox also vying for positions with the gloves for Kent over the past couple of years, Robinson thinks the county is in a fantastic place when it comes to glovemen: “It’s great to have healthy competition to bring the best out of yourself – and I think all three of us have the drive to be the best wicketkeeper here.

“That’s not a negative thing at all for me, and it’s healthy to have that competition.”

And with more talented wicketkeepers at England’s disposal, Robinson is staying grounded with his future England aspirations, even after making his England Lions debut a year ago in Australia.

“I believe that I can do it at that high level, and I’m not naïve in thinking that I’ll be there in the next year or so, but if I keep focusing on my game at Kent, I think England recognition will come.

“There’s no point in putting a time frame on things now as that’ll just put undue pressure on myself.”

As well as the Championship, Robinson made a half-century on T20 debut in 2019, and the right-hander definitely sees himself as an all-formats player.

“I’ve worked really hard on my white-ball stuff this Winter and it’s coming on really nicely.

“I’ve got the capability to do it, but it’s just applying that method now and having the opportunity to showcase my skills.

“The Royal London Cup is actually a really good way of doing that. I’m actually really looking forward to that competition as we didn’t have 50-over cricket last year.

“It’s a format that’s played in both professional and recreational cricket, everyone plays it, and I really enjoy it. I feel like I’ve got a good plan in how I go about my game in 50 overs.

“It’s a great format to enhance your white-ball skills in.”

And with a jam-packed season ahead in 2021, he says that the challenges of a very different pre-season due to factors outside of anyone’s control hasn’t really had an adverse affect on preparations.

“It’s been challenging at times with the lack of group interactions – I’m lucky in that I live with Matt Milnes so we have each other to chat to!

“But in training we’re up to small groups now and that’s really good for us to build up that competitive edge again and to have that social interaction in training.

“It’s nice to speak to a bowler and a batsman during practice, and we can now discuss thoughts we’ve had after a Winter away from each other.

“There are other players that are still living on their own and it’s really important that we keep checking up on everyone and making sure they’re OK.”

In the modern age, one way of keeping the players in touch over the Winter has been the players’ WhatsApp group, and Robbo soon lets us know that nobody is safe from a playful ribbing in the chat…

“There’s always a laugh in our group chat and everyone’s got different people they like to have a joke with: ‘Milnesy’ and I like to have a go at ‘Gilly’ [Nathan Gilchrist], but Rob Chave [Lead S&C Coach] has been copping it quite a bit recently with talk about his electric car! It’s all good fun and games and we’re all really close.”

Whilst Rob Chave might be getting some stick in the chat, it seems like our Lead Strength & Conditioning Coach has been enacting some revenge in his pre-season regimes: “The running sessions are *horrible*! You’ve got to be a ‘horrible person’ to be a fitness coach, haven’t you?!

“You’re on your hands and knees for five minutes afterwards – watching some players take it on also makes me feel tired!”

“I’ve enjoyed running (albeit more gently) during the Winter, when I could put a good podcast on and just go for a run. Not these Rob Chave sessions where it’s like he wants to run you into the ground!”

And aside from keeping his fitness up, Ollie has been keeping busy over the Winter.

“I’ve read a lot more in the garden over the lockdowns where we’ve not been playing, and playing video games really.

“Milnesy and I have actually been getting involved with a bit of Fortnite recently as well. He’s actually really good – it’s a bit sad really, but I’m getting there.”

Four Kent stars to take on The Spitfire Sessions