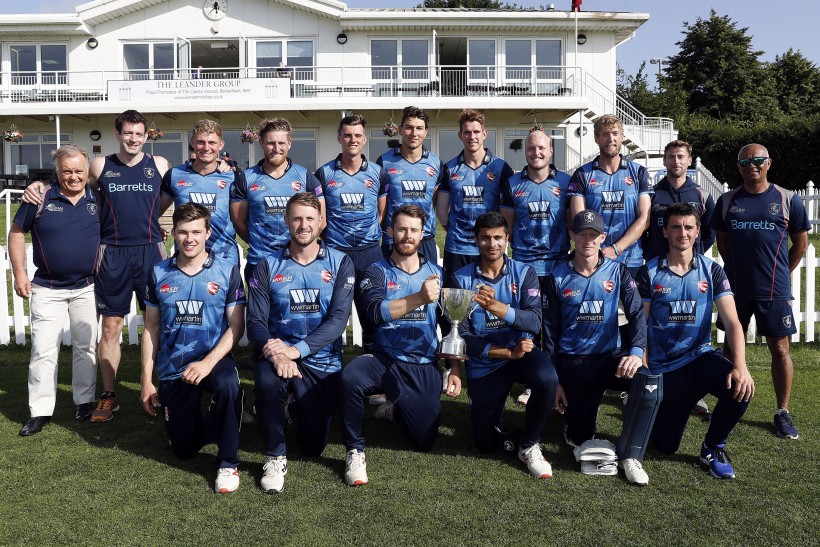 In a season of mixed fortunes, the highlight for Kent Second XI was bringing silverware back to the club for the first time in 17 years as they won the Second XI 50-over Trophy competition, at The County Ground, Beckenham, with a 17-run victory over a strong Durham side.

It was a great all-round team effort, with the centrepiece a thrilling Alex Blake century, following on from his ton in the semi-final against Yorkshire at Scarborough, and a fine bowling performance from then-talented Academy youngster, now first team pro, Marcus O’Riordan.

Part of the focus for the Second XI, as well as trying to win matches, is producing young players through the Kent Academy Pathway system and on to the First Team.

This year proved another success in this aspect, with Jordan Cox and Marcus O’Riordan both signing their respective professional contracts and making their senior debuts for the first team in both red and white ball cricket.

They stepped up to the challenge as they followed in the footsteps of current Kent stars Zak Crawley and Ollie Robinson.

There were some notable individual performances in the Second XI Championship season, Darren Stevens leading the way with his first ever hat-trick in the away victory against Somerset Seconds at Taunton Vale, finishing up with 5 for 11 in eight overs and in the same match. Daniel Bell-Drummond took 4 for 36 and scored 53.

Marcus O’Riordan scored a century in the victory over Middlesex at Radlett, whilst his bowling, along with Imran Qayyum, shattered Sussex at The County Ground, Beckenham. They took wickets between them in a 68 run victory, O’Riordan having match figures of 9 for 157, and Qayyum 5 for 156.

Adam Rouse, who captained the side for most of the season, was a great help to the younger players and had a best score of 91 in the defeat against Hampshire.

Skippering the side was not always an easy task, because the Second XI were rarely able to field a settled team with a number of trialists and Academy youngsters playing in the team throughout the season, and this affected results in the T20 competitionm with the team being knocked out in the preliminary stages.

Second XI coach Min Patel, has been appointed as Head of Talent Pathway, a new role which will further enhance the clubs excellent reputation for producing top young players.

“I want us to have the best and most progressive player development and scouting system possible”, he said on his appointment.