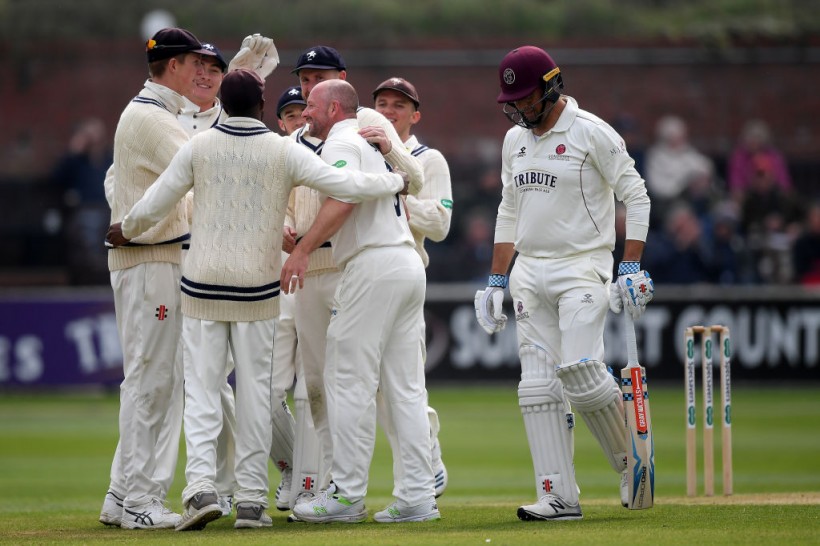 Kent announced themselves in style on the First Division stage, assuming the upper hand in the rain-delayed Specsavers County Championship match against Somerset at Taunton.

Making up for lost time after the entire first day and the first session of the second day was lost to a damp outfield, the visitors bowled out Somerset for 171 in 48 overs, Mitch Claydon returning impressive figures of 5-46 and new recruit Matt Milnes claiming 3-40.

Only Tom Abell offered meaningful resistance, the skipper top-scoring with 49 as the hosts lost their last six wickets for the addition of just 41 runs in 11.5 overs.

Inspired by Sean Dickson’s resilient innings of 41 not out, Kent reached the close on 84 for the loss of Zak Crawley and nightwatchman Harry Podmore, 87 runs behind with eight first innings wickets remaining.

The home side initially warmed wind-chilled spectators, openers Marcus Trescothick and Azhar Ali adding 30 inside nine overs. But their smooth progress was interrupted when veteran left-hander Trescothick, embarking upon his 26th season, played across the line, missed a straight delivery from Podmore and lost his off stump for 10.

Having breezed his way to 24, Pakistani Test batsman Azhar was next to go, pushing tentatively at length ball from Milnes and edging to Dickson at first slip.

Promoted up the order to number three, James Hildreth produced some eye-catching shots off the back foot in raising 27, only to let himself down when an innings of substance beckoned, edging Claydon to Crawley at second slip with the score on 63.

Eddie Byrom played the shot of the day, straight driving Milnes for four, before driving loosely at a wide delivery next ball and falling to Darren Stevens’ tumbling catch in the gully.

Somerset captain Abell played the lead role in a restorative alliance with Steve Davies, these two raising a 50 partnership inside 10 overs. Davies then blotted his copybook, wafting at a ball outside off stump and offering a catch to Milnes at backward point off the bowling of Claydon.

Making his first Championship appearance since June last year, George Bartlett came and went quickly, shuffling in front of a Claydon delivery that cut back into him. Worse followed for the home side when Lewis Gregory played loosely at a length ball from Milnes and was held by Matt Renshaw at second slip for four.

Apparently spooked by events at the other end, the hitherto unflappable Abell uncharacteristically succumbed to a short-pitched delivery from Claydon, top-edging a hook to long leg one run short of his half century as Somerset, rocked by the loss of three wickets in 12 balls, slumped to 145-8.

Claydon completed his five-wicket haul when inducing Josh Davey to nick a leg-side catch behind for seven and Podmore wrapped up the innings, taking a return catch to dismiss Craig Overton for 14.

Despite the glare of the new Cooper Associates Ground floodlights, which were switched on for the first time at 5.30pm, the mood among Somerset members darkened still further as Hildreth dropped Dickson on 10 at first slip off the bowling of Gregory.

Crawley and Dickson demonstrated rather better judgment than those who had gone before them, surviving a probing examination from new ball bowlers Gregory and Jack Brooks in an opening stand that yielded 71 runs and afforded Somerset’s innings grim perspective.

Overton effected a much-needed breakthrough, Crawley edging to second slip for 37, while Podmore clipped Davey to square leg shortly before the close, leaving Dickson and Renshaw to negotiate two overs.

On Day Three, Mitch Claydon took his wicket-tally in the match to eight as Kent closed in on likely victory over Somerset.

By the close of a day of fluctuating fortunes, the home side were 171 for seven in their second innings, leading by only 133. Claydon added three for 30 to his first innings figures of five for 46, well supported by Darren Stevens (two for 34) and fellow seamers Harry Podmore and Matt Milnes.

In a match yet to feature a half-century from any batsman, Steve Davies (39) and Tom Abell (30) gave Somerset a modicum of hope before George Bartlett (35 not out) and Craig Overton (27 not out) counter-attacked with an unbroken stand of 60.

But the home bowlers still look set to face a stiff task tomorrow in a game most expected last season’s First Division runners-up to win.

The day began with Kent 81 for two in their first innings in reply to 171. They found the going tough under overcast skies, which necessitated the use of Somerset’s new floodlights, against a home attack stepping up on their efforts of the previous day.

Josh Davey and Lewis Gregory bowled tight opening spells, Davey having Sean Dickson caught at first slip for 43 and Gregory picking up the prized wicket of former team-mate Matt Renshaw, taken at mid-off from a leading edge for five.

Heino Kuhn made 18 before having his middle stump uprooted by Craig Overton, Alex Blake played on to Gregory attempting to cut and Daniel Bell-Drummond, who battled hard for his 33 was well caught above his head by Marcus Trescothick at second slip to give Gregory a third victim.

It was 172 for seven at lunch and the afternoon session saw the addition of 37 valuable runs before Kent were bowled out for 209, a handy lead of 38.

That looked an even more advantageous position when Somerset’s top order failed again, Trescothick, Azhar Ali and James Hildreth contributing just nine runs between them as veteran Stevens wielded magic with the new ball, claiming two for 13 from seven overs.

It was 32 for four when Eddie Byrom, on 14, edged Milnes to diving wicketkeeper Ollie Robinson and, although Davies and Abell added 58 with reasonable comfort, both departed to forgettable shots.

Abell was caught behind off a flashing drive to give Claydon his first wicket of the innings and the experienced paceman then bowled Davies off an inside edge to leave Somerset 103 for six, a lead of only 65.

When Gregory was bowled pushing forward to Claydon it seemed Kent had broken the back of the Somerset batting. But 21-year-old Bartlett and England all-rounder Overton had other ideas.

They added 60 in entertaining fashion as the post tea session was played in the best weather of the game.

A Pathway To Success