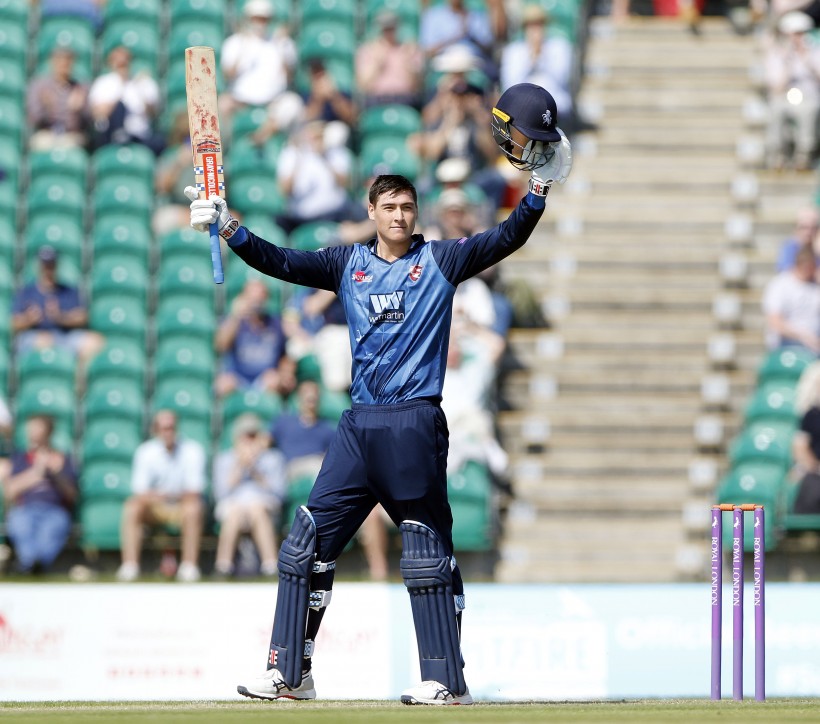 Batting first after acting skipper Adam Rouse won the toss, Kent openers Crawley and Sean Dickson added 60 before leg-spinner Will Beer struck with his second ball, snaring Crawley leg before on the back foot.

No3 Matt Renshaw showed Beer scant regard with a back-foot drive for four and a six that sailed over long-on to hit a spectator flush on the head. As Renshaw changed his bat, so the unfortunate boundary-line supporter was taken to hospital for treatment to his gashed scalp.

In Beer’s next over, Dickson was caught behind cutting, but Renshaw and Ollie Robinson regrouped by taking 17 off a Chris Jordan over as Renshaw cantered through to a 48-ball 50, his first in Kent colours, with five fours and two sixes.

Blake’s innings in his 100th List A game lasted seven balls on his home town-ground before Garton plucked out middle stump with a yorker, then Garton had Adam Rouse caught at mid-wicket off a mistimed pull to finish with three for 42.

With four to his name, Stevens perished after a mid-pitch mix-up saw him run out by Briggs’s direct underarm hit from cover yet Renshaw, despite struggling with back spasms and losing his timing, made it through to his maiden Spitfires hundred from 105 balls with seven fours and four sixes before departing lbw for 109 when aiming a reverse sweep against Briggs.

Milnes was caught in the deep for a lusty 19 and Harry Podmore stumped for a useful 32 as Kent succumbed with two balls of the final over remaining.

In pursuit of 299 for victory, Sharks’ openers Luke Wright and Salt made a good head of steam in adding 44, including 22 in the only three overs of the game sent down by opening bowler Fred Klaassen.

The Dutchman, who had earlier complained of feeling unwell, was replaced by Matt Milnes.

Darren Stevens struck with his first delivery of the 10th over that Wright lofted to mid-off, bringing in Laurie Evans to get off the mark with two rasping cover drives to the ropes. Stevens later went off with a side strain.

Salt straight drove Alex Blake for six to raise the Sussex hundred after 16 overs but Evans went for 46 after holing out to mid-off against Matt Milnes.

Salt posted a 90-ball hundred before Finch fell for an eye-catching 89 from 68 balls with his side only seven runs short of the win line.

Book your tickets now to avoid missing out >>>