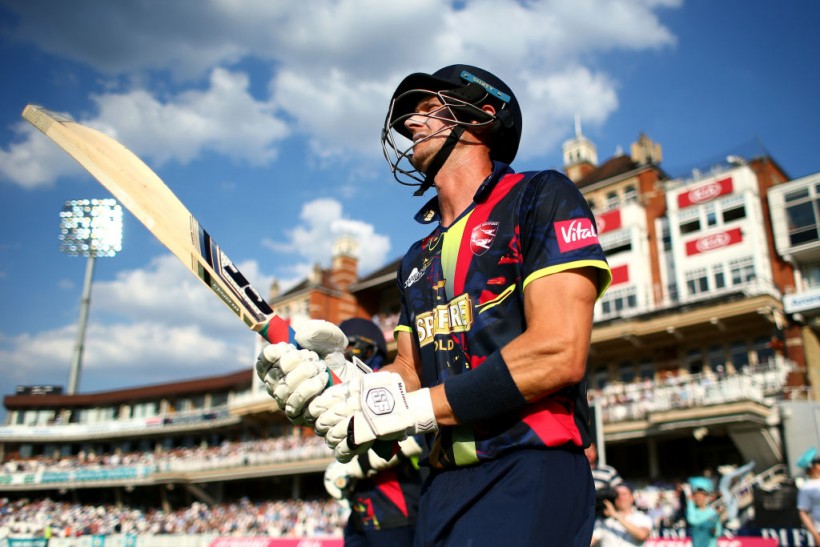 Joe Denly became the first Kent cricketer to claim a hat-trick and score a century in the same T20 match before superb death bowling by Carlos Brathwaite and Adam Milne sealed a superb six-run win against Surrey at The Oval.

The Spitfires opener blasted 102 in an under-par 173 before three wickets in three balls changed a match which the hosts were in complete control.

Adam Milne yorked Gareth Batty and enticed the edge of Jade Dernbach in successive deliveries to seal a dramatic victory after Carlos Brathwaite struck in successive overs of his second spell as Surrey lost nine wickets for 69 runs.

After winning the toss with the Queen Anne Silver Shilling, the Spitfires opted to bat first and scored 48 for the loss of Daniel Bell-Drummond in the powerplay.

Jade Dernbach’s opening two-over burst cost 19 runs but picked up the scalp of the Spitfires opener for a two-ball duck as he drove to Rory Burns at point.

The wicket brought Heino Kuhn to the crease as the pair accelerated to a century stand in 10 overs.

Denly was the chief aggressor, hitting eight boundaries to reach his 28th T20 half-century off 32 balls with a powerful drive between mid-wicket and long-on.

He extended his club record of T20 centuries to four, reaching the landmark off 60 balls with 12 boundaries and two sixes before holing out to Jacks off the bowling of Mat Pillans.

The South African-born paceman claimed 3/22 in a fine four-over spell backed by Dernbach (2/32).

In reply, the Spitfires struck early to remove young opener Will Jacks for 12 before Rory Burns (39) and Ben Foakes (75) put on 85 in 40 balls before an almighty collapse.

Calum Haggett bowled Burns before Imran Qayyum edged to Haggett in the next over before Denly entered the fray.

After bowling the opening over, his final over proved decisive, removing Rikki Clarke, teenager Jamie Smith and Pillans in three balls for the fourth Kent T20 hat-trick.

Next up the Spitfires travel to Somerset on Sunday (8 July) before a match at Bristol against Gloucestershire on Wednesday (11 July).

The first home Vitality Blast match of the season is against Hampshire at The County Ground, Beckenham next Friday (13 July, 5.30pm)

Robinson in England U19 squad

Denly: One of my finest days of cricket