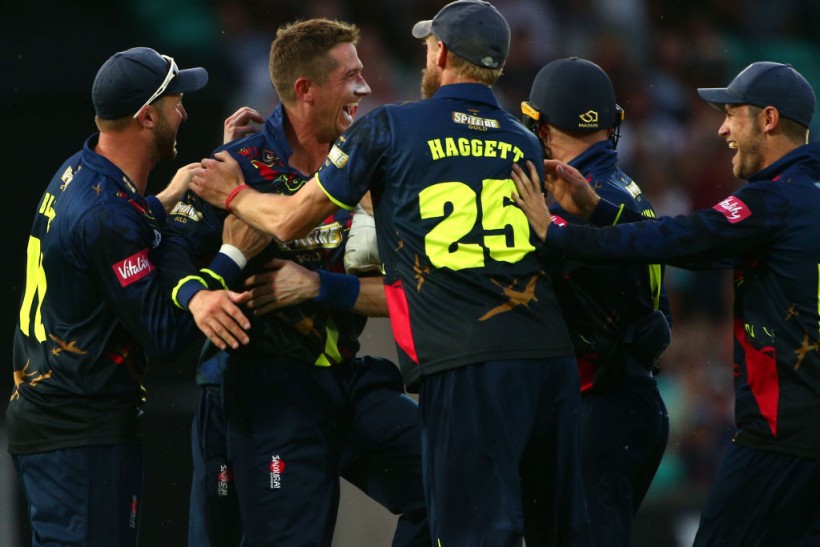 Superb spells from Carlos Brathwaite (2/30) and Mitch Claydon (1/26) restricted the hosts to 184 for seven on a good batting pitch before the Spitfires fell just short.

Book T20 tickets now to save on gate prices >

Heino Kuhn (44) and Sean Dickson (32) found the boundaries at either end of the innings but regular wickets interrupted the chase.

Denly, fresh from signing a long-term contract, made in-roads in the middle overs as he claimed captain Michael Klinger’s scalp, caught at long-on by Alex Blake.

The dangerous Ian Cockbain was clean bowled by the leg-spinner after two big LBW shouts were denied.

Calum Haggett trapped Gareth Roderick LBW in his first over as they slipped to 82-4 at the halfway stage.

Kieran Noema-Barnett (31 off 15) and Ryan Higgins (22 off 19) counter-attacked superbly to give the innings momentum before Carlos Brathwaite removed the pair.

Jack Taylor hit four fours and two sixes in a cameo of 42 off 23 balls that proved the difference between the sides as he punished the Spitfires’ death bowling.

In reply, both openers fell early: Denly was bowled the slow left arm of Graeme van Buuren, who took a comfortable catch on the boundary to remove Bell-Drummond off the bowling of Ryan Higgins.

Heino Kuhn (44 off 34) tried to play the anchor role but lost a succession of partners. Skipper Sam Billings smashed three superb sixes before being bowled by Tom Smith.

Blake blasted a Higgins full toss to Hammond at cover before Brathwaite was castled by Matt Taylor.

Kuhn, looking to accelerate, punched a superb slower ball by Noema-Barnett back to the bowler before Dickson (32) and Haggett (20) added 49 in 28 balls to give the visitors hope.

Milne (17* off 8) hit three late boundaries but was left stranded as Dickson attempted an unlikely second run and Claydon played and missed the final ball, needing six to win.