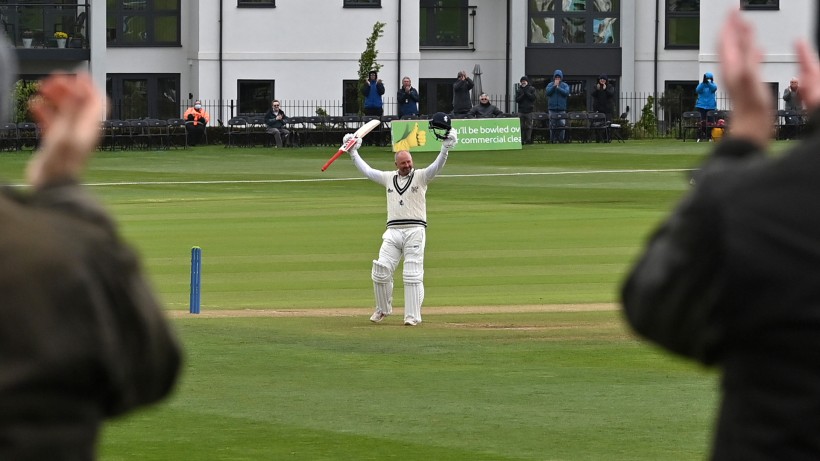 Darren Stevens won the highest accolade at the Spitfire Kent Cricket Awards for the third year in a row as the all-rounder was named Men’s Club Player of the Year as voted for by the Club’s Members and supporters.

Jordan Cox was also the first recipient of the Men’s Young Player of the Year award, given to the most impressive First XI player aged 23 or under.

Members of Kent’s Men’s and Women’s squads came together ‘in-person’ for the first time in two years to celebrate the Club’s on-field achievements at the 2021 edition of the Club’s awards ceremony, proudly sponsored by Shepherd Neame.

In an evening hosted by the ‘Voice of Kent Cricket’, Steve Watts, we celebrated three titles for Kent’s Men’s and Women’s First XIs, as well as the individuals that helped both sides earn more silverware.

Alongside giving out individual awards and rewarding achievements, the FGS Plant Harris Suite showed their appreciation to the players that represented the county in three matches after a COVID-outbreak affected the Men’s First XI squad, and also to Lorne Hart, who passed 300 matches as Men’s First XI Scorer.

Moore, who was a part of the Kent Women squad that won both the Women’s London Championship 50-over competition and Vitality Women’s County T20 South Group in 2021, took 13 wickets in nine appearances at an average of only 20.23, and continued to impress in the field after winning 2020’s Women’s Fielder of the Year accolade.

This season, that award was won by youngster Ryana MacDonald-Gay, fresh from having earned a senior contract with the South East Stars.

The ‘keeper-batter made 66 on her Kent Women debut opening the batting, alongside 16-year-old Megan Sturge.

Women’s Young Player of the Year was awarded to Alexa Stonehouse, currently aged 17, who took a wicket in Kent Women’s ‘Battle of the Bridge’ T20 against Essex at The Spitfire Ground, St Lawrence, and has also signed professional terms with South East Stars.

Both Women’s Moment of the Year and Players’ Player of the Year were awarded to Grace Scrivens, who’s impressive 94 not out in a T20 against Surrey Women being recognised as the stand-out moment from Kent Women in 2021.

Women’s Batter of the Year was revealed to be Alice Davison-Richards, who averaged 59.33 for the Horses this season, including two scores of 50-plus in the Vitality Women’s County T20.

With the ball, England left-arm spinner Kirstie Gordon’s nine wickets in five matches at just 12.33 earned her Women’s Bowler of the Year.

For the men, Moment of the Year went to something 14 years in the making – the moment that Sam Billings and his victorious squad lifted the Vitality Blast trophy at Edgbaston in September.

The second recipient of Kent’s Men’s Emerging Player of the Year Award was right-arm quick Nathan Gilchrist, after the 21-year-old took two five-wicket hauls this season and finished as Kent’s third-highest Championship wicket taker, with 30 at 20.66.

As well as Jordan Cox winning Young Player of the Year, the 20-year-old received Kent’s Men’s Fielder of the Year accolade, after taking 21 outfield catches in 30 matches, including an outstanding individual effort against Birmingham Bears, as well as being a part of one of the best fielding efforts in recent Kent history – a relay catch with Matt Milnes in the 2021 Vitality Blast final.

Another member of that victorious T20 squad, Daniel Bell-Drummond, was named Spitfire One-Day Player of the Season for the second year in a row, averaging 37.84 with the bat and recording six 50-plus scores, as well as six catches, as a Spitfire in the Vitality Blast.

Matt Milnes, who received his county cap at the back-end of the 2021 season, also picked up two awards on the night – being named both Players’ Player of the Year by his peers and Kent’s Men’s Bowler of the Year.

The right-arm seamer took 62 wickets in 29 matches across all formats for Kent this year at 20.30, taking the most wickets for Kent Spitfires in the Vitality Blast, and ending the season with three five-wicket hauls.

Men’s Batter of the Year for 2021 was Jack Leaning, who also earned his Kent Cap this season, after the right-hander scored 1,196 runs for Kent in all formats this year.

His 10 50-plus scores and battling century against Sussex in the LV= Insurance County Championship helped the Bristol-born batter pick up his first individual Kent Cricket Award.

Darren Stevens’ Men’s Club Player of the Year accolade came after another extraordinary year for the all-rounder.

He averaged 31.53 with bat and 24.03 with the ball across all formats this season, scoring three centuries and taking two five-wicket hauls for Kent in a season where he won the Vitality Blast for the second time as a Kent player.