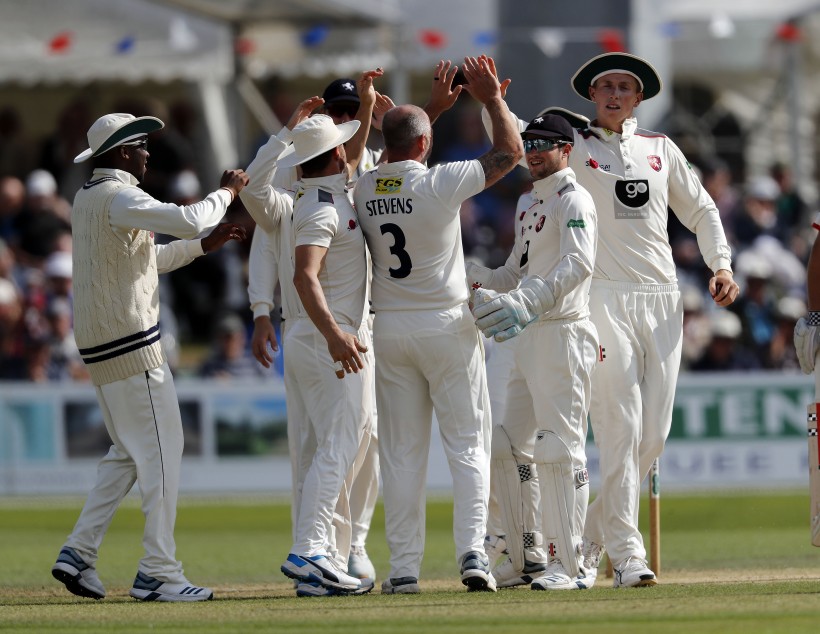 Darren Stevens and Essex’s Simon Harmer have become the first ever players to share the PCA’s Player of the Month award, after a public vote to decide the winner extraordinarily resulted in a tie.

The duo were the clear frontrunners, both finishing with 43% – or 1,013 individual votes – to their names. Kyle Abbott, who produced historic match figures of 17-86 earlier this month, finished third with 10%, and Worcestershire’s T20 hero Moeen Ali came fourth with 4%.

The four-man shortlist had previously been selected via the PCA’s Most Valuable Player Rankings, with the nominees scoring more MVP points than anyone else in September.

Fans who voted via the PCA and Sky Sports websites then had the final say, but there was nothing to choose between two of domestic cricket’s outstanding performers, a fitting end to a dramatic summer.

Stevens has enjoyed something of a rollercoaster year, and was expecting to leave Kent at the end of the season before an incredible late surge in form saw the county perform a u-turn and offer the 43-year-old a contract for 2020.

“The last five weeks has probably been the best period I’ve had in my entire career,” Stevens said.

“I’m really pleased to have earned a new contract. Throughout the year I’ve known that I still have a lot more to give, both on and off the pitch. I just want to win games of cricket for Kent, especially now that we’re in Division One.”

The clear highlight of Stevens’ remarkable month was his unbelievable career best 237 against Yorkshire at Headingley. Stevens rescued his side from 39-5 in a game which they eventually went on to win by a huge margin of 433 runs.

“To get my personal best in the penultimate game was really, really pleasing. I still don’t think it has sunk in – it was a bizarre day.

“With it being a 10.30 start in September, I was shocked to find myself walking out to bat before 11am. We decided to counter attack and luckily it worked in our favour. We had originally been thinking we’d do well to get to 150 or 200 with the start that we had had.”

Stevens was ably supported in his efforts by teammate Sam Billings. After missing much of the season through injury, Billings had a match to remember of his own as he made 138 and 122 not out.

“I’m so pleased for him, he’s worked so hard to get back and it’s all paying off for him. He’s a serious talent and I expect him to achieve big things over the next few years.”

Stevens went on to take 5-20 to win the match for his side in the last innings, and can therefore be forgiven for wanting to put his feet up and rest for a few weeks.

“There’s going to be a lot of golf and a lot of family time. I’m also going to try and do more coaching this winter since I’ve done my level 3 ECB qualification and that’s the route that I eventually want to go down.

“We’ll see what happens next year. It’s going to be a long winter and, to be honest, I’m just happy to still be playing games of cricket for Kent.”