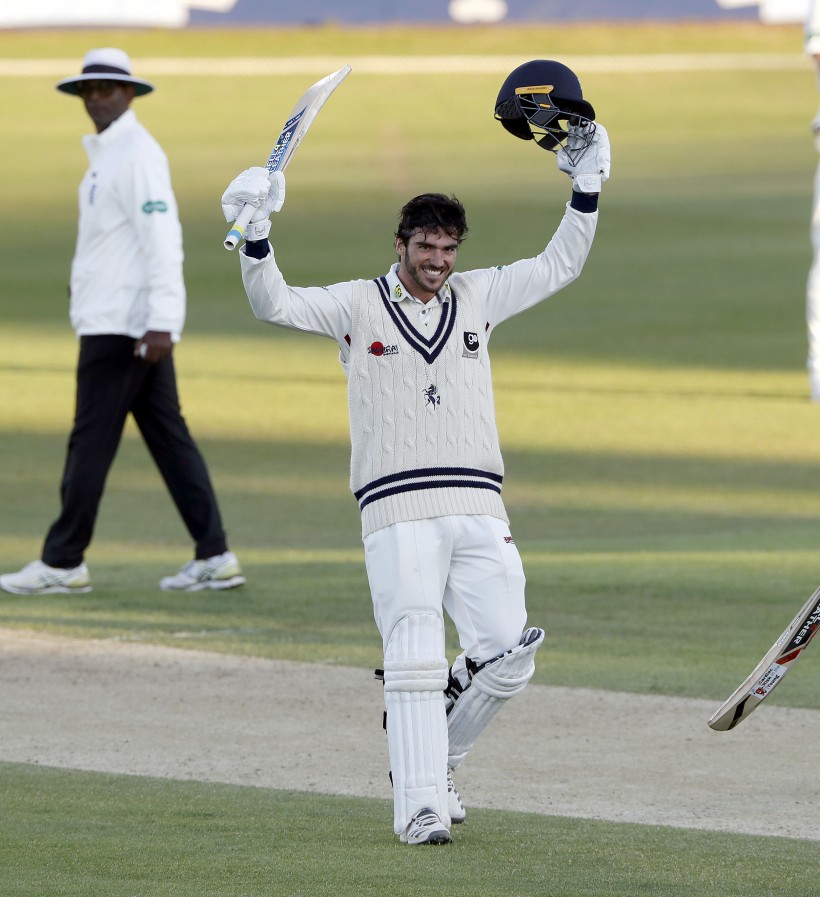 Grant Stewart hit his maiden century for Kent to set Middlesex a target of 467 to win with two wickets down at stumps on day two in the day-nighter at The Spitfire Ground.

He wrapped up the Middlesex first innings to complete a career-best haul of 6/22 before smashing 13 fours and five sixes to register the highest score ever recorded by a Kent number 10 batsman.

Book tickets for day 3 to save on gate prices >

The 24-year-old, who achieved his best batting score of 38 on day one, square cut Ravi Patel for four to reach the landmark, scoring all but one run of a century stand with Ivan Thomas.

Having dismissed Middlesex for 56, their lowest completed Championship innings total since 2006, Kent were batting again by 2.15pm after Sam Billings declined to enforce the follow-on despite banking a 185-run first innings lead.

Heino Kuhn and Sam Billings saw the hosts through to lunch with a lead of 264 and soon after the resumption Kuhn reached a 76-ball 50 – his fourth of the Championship campaign and the first of this match.

Adam Rouse, Kent’s first innings top-scorer with 42, might have gone without scoring but saw Dawid Malan down a tricky chance at second slip off James Fuller.

The Kent keeper reached 20 when he too went LBW, struck below the right knee-roll, by the first ball of a new spell by Cartwright.

Calum Haggett became only the second batsman in the game to fall to spin when he prodded a catch to slip off Ravi Patel, then Harry Podmore exited leg-before when working across the line to Cartwright.

The ninth Kent batsman out was Zak Crawley, stumped by John Simpson as he charged Ravi Patel on 25 before the swashbuckling Stewart extended the lead to 467.

In ten overs before stumps, Harry Podmore removed Max Holden, caught behind by Rouse for a third-ball duck as Middlesex closed on X/X, requiring another 4XX to win.