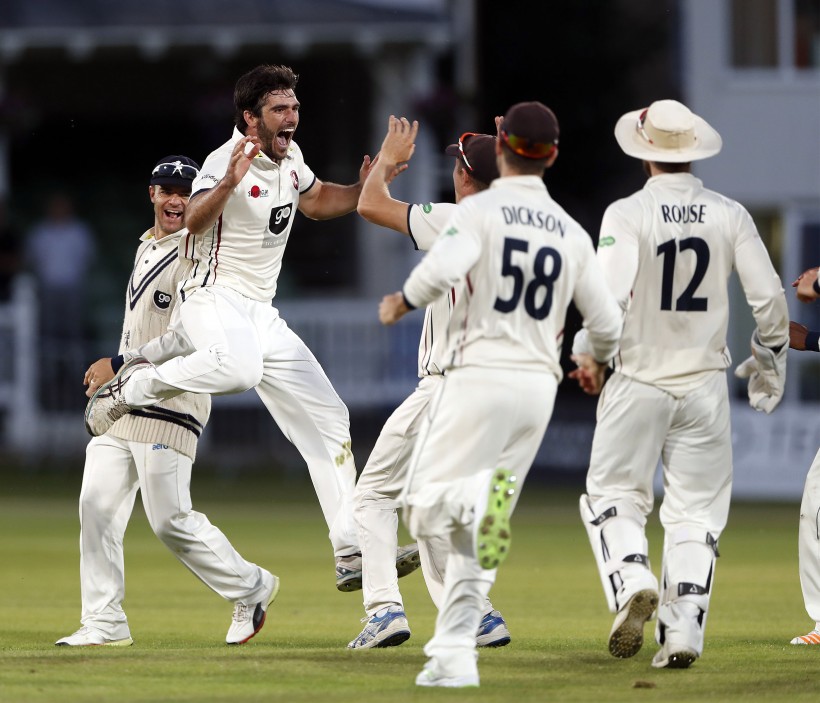 Fit-again Grant Stewart took batting and bowling career-bests as the pink Duke ball got the better of batsmen in the Specsavers County Championship day-nighter at The Spitfire Ground.

The fast bowler took his maiden five-wicket haul for Kent after his swashbuckling 38 helped the hosts to a batting bonus point before reducing the 2016 county champions to 54/9 in reply to the hosts’ 241.

Stewart, returning from a hamstring injury, took 5/21 in nine twilight overs, finding superb control and movement under the floodlights to outfox the Middlesex top order.

Harry Podmore, Ivan Thomas and Calum Haggett each struck once as the Middlesex batsmen struggled to read the swinging new ball.

Returning skipper Sam Billings, playing as a batsman, won the toss and opted to bat first on a firm Canterbury wicket before the Middlesex seamers made early in-roads.

Former Kent loan signing James Harris struck in his first spell, trapping Sean Dickson LBW before Hilton Cartwright had newly-capped Heino Kuhn caught by Max Holden at cover and Daniel Bell-Drummond LBW in his next over.

Billings made a watchful 17 before a carbon copy of the Kuhn dismissal with Cartwright catching at cover off the bowling of Tim Murtagh to make it 99 for four.

Zak Crawley played inside a James Harris away swinger to lose off stump, then acting captain Joe Denly – the club’s leading Championship run-scorer – fenced James Fuller outside off and toe-ended a low catch to Dawid Malan at second slip.

Fuller picked up a second scalp when Calum Haggett prodded at one bowled from around the wicket only to snick off to the tumbling Middlesex keeper John Simpson.

But for a stirring eighth-wicket stand between Adam Rouse (42) and Harry Podmore (32) that added 51 in 10 overs, Kent’s plight would have been even bleaker.

After clubbing seven fours in his 31-ball cameo, Podmore smeared a drive to mid-off against Ravi Patel to be caught by Tom Barber, the twelfth man.

Stewart struck eight boundaries in a career-best 38 before top-edging a return catch to Fuller who took 4/86 after a year out with an elbow injury.

In reply, Podmore and Stewart made the new ball as the sun set on the ground with the latter dismissing Sam Robson with his fifth ball as Dickson pouched a low chance at first slip despite gloveman Rouse diving in front of him.

The Italian-Australian marked his return from injury by taking two more scalps in his third over: Holden played on an in-swinger and England Test batsman Dawid Malan fencing him to Dickson for a third-ball duck.

Stewart improved his career-best again as the aggressive Steven Eskinazi chopped to Billings at third slip for 25 off 27 balls.

Stewart claimed his maiden five-for in first class cricket as he shaped an outswinger into George Scott’s off stump before Ivan Thomas bowled James Harris and Haggett found the outside edge of Simpson and Rouse completed the catch, the 100th of his first class career.

Thomas made it nine down at stumps as he flummoxed Ravi Patel with a yorker as the tailender trudged off for a sixth-ball duck.

Kent all-rounder Grant Stewart was beaming following career-bests with bat and ball. He said: “I’m speechless and don’t know quite how to react, but it feels great to be on the right side of this game after day one. My first over wasn’t the best because I didn’t quite get my lines right, but I soon settled into a rhythm and found some good areas.

“You have to take it as it comes in these sort of games. This is the first pink ball game for me, but I’ve seen blokes like Jimmy Anderson hoop it around with the pink ball, he causes a few troubles, and this was a swing bowlers evening.”

As for his batting cameo, Stewart added: “The ball was still doing a bit toward the back end of our innings and I knuckled down at first. Once Adam Rouse got out I had licence to go for it, I had a bit of a swing and managed to get a couple away. They were useful runs and helped getting a batting point, which might be useful down the line.”