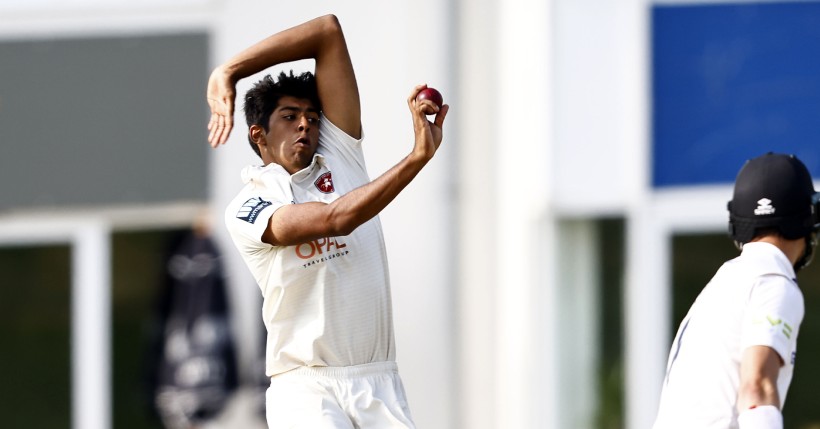 Kent’s talented young fast bowler Jas Singh, who recently signed his first professional contract with the County, is currently in Australia at the famous Darren Lehmann Cricket Academy in Adelaide.

Find out more about the Kent Cricket Supporters Club

The 19-year-old, a product of Kent’s own Academy, was so keen to improve his bowling skills and learn more about the game that he was prepared to self- finance his five month stay ‘Down Under’.

To support his endeavours, Kent Cricket Supporters Club have donated £3000 towards the cost of his stay. He has also been helped financially by his own club, Kent Premier League champions, Bexley, who he has played for since a young age.

Kent Cricket Supporters Club chairman, Terry Hall, said they were delighted to financially assist the player and are looking forward to seeing the results of his playing and being coached in Australia, when he plays for the county next season.

Kent’s coach, Matt Walker, thanked the Supporters Club for their generous donation to Jas and said the county were hugely grateful: “Over the years, the Supporters Club has often stepped forward to assist young players financially when they have gone abroad”.

Walker said last season was an excellent one for their young budding star.

“Jas got better and better as the season went on. He grew up and matured as a bowler along the way. We have a lot of confidence in him to be a real talent in the future”.

Nicknamed ‘Jassy’ by his team-mates, Singh made his LV= Insurance County Championship debut against Sussex in July taking 4 for 51 in the match, and he picked up three more wickets in the final match of the season against Derbyshire.

He is excited about his own future in the game and knows that if he works hard and learns all he can he has a chance of future success.

“We have a talented and experienced squad at Kent, and I can only learn from being with them”, he said.

“I will improve my game and hopefully earn more appearances in the first team squad”.

A product of Wilmington Academy, near Dartford, Singh played a big part in helping his club, Bexley, win the Kent League Premier Division title last season, taking 26 wickets for them.

Being based at the Lehmann Academy along with 24 other players is tough but a worthwhile experience, with training and coaching four days a week, and then playing in selected matches on Wednesdays and Sundays.

Jas has been allocated to play for Northern Districts, whilst his former Bexley teammate Seb Taylor, who he is on the trip with, is playing for Southern Districts.

Singh first played for Bexley’s Colts team in 2013, and made his adult debut for the club two seasons later.

He has played for their first team for the last three years.

Upon Jas signing his rookie contract at Kent, the Club’s Director of Cricket, Paul Downton said: “Jas is a really exciting prospect and has already shown in his performances at Championship level, taking seven wickets in two matches.

“He is the first seam bowler to come through our Talent Pathway for a few years, and it is great we have him joining the squad.”

Chris Cowdrey to be Club President in 2023