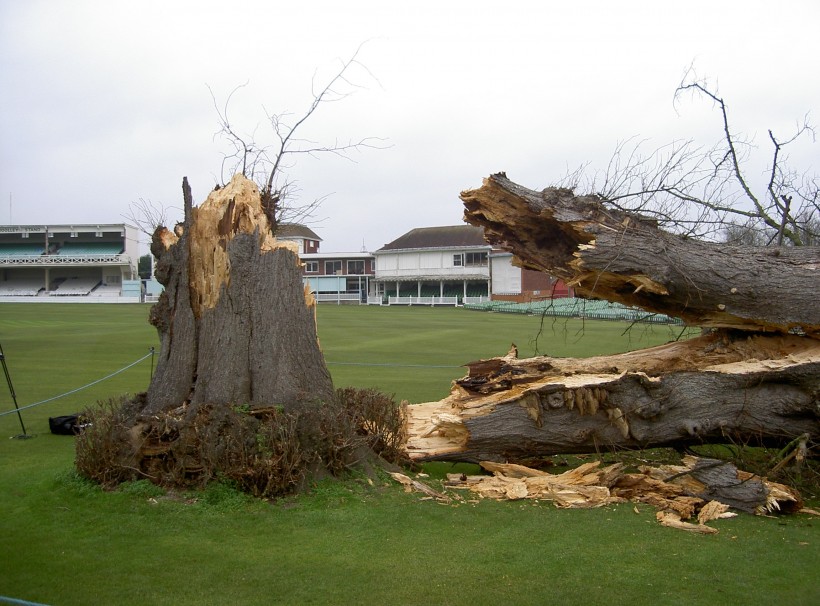 January 9 marks the tenth anniversary of the demise of Kent’s world-famous Lime Tree – and it remains a Legend as one of only two trees on a first-class ground anywhere in the world situated within the playing area.

Its loss, through age and high winds, created interest as far afield as Australia and New Zealand, India, Sri Lanka, South Africa and the West Indies.

As news spread of its demise, the Club was overwhelmed by the interest of television and radio, newspapers and photographers. Many expressions of sympathy as if on the passing of a loved one, were received.

Players and spectators held the Tree in great affection. In his autobiography, Colin Cowdrey wrote:“If I was given a choice as my last act on earth, it would be to walk to the wicket on the lovely St Lawrence Ground in the sunshine, with the pavilion chattering and the small tents buzzing. I would then lean into a half volley just outside off stump, praying that the old timing still lived in the wrists to send it speeding down the slope past cover’s left hand to the old tree for four.”

The Lime Tree stood as part of Kent Cricket from its earliest days until nature took it from us. Kent Cricket legends such as Alfred Mynn, the first groundsmanFuller Pilch(also a great cricketer) would have had a special affection for it, as would Colin Blythe, Frank Woolley, “Tich” Freeman, Colin Cowdrey, Alan Knott and Derek Underwood.

It stood as cricketing history was made by famous players such as W.G. Grace, whose score of 334 in 1876 was the first recorded triple hundred and remains the highest individual score on the ground. And three years earlier it would have witnessed that same bearded figure taking all ten wickets in an innings – the only time that has happened in a first-class match at Canterbury.

But the most frequent talking point about the old tree was, and remains today, the number of times it was cleared and the regulations governing its situation on the field of play. Many are the stories about it: some true, some apocryphal, some claiming to be eye-witness accounts and others that have grown in the telling over the years.

But one thing we can be pretty certain of is that only on very few occasions has a batsman succeeded in clearing the Tree. Every lover of cricket, and especially Kent cricket, will know that any hit that struck a part of the tree, be it low down on its massive trunk, or just brushing the topmost branches, counts as four runs.

So to achieve what might for many batsmen have been the ultimate when batting on this lovely old ground would have required a might blow. Until around 1910, a six was only credited to a batsman if the ball was hit out of the ground so it may well be that the tree was cleared before marked boundaries were introduced.

The first recorded six in Kent’s scorebooks was in 1909 and that was by the great Frank Woolley playing against the Australian tourists. Big hitter that he was, Frank never cleared the Tree.

We know of only three who definitely did. The first recorded was by hard-hitting Sussex batsman Colonel A.C.Watson who, according to cricket writer Gerald Brodribb, hit “right over the famous Lime Tree, some 30 yards over the President’s tent and it ended up out of the ground.”

It was off the bowling of “Tich” Freeman and was the second match of Canterbury Week in 1925. The story goes that, on coming down the ball hit a catering van before apparently landing in bushes on the edge of the ground where it was found the following winter with chippings of china embedded in it.

Gerald Brodribb also records the second occasion when the legendary Learie Constantine of the West Indies cleared the Tree in the 1928 Tourists’ match, which the visitors won by 210 runs, a victory described by Wisden as their best performance of the whole tour.

Constantine’s innings was brief: just 30 runs that included four fours and two sixes, the second of which cleared the Tree. Broadribb relies on a report in The Times: “Constantine made one tremendously high on-drive which cleared the top of the Tree just in front of The Buffs enclosure, probably the biggest hit ever seen on the Ground”.

Another West Indian, in more recent times, was the last player to achieve the feat.In his debut match as Kent’s overseas player Carl Hooper, the popular Guyanese all-rounder cleared the tree during his undefeated second innings 115 against Durham.

He hit five sixes in his innings during which he completed his century off just 82 balls. That was the last occasion on which the ball soared above the Tree’s topmost branches.

There are two further occasions on which there is evidence that it might have been cleared. Turning again to Gerald Brodribb, in the August 1962 issue of The Cricketer magazine, he wrote an article “Big Hits at Canterbury”.

He claimed that runs recorded as fours before the days of sixes could well have cleared the Tree especially so in the innings of Robert Relf, playing for Sussex against Kent in 1907. He writes:“…in scoring his first century, a score of 210, made several huge drives over the (Lime) Tree off E.W. Dillon’s bowling.” An examination of the Kent scorebook for that match records that Relf hit 33 fours.

The second of these is rather more doubtful but is worthy of further investigation. Brodribb again dangles the carrot. It was the second Canterbury Week match in the month before the outbreak of World War 2 when Middlesex were the visitors. It was big Jim Smith, noted hitter, specialist in scoring sixes, weighing over 17 stone and described as “the very personification of village blacksmithery.”

Batting at number ten, his one and only first-class hundred included what has been described as seven enormous sixes, at that time a record number for a single innings on the ground.

It was claimed that the second of these cleared the Tree but match reports neither confirm or deny this. Brodribb’s account of this innings in his book Hit for Six describes each of those seven hits but makes no reference to any of them clearing the Tree.

But the story has persisted, no doubt encouraged by Middlesex bowler Ian Peebles, who played in the match and subsequently wrote in his book Spinners Yarn that Smith achieved “a hit over the Trees at Square Leg”.

In 1998 the Club received a report from experts who had diagnosed tree fungus. They suggested a maximum life expectancy of ten years.

Over the years the Tree became a Memorial for past members and supporters and there was a feeling that the tradition should be maintained. So with the blessing of the cricket authorities and Canterbury City Council and in anticipation of its demise, a replacement was planted and moved close to the site of the original. Although now thriving, it will be many years before it attains the height and stature of its predecessor.

At a ceremony attended by a large gathering in March 2005, the new tree was moved to its permanent place. As a mark of respect, the ceremony included a Blessing by the late Supporters’ Club President, the Rev. Canon Chris Byers. Words written by cricket broadcaster and writer Irving Rosenwater, were read by Christopher Cowdrey:

Not merely just for Kentish men,

Nor just for Men of Kent,

For all who saw its noble boughs,

Knew proudly what they meant.

Not just a tree,

Not just a lime,

But Kent’s own icon

Adorned the Ground with majesty

As this mighty icon grew.

Then Harris (Lord) and Ivo Bligh,

And Woolley, Blythe and Ames,

An immortality of names.

The regal lime, it saw them all

At third man or at deep long on:

Nature now has made her claim,

So the Legend lives on. It is fitting that in recent years, it has temporarily become linked with the Supporters’ Club moving wreath-laying ceremony during Canterbury Week that marks the Club’s memory to those Kent cricketers who fell in the two World Wars.

Copies of A Legend Dies, The Story of a Tree with a Cricketing History by David Robertson are available from the Kent Cricket Shop at £10.50. A limited edition of 200leather-bound copiessigned by Derek Underwood and David Robertsonare also availableat £40.