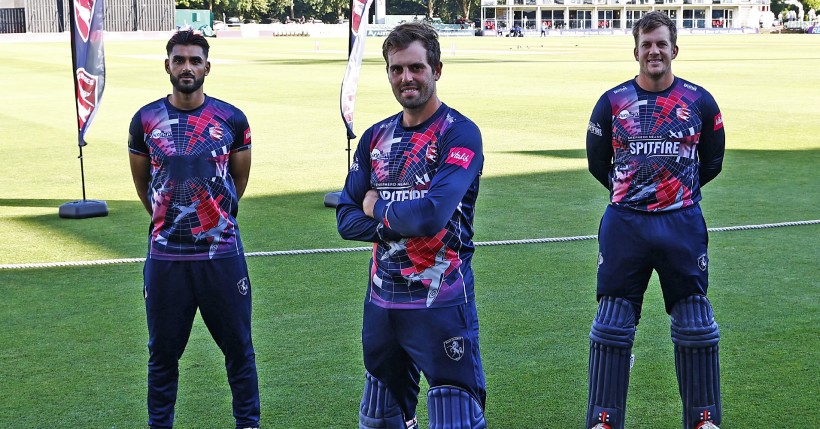 Of all the stories and narratives of Kent’s Vitality Blast victory in 2021, perhaps the most unique, and memorable, is Kent’s trip to North London to face Middlesex during the South Group stage.

But before the Spitfires were due to travel to Lord’s on Friday 16 July, a derby match with one of Kent’s biggest rivals was the first of three T20 matches that the Spitfires had to gain two wins from to win the South Group.

Going into the Spitfires’ ‘Oldest Rivalry’ clash with Surrey at the Kia Oval on 9 July, Kent needed one victory to secure a Quarter Final berth, with two wins needed to secure that lucrative home knockout tie:

A match that had everything from a Kent perspective. A bowling performance that offered nothing to Surrey’s batters, two outrageous catches, and a measured, professional run chase that sealed victory with over four overs left to be played.

Kent Spitfires restricted Surrey to just 128 for 7 before strolling to a nine-wicket victory at the Kia Oval and qualifying for the Vitality Blast Quarter Finals.

Daniel Bell-Drummond went on to a 37-ball 53 not out after he and Joe Denly (31) put on 64 in eight overs for the first wicket, to set up a comfortable chase that ended with 4.3 overs to spare.

Surrey, put in, were in trouble even before the end of the six-over powerplay, in which they failed to hit a single boundary while staggering to 17 for 3.

Tim David clubbed Darren Stevens for a big six before being brilliantly held by a diving Jordan Cox at long on for 20 from the next ball. Stevens found himself on a hat-trick when Burns (19) was then magnificently caught left-handed by Klaassen, flinging himself to intercept a sliced cut at short third man.

Adam Milne, the New Zealand fast bowler, was outstanding both with the new ball and in the final overs to take 2 for 13.

Kent’s next match is set to begin the next day, on Sunday 11 July, with the visit of Sussex to open the 169th Canterbury Cricket Week.

The Club’s Professional & Cricket Operations department work through the night to bring together a squad entirely different in make-up from the side that travelled to South London.

In collaboration with Public Health England and the England & Wales Cricket Board, the player impacted will now observe a period of self-isolation, beginning from 10 July, following UK Government’s protocol on quarantining.

The remaining members of Kent Spitfires’ Vitality Blast squad that played on Friday night at the Kia Oval have been deemed close contacts and are therefore also required to self-isolate for ten days.

The Club can confirm that a full squad will be named for today’s LV= Insurance County Championship match against Sussex and the two forthcoming Vitality Blast matches against Middlesex and Sussex Sharks.

Heino Kuhn will take on captaincy duties and the full squad for today’s match will be announced shortly.

Incoming squad members, made up of Kent Second XI players and homegrown prospects, will follow usual testing protocols to ensure safe entry into the Championship squad, and will have the opportunity to impress in competitive first-class cricket.

A new-look Kent side, including six debutants, takes to the field in first-class cricket.

On first-class debut, teenager Jas Singh finishes the day with bowling figures of 4-51.

The Club can confirm that Nathan Gilchrist has been contacted by NHS Test & Trace and advised to observe a period of self-isolation.

He has tested negative for COVID-19 with a lateral flow test and is symptom-free, but will now to isolate for ten days in-line with NHS Guidelines.

The Club’s current COVID situation means that the fixture will now not be able to be fulfilled, and Kent Cricket would like to thank the players, staff and Members of Suffolk County Cricket Club for their understanding.

The Club confirms that Zak Crawley will be available for Kent Spitfires’ huge trip to Middlesex that coming Friday, but Club Captain Sam Billings will be unavailable after a COVID outbreak inside the England international bubble.

Sussex’s Jack Carson took three for 87 and Sean Hunt two for 48, but despite a cluster of wickets in the final hour, the visitors were unable to polish off Kent’s tail.

Hastings-born Harry Finch made 115 from 212 balls against his home county as Kent closed on 257 for seven, after Sussex had declared on 332 for four, 40 minutes into the morning session.

All Kent supporters owe a debt of gratitude to these men for turning out for the Club and saving not only our cricketing faces but also Canterbury Week as well.

The Club previews the following day’s clash at Lord’s, but does not name a travelling squad, stating that it will be announced ‘in due course’.

The trio of Scotland international players will be available for the trip to Lord’s to face Middlesex on Friday (16 July) and for the visit of Sussex Sharks to The Spitfire Ground, St Lawrence this coming Sunday (18 July).

We’ve been keeping a bit of a secret. @GeorgeMunsey, @calummacleod640 and @Safyaan50 have all signed for Kent for the final two matches of the @VitalityBlast South Group. Can’t wait to see them in action for the Spitfires this week #FollowScotland 🏴󠁧󠁢󠁳󠁣󠁴󠁿 ✈️ https://t.co/Zr3FZzcpHZ

What comes next will live long in the memory of the Kent Spitfires aficionado.

With the three Scotland internationals in their side, Kent produce their most effective T20 bowling performance in the Club’s history – dismissing the hosts at Lord’s for just 80 runs, Middlesex’s lowest ever T20 total, in 16.3 overs.

Elliot Hooper, who had been 12th Man against Sussex in the days previously, enjoyed a dream debut as a Kent player.

The 25-year-old left-armer took 3-24 in the 77-run victory – the hosts failing to reach their previous worst tally of 92 made against Surrey at Lord’s eight years ago.

Fellow Spitfires T20 debutants Matt Quinn, Safyaan Sharif and Marcus O’Riordan were also among the wickets, all this after Harry Finch top scored with 47 and Heino Kuhn made 42 in Kent’s total of 157-8, Blake Cullen taking 4-33.

Another of the Kent new boys, George Munsey, swept the second ball of the match from Mujeeb Ur Rahman for six but departed later in the first over.

Kuhn was then dropped at point by Joe Cracknell from Tom Helm’s first ball and he and skipper Zak Crawley set about the host’s attack.

Crawley hit three sixes as 50 came up in the sixth over, but attempting a fourth he was brilliantly caught by Max Holden at deep square – the first of Cullen’s four victims.

Kuhn and Harry Finch continued the onslaught helped by a succession of mis-fields, adding 65 in 43 balls, meaning the visitors were sitting pretty at 118-2 early in the 13th over.

However, Kuhn holing out in the deep off the excellent Sowter sparked a turning point as runs dried up and wickets tumbled.

Finch tried to hold things together making hitting six fours, in his 35-ball stay but just 40 runs came from the last eight overs.

Chasing 158 to win, the hosts simply fell to pieces.

Sam Robson was yorked by Quinn and when the dangerous Joe Cracknell pulled Podmore straight into the hands of deep square they were 16/2.

And it was 20/3 when New Zealand international Daryl Mitchell was trapped LBW by Sharif, who returned two for 10.

Holden was caught on the fence to give O’Riordan his first Blast wicket and the procession continued as Hooper scattered Sowter’s stumps.

Helm, Hooper’s other victim, and Mujeeb were the only players other than Chopra to reach double figures as the hosts were bowled out with 21 balls to spare.

The Club’s official Twitter account changes its name to Kent McSpitfires in tribute to the entire team that put in a fantastic performance for the Club – a home Quarter Final in the Vitality Blast is clinched.

The ‘McSpitfires’ are given a warm reception from the Club’s Members and supporters before their final match together as a group, with Kent’s Men’s First XI squad due to be released from their quarantining period after this match.

The group line-up together for a photo before the match in front of the Underwood & Knott Stand, and are applauded by the Club’s members before they take to the field.

Coming up against a Sussex Sharks side that needed a victory to secure their own Quarter Final berth, Kent, who had secured the South Group ‘title’ two days before, came up short against a Sharks team that included the likes of Phil Salt, Tymal Mills, Jofra Archer & Rashid Khan.

The county had used 25 players over the course of the tournament, every single one contributing to bringing success back to The Spitfire Ground, St Lawrence. 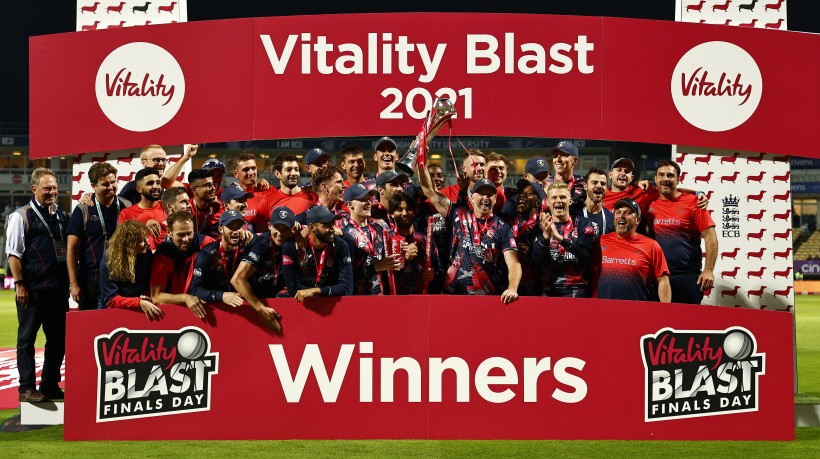 Klaassen extends until the end of the 2024 season