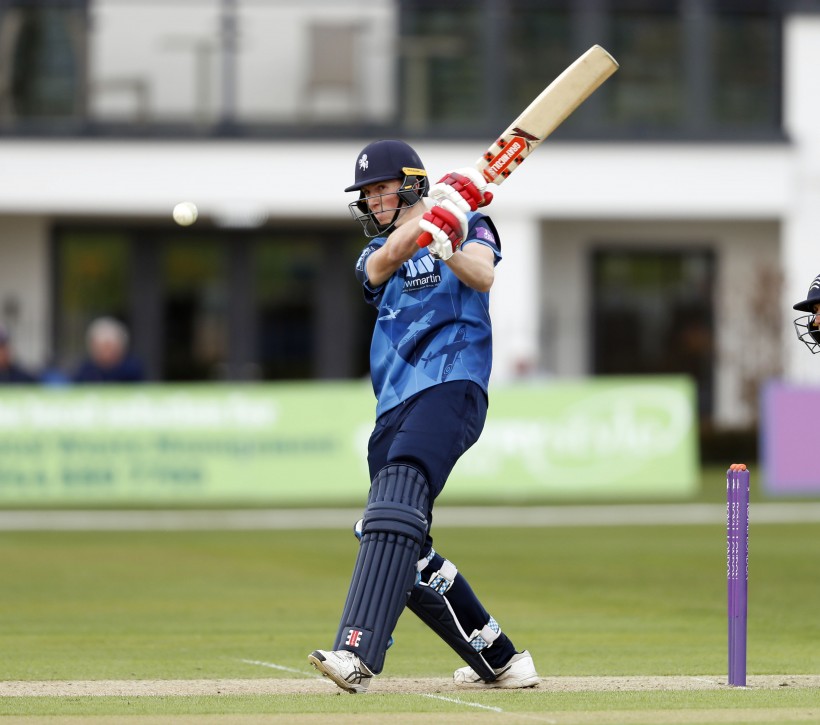 A first career List A century for Zak Crawley wasn’t enough as the Kent Spitfires lost their final Royal London One-Day Cup South Group game against Middlesex by 33-runs in a 727-run thriller at The Spitfire Ground, St. Lawrence.

Batting first, Middlesex posted a mammoth 380 for five – their highest ever one-day total against Kent and a List A record for the county, beating the club’s previous best of 367 for six against Sussex at Hove in 2015.

Despite Zak Crawley’s classy, career-best 120, Middlesex dismissed the hosts to 347 to complete their sixth win of the campaign with seven balls to spare.

Having won the toss, the visitors lost opener Sam Robson to the eighth ball of the innings when he picked out second slip after attempting to cut.

Left-handed, second-wicket partners Holden and Nick Gubbins came together to feast on wayward Kentish bowling. But Gubbins, when only three shy of a half-century, danced down the pitch to pick out long-on.

Holden and Ross Taylor, the Kiwi Test legend, took it all in their stride to post a century partnership inside 18 overs while Kent’s Ollie Robinson replaced Adam Rouse behind the stumps after the starting keeper picked up a hand injury.

The Middlesex run-fest continued with Taylor’s 62-ball 50 and Holden’s maiden List A century off 102 deliveries and with nine fours.

Performing against his former county, Kent’s Harry Podmore struck in his final over to end a stand worth 191 by having Taylor caught on the deep square-leg boundary for 94 from 85 balls, but the bowler’s 10 overs had cost 88 runs.

Stevie Eskinazi perished in similar fashion by holing out to long-on then Holden went, run out at the non-striker’s end when attempting to steal a bye to Robinson. His was the second highest one-day score against Kent and the best in limited overs cricket by any Middlesex batsman, beating 163 by Andrew Strauss against Surrey at the Oval in 2008.

Kent’s implausible pursuit of 381 at an asking rate of 7.62 an over started badly when a swishing Daniel Bell-Drummond toe-ended a short one to the keeper.

The hosts rebuilt through an attractive second-wicket stand worth 93 between Crawley and Matt Renshaw (49) that ended when Renshaw’s reverse paddle was caught at backward point.

Crawley moved fluently to a 58-ball 50 but Kent’s required run rate crept beyond nine an over and, with only 20 overs remaining, Spitfires still needed 180.

Interim captain Heino Kuhn contributed 36 to a stand of 87 before his sliced drive sailed to backward point then Rouse heaved to cow corner to gift his wicket to James Harris, who finished with four for 65.

Crawley posted his maiden List A century from 103 balls with 13 fours moments and quickly moved past 107, Colin Cowdrey’s List A record for Kent matches against Middlesex scored at Lord’s in 1972.

With 110 required off the final 10 overs Crawley perished, bowled when cutting at a Nathan Sowter arm ball – and Kent’s chances went with him. Mulder signs up for Championship stint