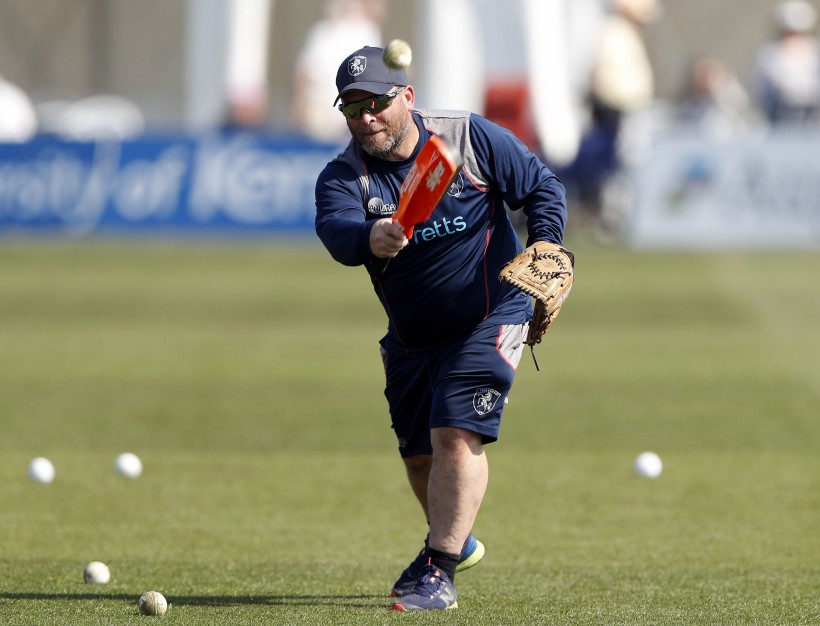 With their number one goal of remaining in the Specsavers County Championship top-flight achieved, Kent Cricket’s Head Coach, Matt Walker, is pleased with the progress made by Kent’s first-team squad in 2019.

Though both this summer’s white-ball campaigns ended in disappointment for the Spitfires, Kent remained in contention through to the final game of the season to take fourth place in the Specsavers County championship top-flight.

That represented their best finish since David Fulton guided the county to the first division runner’s up berth back in 2004 – a scenario that Walker would have accepted at the start of the season.

“I’d have been happy with that, most definitely,” said Kent’s 45-year-old Head Coach.

“At the very start of the year we were the bookmakers’ favourites to go straight back down.

“I also read some of the stuff on the fans’ forums online, saying we weren’t good enough and we’d struggle to compete. I never believed any of that.

“I knew the squad I had and I had an idea of what might happen and how my players would perform when meeting the challenge of stepping up a level.

“If you’d said to me we’d be pushing for third come the final game you might have raised my eyebrow and I’d have said ‘I’d like to think we could’, but as the season went on, and you saw how the lads did face up to their challenges, then I’m content. Absolutely so.”

Walker added: “We’ve beaten some very good sides, we’ve won at four Test venues in Edgbaston, The Oval, Trent Bridge and Headingley; so, when the dust settles, I think finishing fourth is a pretty good achievement.

“Those wins should give us a huge amount of confidence going into next year, knowing that we can compete and beat these top Division One sides.”

On the individual front, three Kent bowlers; Darren Stevens, Matt Milnes and Harry Podmore, finished the summer with 50-plus championship wickets. Podmore was rewarded with his county cap, as was Adam Milne back in August for his exploits in the Vitality Blast over three years at the club.

“Those statistics speak a lot about where this bowling group have got to this summer,” said Walker.

“Harry came on board last year needing a fresh challenge and a new home if you like, and he’s really embraced all that. He finished with 40-odd (wickets) last year behind Matt Henry’s extraordinary feats.

“So, 50 wickets in his second full season is an outstanding achievement.

“The same can be said of Matt Milnes, except he’s done it in his first full season as a professional cricketer.

“We knew what we were signing with Matt, we knew the quality he possesses, the type of bloke he is and his ambition.

“For him to perform as he did, he should be extremely proud of himself. Not many people get 50 wickets in their first full summer.

“And as for ‘Stevo’, he had about 16 wickets from the first half of the season and ended up with 52. That was a remarkable finish for him that helped seal his new contract.”

On the batting front, only Daniel Bell-Drummond and Zak Crawley garnered in excess of 800 runs, but it was Sam Billings with 366 at an average of 61 from four starts who topped the Championship averages ahead of Joe Denly, who scored 504 in 11 innings.

Walker added: “The batsmen set the games up with their runs, but it’s your bowlers do the donkey work to win you games of cricket.

“It stands us in good stead to know we have three bowlers to have taken 50-plus wickets, as well as a young, dynamic batting line up who are moving in the right direction.

“It’s no surprise that Zak has ended the year with an England call because everyone here has had high expectations of him.

“He works extremely hard, pushes himself, has high expectations of himself and is ultimately an extremely good player.

“To come into this side, open the batting and meet the challenge full on by scoring a couple of hundreds in his second full year is just brilliant for him and he deserves his players’ player of the year award.

“He worked in Australia last winter and came back a level above. Without Joe and Sam, he became our best batter across all formats, aged just 21. England now see what we see and I’m very proud of him.

“As for Ollie [Robinson], he’s another Kent lad to have a remarkable year with well over 700 runs, a couple of hundreds and he’s taken 54 catches too.

“He made the starting ‘keeping position his own at the start of the season, and has gone from strength to strength.

“Robbo has repaid us in spades for that tough decision, he’s looked high class in pressure situations and, at times, has looked like he’s been out there for 10 years, let alone 10 months.”

Finally, Kent said farewell to Mitch Claydon, the Aussie-born bowler who has joined Sussex after a six-year stint at Canterbury. Off-spinner Adam Riley was also released after eight years at Kent Cricket.