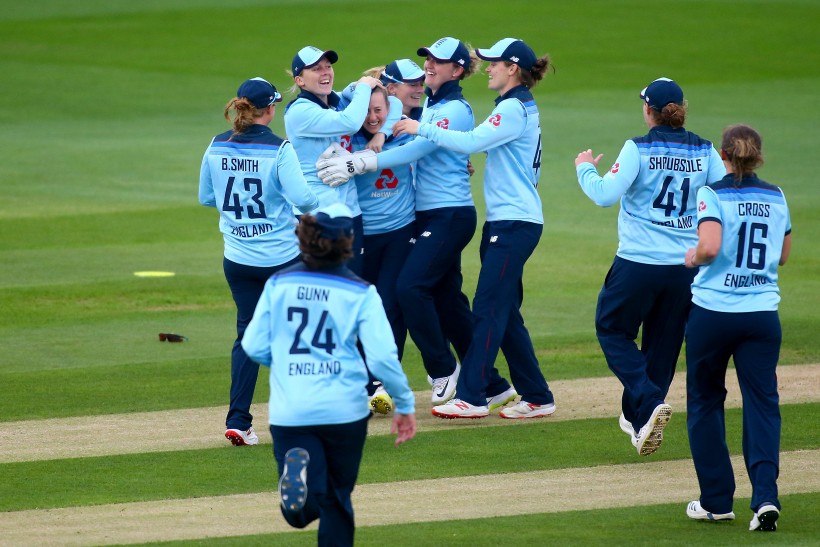 A jaw-dropping diving catch from Kent Women’s Fran Wilson was the main talking point of England’s ODI win over West Indies at Chelmsford, with the hosts completing a Royal London One-Day Series clean-sweep.

Opening batter Amy Jones celebrated her 26th birthday in style in Chelmsford, scoring 80 runs and picking up the Player of the Match and Player of the Series awards.

Jones put on 84 with Kent captain Tammy Beaumont (46) for the first wicket and 87 with Sarah Taylor for the second before an excellent catch in the deep by Britney Cooper saw her dismissed.

Taylor kept the run rate high, hitting 70 off 61 balls to see England past the 200 mark and to take her personal tally past 4,000 runs in ODI cricket. Some ferocious hitting by captain Heather Knight (40* off 19 balls) took the total to 258/4 from the rain-adjusted 39 overs.

Set 267 to win from 39 overs the West Indies innings started in exciting fashion. Hayley Matthews hit a huge six over long-on in the second over but then fell to the stunning diving catch by Fran Wilson at cover the very next ball.

Debutant Bryony Smith picked up her first international wicket with the dismissal of Natasha McLean and finished with 1/20 from eight overs as the visitors’ chase failed to gain momentum.

The win gives England their 13th in a row in all competitions and, more importantly, moves them a step closer to qualification to the 2021 ICC Women’s World Cup. England move to the top of the ICC Women’s Championship with 24 points.

England captain Heather Knight said: “We’re really pleased to have won 3-0 and to have been ruthless throughout the series.

“Amy [Jones] has been fantastic at the top of the order – as has Tammy – and it was great to see Sarah showing what a good player she is today.

“We talk a lot about the importance of fielding and Fran’s catch was special. That’s the kind of thing that can win you a close game and we’ve got a lot of big games coming up so that bodes well.

“It’s 13 wins in a row now, which is great, and it obviously moves us a step closer to New Zealand in 2021. We just want everyone to keep working hard and to keep pushing to get better every game.”

When the World Cup came to Tunbridge Wells