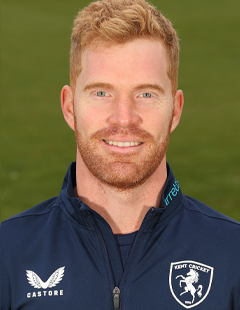 Ben Compton signed for Kent on a two-year contract in October 2021.

The left-hander featured for Kent Second XI in the 2019 Second XI Championship, making 116 not out on debut, scoring successive hundreds against Middlesex and Sussex, and averaging 62.40 from eight matches.

Grandson of Denis and a cousin of Nick, Compton made his debut for Kent in 2022’s County Championship curtain raiser against Essex at Chelmsford – where he would record a new first-class best score – 129 runs opening the batting from 289 deliveries.

Following his exploits at Chelmsford, Compton scored 104* on home debut against Lancashire at The Spitfire Ground, St Lawrence – becoming the first men’s player to score two hundreds in their first two first-class innings for the county after Martin van Jaarsveld’s debut in 2005 against Warwickshire.

Compton’s innings against a Lancashire attack including the likes of Pakistan’s Hassan Ali was also the first time a Kent Men’s batter had carried their bat through an innings since Daniel Bell-Drummond in 2017.