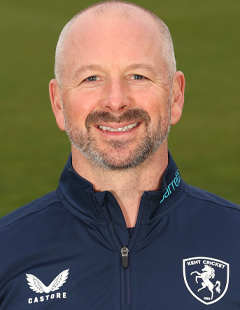 Darren’s debut came in 2005 in a 50-over match against Hampshire, in a team that included current Head Coach Matt Walker, and current Bowling Coach, Simon Cook.

16-years, 20,000-runs, over 800-wickets, and over 580-matches later, Darren is still approaching the crease at The Spitfire Ground, much to the dismay of batsmen all over the country.

A fan favourite, Darren as earned cult hero status in Canterbury because of his cheery nature and evergreen performance. Debuts in all three formats came in 2005, and he was part of the 2007 Twenty20 Cup winning team.

First-class best bowling figures of 8-75 came against his former county, Leicestershire, and in List-A cricket, he ravaged Surrey in 2018, finishing with figures of 6-25 as Kent went on to lose to Hampshire in the final at Lord’s.

‘Stevo’ was due to leave Kent after the 2019 season, but 36-wickets in his last five Championship games, accompanied by a career best score of 237 against Yorkshire at Headingley secured a one-year extension for the 2020 season.

The 2020 season was frustrating for everyone, but Darren, then 44-years-young, took it in his stride and took 20 wickets at just 19.7 in the newly created Bob Willis Trophy.

After his performances in 2020, Stevens was named as one of Wisden’s Five Cricketers of the Year going into 2021 – the 30th Kent star to receive such an accolade.

In 2021, Stevens became one of two Kent stars that have won a T20 trophy with Kent as a player, being a part of the side that won the Vitality Blast at Edgbaston on 18 September.

He was also named Men’s Player of the Year by Kent’s Members and supporters in 2021, an accolade that he has retained from the 2019 and 2020 seasons, too.