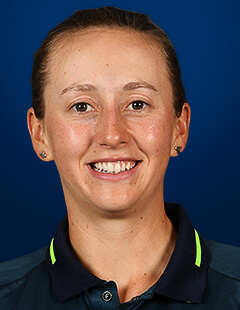 A fluent and technically correct batsman, Fran Wilson was unlucky to be absent from the international scene between 2011 and 2016, suffering from a somewhat conservative selection policy.

Selected in an ECB Development XI for the Women’s European Championship in August 2010, she impressed the selectors with scores of 76 against the Netherlands and 53* against Scotland, and made her ODI and T20 debuts on England’s tour of Sri Lanka three months later. She was retained for the tour of Australia in early 2011, but she fell to two golden ducks in the two matches she played, and was not recalled again until the 2014 World Twenty20, where she remained on the bench throughout the tournament.

A move from Somerset to Middlesex at the start of the 2015 season, to enable her to play in Division 1 of the County Championship, saw her finally fight her way back into contention and she was called up to the squad for the Canterbury Ashes Test, but was once again forced to watch her side from the sidelines as 12th man.

However, she was the only addition to the list of the centrally contracted players in December 2015, and was recalled to the England squad for the 2016 Pakistan series. In her first time back in an England shirt for five years, in the second T20 at Southampton, she hit 43 not out to win the match for her side. Raf Nicholson