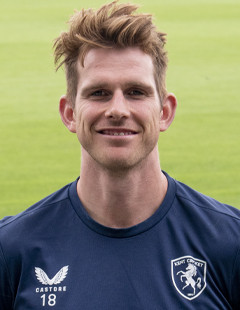 Kent signed Fred Klaassen, a tall left arm seamer, ahead of the 2019 season. His first-class and Kent debut came against Loughborough MCCU in their season opener.

Since then, he has featured primarily in white-ball cricket for Kent, finding a home in the Club’s T20 bowling attack as a consistent left-arm threat. He played every game of our 2019 T20 campaign during his first year as a Spitfire, taking 10 wickets with best figures of 2-24 coming against Gloucestershire at The Spitfire Ground, St Lawrence.

He was a prominent figure in Kent’s charge to their first trophy in 14 years during the 2021 Vitality Blast, playing in all-but-one match due to COVID isolation and finishing the tournament with 19 wickets at an average of 19.63. He also took then career-best figures of 4-17 in the Semi Final against Sussex Sharks.

Klaassen also plays international cricket for the Netherlands, and has done since 2018. He was an important part of the Dutch side that qualified for the 2021 T20 World Cup, playing in the tournament itself for the Oranje.