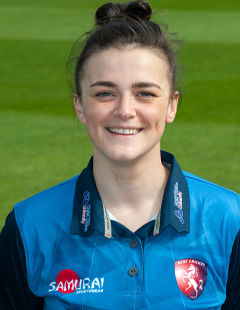 Lewisham born Grace was awarded Women’s Cap number-46 in recognition of her contribution to Kent Cricket. She has won three County Championships and one Twenty20 Cup since making her debut in 2012 and has become one of the squad’s senior players. A well respected figure, she also plays for the South East Stars and has represented the England Academy. Recently, Grace has developed into an all-rounder with some very handy contributions with both bat and ball. She scored her maiden senior Kent 50 against Middlesex in May 2021, as Kent won both T20s in a double header against Middlesex at the County Ground, Beckenham.