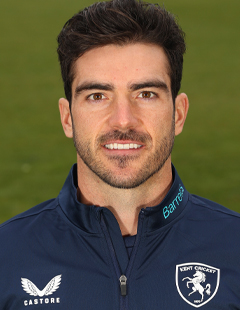 Fast-bowling all-rounder Grant Stewart signed his first professional contract for Kent in 2017 after his 2nd XI form promised he could alleviate the county’s shortage of pace bowlers.

Australian-born Stewart is not classed as an overseas player as he has an EU passport through his Italian mother.

A qualified civil engineer who grew up in New South Wales, he made his first-class debut as a bowling allrounder in the final game of the 2017 Championship season.

Better was to come in Kent’s promotion season in 2018, led by an extraordinary display in a floodlit rout of Middlesex at Canterbury.

Only playing thanks to the absence of Matt Henry and Darren Stevens, he had taken four wickets in as many games in his first-class career when he took the new pink ball, but two hours later, he had his maiden five-wicket haul as he swung the Dukes ball under the lights.

He then followed up his career-best 6 for 22 with a lusty 103, his maiden first-class hundred arriving in just 73 balls.

Stewart was a part of the Kent Spitfires side that won the Vitality Blast in 2021, but personally for the all-rounder, his T20 performances earned him a call-up for Italy ahead of their ICC Men’s T20 World Cup Europe Qualifier held in Spain that October.