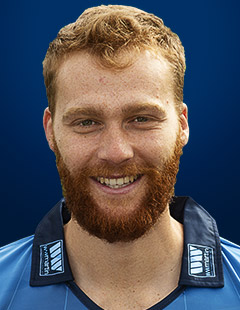 In 2012, he impressed during his first season as a professional cricketer but was sidelined in 2013 and 2014, hampering his progress. However, the young seam bowler is highly thought of at the Spitfire Ground, St Lawrence.

He made his first-team debut against Essex in 2012 and returned 2-29 from a miserly 16 over spell to prove that he could be a key component for the county in the years to come. Ivan also didn’t look out of place against the touring South Africans that season as he clean bowled JP Duminy after being entrusted with the new ball.

The towering quick joined the Kent Academy for the 2011 programme, after shining in the Kent League with Blackheath. He quickly impressed in the nets and was rewarded with his first professional contract for the 2012 season.

A former pupil at the John Roan School in Blackheath, Ivan has all the attributes to become a quality fast bowler and has been likened to former England paceman Chris Tremlett.

2015 was the best year of Thomas’ career to date as he claimed 27 first class wickets before injury again plagued him in 2016.

He started 2017 in style, claiming nine wickets in four matches on the FGS Plant Tour but was again ruled out for most of the season through injury.