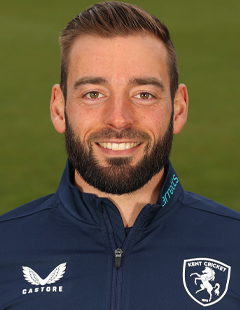 Jack Leaning signed for Kent from Yorkshire on 1 October 2019.

He quickly asserted his authority at the crease in Canterbury, scoring 220* in only his second match for the Club and his first at The Spitfire Ground, St Lawrence.

He shared an unbeaten 407-run stand with Jordan Cox (238*) as Kent amassed 530-1 against Sussex in 2020’s Bob Willis Trophy. This was Kent’s highest ever partnership for any wicket, and laid the foundations for a victory by an innings and 25-runs.

He became a Vitality Blast champion in his second season as a Kent player, helping the county secure their first trophy in 14 years at Edgbaston on 18 September.

Leaning was also appointed as Kent’s captain ahead of the 2021 Royal London Cup, and signed a three-year contract extension after an impressive 2021 season for Kent, after being named as Men’s Batter of the Year at the 2021 Spitfire Kent Cricket Awards.

He was awarded his Kent cap (no.221) at Lunch during Kent’s County Championship match with Middlesex, one that Kent would go on to win and secure top spot of Division Three.