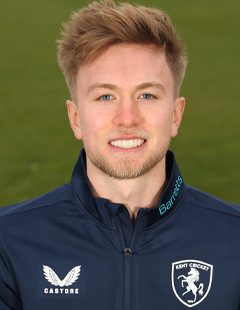 Left-arm spinner Logan joined the Club on a short-term contract after he impressed as a trialist for the Club’s Second XI in 2021.

He impressed with economical figures of 1-4 on debut against Hampshire Hawks during the 2021 Vitality Blast, a tournament that Kent went on to win.

He took three wickets on Kent first-class debut, away at Lancashire, in Kent’s trip to Old Trafford in the 2021 County Championship.

Logan then was named a part of Kent’s squad for the 2021 Royal London Cup, making his List A debut as a Kent player, before being awarded with a permanent contract that would run until the end of the 2023 season.