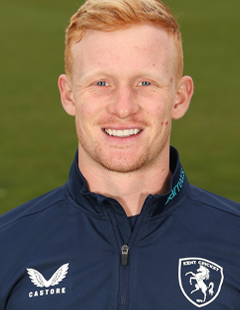 Jordan Cox, a Kent Academy graduate and another wicketkeeper-batter in a long line of such specialist players to play for Kent, made his Kent debut against Pakistan in a List A friendly in 2019, scoring 21.

His competitive debut came against Hampshire in the same season in the County Championship, opening the batting in the first innings.

In the 2020 Bob Willis Trophy, Cox scored 238* against Sussex and shared a 407-run partnership with Jack Leaning (220*). This broke Kent’s all time record partnership for any wicket, and set up a dominant victory, as Kent won by an innings and 25-runs.

This was the highest maiden first-class century in the Club’s history, and alongside Leaning, became the first Kent pair to score double hundreds in the same innings since 1937.

He also became the first player born in the new millennium to score a first-class double hundred in England.

In 2021, Cox made headlines around the world after a Player of the Match performance in Kent’s victorious Vitality Blast Final victory on 18 September, the Club’s first trophy in 14 years.

After top-scoring with 58 not out from 28 deliveries, Cox produced one of the finest pieces of outfielding ever seen to dismiss Lewis Gregory. With the ball destined to head for six runs, Cox sprinted to meet the trajectory of the ball, jumped outside of the playing area to palm the ball back into play for Matt Milnes to complete the catch, earning him the moniker of “Air Jordan”.

Overall in that tournament, Cox averaged 52.42 with the bat, scoring 367 runs in 12 innings, finishing five of them not out. This included a smashed 64 runs at the death in another important partnership with Jack Leaning.

At the 2021 Spitfire Kent Cricket Awards, Cox was named as the Club’s first ever Men’s Young Player of the Year, as well as, unsurprisingly, being named Men’s Fielder of the Year.