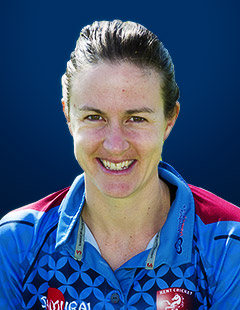 Kent batsman Lydia Greenway is the head coach of the seven-time county champions.

The 31-year-old left-hander retired from international cricket last summer after a 13-year career and 225 appearances for England and is delighted to accept the new role.

The Farnborough-born player was one of the first Kent Cricket Academy graduates, in the first intake with fellow Kent and England batsman Joe Denly.

Greenway said: “I’m delighted to take on the new role as I make the transition from player to coach.

“The senior players at Kent have always taken on the responsibility of coaching and mentoring the younger players so it’s a natural progression.

“I look forward to working with the current squad and bringing through more players from our excellent age-group performance squads.

“We’re proud of our achievements and will be working hard to defend the double in 2017 as the competition gets tougher every year.”