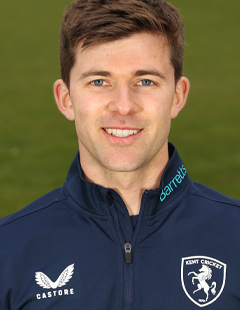 Marcus was part of the Kent Academy before heading to University.

He then returned and impressed for the Second XI in 2019, particularly in the Second Eleven Trophy (50 overs). He was pivotal in Kent winning the competition, and in the final, played at The County Ground,Beckenham, he picked up 4-43 from his 10-overs.

He removed Scotland international Michael Jones for 60, who was his first scalp as Marcus dismissed 4 of Durham 2s’ top 5. He would have had a 5-wicket-haul had it not been for a dropped catch on the boundary in the closing overs of the final, which Kent won by 16-runs.

Shortly after, Marcus was offered a professional contract at Kent, where he was named in a number of T20 matchday squads before making his debut against Surrey at the Spitfire Ground, St. Lawrence. Kent went down by 1-run but Marcus impressed with his off spin going for just 13 off his 2 overs, and didn’t have the chance to bat.

He made his County Championship debut against Nottinghamshire at Trent Bridge. Kent won by 227-runs with Marcus scoring 12 and 9, along with match figures of 7-0-33-0. In 2020, in the Bob Willis Trophy, Marcus scored his maiden First Class half century, scoring 52* as he guided Kent to a successful fourth innings chase of 181.

At the 2020 Spitfire Kent Cricket Awards, O’Riordan was named as Kent’s first ever Emerging Player of the Year, and became the first recipient (although virtually due to COVID), of the McCanlis Cup.